The Democratic Congressional Campaign Committee (DCCC) threw an early tomahawk at freshman U.S. Rep. Leonard Lance (R-Clinton) this week when it added his name to its so-called Republican Hypocrisy Hall of Fame, a move Lance laughed off today as woefully off-the-mark.

After Lance identified the Green Brook Flood Control Project as a “shovel ready” endeavor worthy of $15 to $20 million for completion under the provisions of the $819 billion federal stimulus package spearheaded by President Barack Obama and congressional Democrats, the DCCC jumped on the apparent contradiction of Lance’s “no” vote on the federal stimulus bill.

“It’s no surprise that House Republicans are betting on failure, while President Obama and Democrats are investing in success,” said DCCC Communications Director Jennifer Crider, citing the GOP’s opposition to a man in the U.S. Congress of the federal stimulus package. “But now when they think no one is watching, House Republicans are hedging their bets by opposing economic recovery in Washington and then taking credit for the bill’s spending in their districts. Times are tough, and struggling families can’t afford any more of the House Republicans’ ‘just say no’ economic gamble.”

Making an appearance at the special convention at the Clinton Township Middle School after attending the Union County Republican Convention today, Lance said he preferred a GOP alternative stimulus package proposed by Republican Whip U.S. Rep. Eric Cantor (R-Richmond) to what he saw ultimately as a bloated Democratic offering. 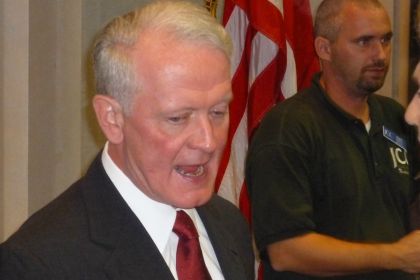