MOUNTAIN LAKES – Intent on keeping gubernatorial candidate Chris Christie pinned down in a Republican primary, the rightward flanking duo of former Bogota Mayor Steve Lonegan and Assemblyman Richard Merkt (R-Mendham) claimed credit – and victory – this evening for having budged Christie to his current stance on the Council on Affordable Housing (COAH).

On Thursday, Christie told a Monmouth County crowd that he would “gut COAH and put an end to it,” evidently the first time on the campaign trail that he has spoken of outright scrapping the agency, which mandates low and moderate income housing in all of New Jersey’s 566 municipalities.

Merkt and Lonegan applauded Christie for appearing to adopt their position, but also read the GOP frontrunner’s change-up as a sign that he’s not tough enough on the issue, and worry that he could be susceptible to equivocation regarding other core conservative positions.

“Four years ago during the gubernatorial primary, I put out a tabloid attacking Jon Corzine’s COAH plan of 100,000 units of affordable housing,” Lonegan said. “Three weeks ago, Chris Christie was telling people he wanted to change COAH. What he’s doing is he’s putting his finger in the wind. He’s going where he thinks he can get the most votes. He’s adopting a position he thinks he needs to adopt to win a primary.”

Merkt said his own position regarding COAH has been consistent since he filed legislation two months ago calling for its abolition.

He said Christie’s Thursday statement on the subject “shows he’s beginning to learn about the issue and that’s a positive. But what does ‘gutting’ mean? In construction, you demolish the walls and roof and leave a foundation. That’s ‘gutting.’ I hope that’s not what he means. The point is I still don’t know. He has to answer a simple question. ‘Will you kill COAH, yes or no? For that matter, will you fire the state Supreme Court, including Chief Justice Stuart Rabner, yes or no?

“I’d be more than willing to teach him about these issues,” Merkt added. He’s a bright guy but he needs more coaching. In the meantime, I welcome all the candidates to follow my lead.”

For both Lonegan and Merkt, Christie’s personal connection to Chief Justice Stuart Rabner, a former Christie employee at the U.S. Attorney’s Office, renders him incapable of convincingly waging what they see as the necessary fight against the court to overturn decisions such as Mount Laurel, which led to COAH.

“Let me make myself clear,” said Merkt. “I would not appoint or re-appoint any sitting member of the New Jersey Supreme Court, including Chief Justice Rabner. Of course, Chris was quite enthusiastic about Rabner’s appointment. If he's just going to keep his buddy on the Supreme Court, that's not good enough.”

A longshot behind fellow conservative Lonegan who has a grassrootsorganizational edge, Merkt added, “I feel like the father confessor of Chris’s whole program. I wanted the opportunity to frame the debate, and I’m framing the debate. In my view, the campaign is already a success.” 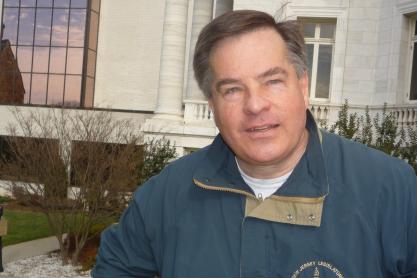