Just days after Cantor scrapped the local Republican Party as a band of naysayers and became a Democrat, the MarlboroTownship Council on Thursday night voted unanimously in favor of a resolution calling on Democratic Party leadership in Trenton to step up and abolish the Council on Affordable Housing (COAH).

The governing body undertook the resolution at the request of Hornik, widely seen as a Democratic Party rock star and potential opponent for state Sen. Jennifer Beck (R-Monmouth) in 2011.

“We should be focused on keeping taxes stable. To overlay the social demand of COAH at this time is irresponsible,” said Hornik. “When something’s broken, it’s time to revisit the whole structure, and I think in the case of COAH, it’s time to start at square one. I think we’re at that point right now.”

From Thursday’s resolution: “Mayor Hornik and the Council find that the creation of affordable housing is an important governmental objective however, the fostering of same must take into account existing economic conditions and more importantly, orderly and sound planning, as well as the ability of a municipality to absorb and service said housing through a viable and efficient infrastructure which is capable of supporting such development; WHEREAS, Mayor Hornik and the Council find that the Rules have not accomplished this goal and instead of defining and clarifying a municipality’s means and methods of satisfying its Mount Laurel obligation and instead of allowing for orderly and reasoned planning and development, the rules have brought about greater confusion, (and) left the rights of all participants unsettled and indeterminate…”

Part of the irony in a gubernatorial election year is that Hornik’s unabashed anti-COAH crusade puts him squarely on the side of Republican gubernatorial candidates former Mayor Steve Lonegan and Assemblyman Richard Merkt (R-Mendham) and to a lesser extent former U.S. Attorney Chris Christie, all of whom have called for the end of COAH in the face of stepped up affordable housing rules initiated by Assembly Speaker Joe Roberts (D-Camden).

In his public appearances, the front-running Christie has mostly badmouthed COAH and come up just short of saying the state should scrap it, with the exception of his appearance at the Lincroft Inn in Monmouth County when he went the distance and promised, “I will gut COAH and I will end it.”

Cantor says there’s no irony at all, only one more example – in addition to the mayor's tough call decision to layoff nine township employees -of Hornik putting principle over party, which is why Cantor elected to change parties in the first place.

“It really is a local decision on my part,” said the councilman. “The Democrats are doing such positive things here, and unfortunately the Republicans in Marlboro operate with an eat your own mentality. There are a couple of good people in the party, but mostly it’s who’s vying for power. Meanwhile, Jon’s the type of guy who’s doing the right thing for the residents of Marlboro.”

Hornik says under the latest provisions of COAH, his already densely populated town is obligated to build 1,700 homes.

“You know when you have kids around a table and one is always trying to get the most? Well, in my town, COAH is the biggest mouth at the table,” Hornik said.

The council undertook its resolution in front of a packed crowd of residents protesting the creation of 275 affordable housing units, and in the aftermath of Hornik’s submission of an affordable housing plan to the state “under protest.”

“I’m disappointed Gov. Corzine hasn’t come out against COAH,” said Cantor, descrying as not strong enough the governor’s plan to delay by a year the implementation of a 2.5% tax on commercial development for the creation of affordable housing units.

“Ultimately, it (COAH) has to change,” Cantor explained. “The way it’s designed now, it hurts towns like Holmdel, Marlboro, Howell, etc. The only thing it had going for it was the ability to perform RCAs (regional contribution agreements, enabling a town such as Marlboro, for example, to swap its affordable housing obligation into an urban area such as Trenton), and now that was abolished.”

In a Dec. 22, 2008 letter he wrote to Lucy Vandenburg, executive director for COAH, Hornik expressed frustration over having to undo years of work in the area of RCAs in order to comply with stringent new state rules.

"Marlboro and the City of Trenton have for years negotiated and relied upon an RCA agreement which would send $8.3 million dollars to Trenton to help construct much needed affordable housing in our region," the mayor wrote."This agreement dates back to July 1, 2004, which is over four years ago. The agreement embodying this RCA went before COAH less than one month after it was entered into. When Marlboro petitioned again in December of 2005, this RCA was front and center in the Township’s then-petition. Subsequently, both municipalities have continually relied on the agreement, recently (in 2008) both municipalities have reaffirmed their desire to move forward with the RCA, and, both have continually planned for its viability. Marlboro has even obtained the Mercer County Planning Board’s approval for the RCA and Trenton has produced a project plan as to how the funds will be spent to assist in the completion of regional affordable housing projects…

"Yet, despite the above facts, and the fact that Marlboro has collected funds for years planning for this RCA, and the fact that municipalities have been able to plan for RCA agreements for over 20 years,Marlboro was told just five five months ago to scrap any plans for the RCA and find another alternative," Hornik added."In essence, Marlboro has to reverse direction after years of planning and reliance."

Several local sources saidthe mayormight have been gearing up for a District 12 Assembly race this year to better spring board himself toward the state Senate in 2011, but he says no.

“I’m not running for the Assembly,”Hornik told PolitickerNJ.com. “I’ve got a mountain of a job I’m doing in my town. It would be abandoning what I’m going in my town right now. It’s not even on my radar screen.”

As for Cantor, “I’m considering running for council again this year,” he said. 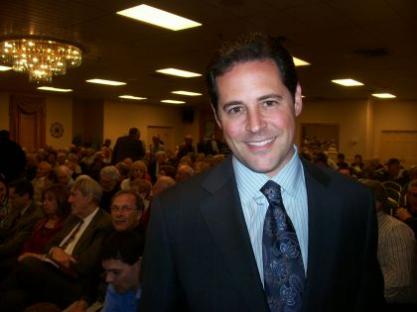