MOUNTAIN LAKES – He appeared at Tony Bucco, Jr.’s pasta dinner at the Zeris Inn last night, and was the first to RSVP Doug Cabana’s campaign, saying he planned to attend the candidate’s Friday night fish fry next week, but Morris County Freeholder Jim Murray hasn’t decided whether he intends to run for governor.

“I’m still mulling it over,” he told PolitickerNJ. “We need to shake things up in Trenton.”

But to date he remains an organization outsider and his public soul-searching now over whether he will force a long-shot clash with former U.S. Attorney Chris Christie in the Republican primary for governor circulates among Morris County party members as a going topic of bewilderment. 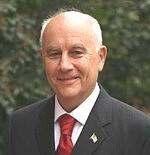