Morris County Freeholder Jim Murray today confirmed to PolitickerNJ.com that he is considering a Republican Primary run for governor.

“We need to shake things up in Trenton and do something to lower taxes,” said the first term freeholder, a 70-year old retired municipal engineer who two years ago unseated John Inglesino, a confidante of Chris Christie, now the GOP’s frontrunner for governor.

“We need to prioritize the taxpayers. I’m concerned about that,” Murray said. “There are also other things. New Jersey has the highest number of state mandates. There are a lot of environmental regulations. We should look at that. We really need to stimulate the private sector of the economy. I really am considering this."

Although the Chester-based freeholder lives in Christie’s political wheelhouse, Murray insists his interest in battling for governor is not personal, nor does he want to get in the race to try to notch another win over Inglesino, who was one of four candidates pursuing three seats on the freeholder board when Murray beat him.

“I think it’s good to have several candidates in the race,” Murray explained. “They can come from anywhere in the state. Morris County is one of most highly thought-of counties in the state. There are a lot of good people here. Voters will pick the best candidate. I have high regard for John Inglesino. We’ve gotten to know each other, and for that matter, I think Chris Christie is outstanding. I just have some different viewpoints and I want to play a part and give the voters a choice. If possible, I want to use my commitment to build a better state. It’s good to have a competition."

Murray said he intends to make his decision regarding a run over the next two weeks. He said he needs to probe the landscape and be convinced that there is interest in his candidacy. If he’s convinced there’s interest, he’s running.

“It’s not an easy job, even for someone with a lot of experience,” he said. “You have to be able to make tough decisions. I feel I can make the tough decisions without being pressured by special interests. I would like to look at the Highlands Act, and bring balance between environmental and economic concerns. I would like to see more growth in the Highlands. I also probably differ with the other Republican candidates on the issue of the (federal) Patriot Act, which I believe infringes on the U.S. Constitution. I would not want to support that.” 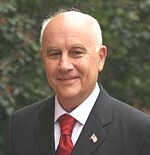