New Jersey Republicans will face some pressure from the national GOP over the next few months to settle on their candidate to challenge freshman U.S. Rep. John Adler (D-Cherry Hill) in 2010. Adler won the seat of retiring twelve-term Republican Jim Saxton last year with 52% — the first Democrat to win the seat since Thomas Ferrell ousted two-term Republican George Robeson with 50.1% in 1882.

Republicans think they can beat Adler next year, but the National Republican Congressional Committee is sending signals that they want the candidate in place soon so that he or she can begin fundraising. That's what Adler did in 2006, before Saxton had announced his intention to retire. If the third district Republican candidate does not meet certain early fundraising goals, sources say that the NRCC might not become fully engaged in the race, according to one House Republican staffer familiar with NRCC operations.

So far, one candidate has said he expects to run: former Tabernacle Committeeman Justin Murphy, who surprised political observers last year when he won 25.2% of the vote in the Republican primary for Congress. Murphy finished third, just 37 votes behind Ocean County Freeholder Jack Kelly, who had the powerful organization line in Ocean.

Christopher Myers, the former Medford Mayor who came close to beating Adler in a strong Democratic year, has not yet announced if he'll run again. Other possible Republican candidates include: State Sen. Diane Allen (R-Edgewater Park); Assemblywoman Dawn Addiego (R-Evesham); and Assemblyman Brian Rumpf (R-Little Egg Harbor). Ocean County Republicans are anxious to nominate a candidate – Ocean has never sent a local resident to Congress – and GOP County Chairman George Gilmore could pick one of his Freeholders, perhaps Gerald Little, John Bartlett, or the venerable Joseph Vicari, to run. Another possible candidate is the Rev. Aubrey Fenton,an African American minister from Willingboro who lost his bid for re-election to the Burlington County Board of Freeholders in 2008.

The problem for Addiego, Rumpf, Little, and Bartlett is that they are all running for re-election to their current posts this year, which could make an early announcement for a race against Adler more difficult. But Adler ran for re-election to the State Senate in 2007 as an active, albeit unannounced, candidate for Congress. Voters in the sixth legislative district didn't seem to mind.

Insiders from both parties seem to think that Allen is Adler's strongest potential challenger. A veteran legislator well known from her days as a television news anchor for a Philadelphia-based network, some pundits think she would have held the Saxton seat for Republicans in 2008. Allen was interested in running, but ended her campaign early amidst a political feud with the Burlington County Republican organization. That feud is ongoing.

Allen suffered some health issues earlier this year – she was hospitalized with pneumonia, but her friends say she has fully recovered and almost itching for a fight. She faces two potential obstacles if she wants to run against Adler: the support of her home county organization, and the possibility that she might receive consideration as a candidate for Lt. Governor this year. If Allen gets in the race for Congress, she'll have to abandon any hope of running statewide this year.

Former major league baseball pitcher Al Leiter, a Toms River native with political ambitions, told PolitickerNJ.com last year that he would not be a candidate for Congress in 2010. 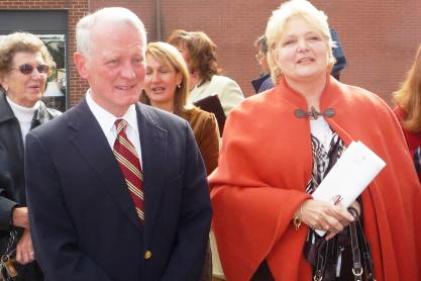