HACKETTSTOWN – Pro-life and pro-gun, Warren County Freeholder John DiMaio calls himself the most conservative candidate in the race for the vacant District 23 Assembly seat even though he started his political career in the opposing party.

The president of A. DiMaio & Son, Inc., a general contracting company he co-founded in 1977, hecame up the hard way, working in a family business that taught him early the value of a dollar and that honed his instincts for survival and self-sufficiency.

At 53 now, the Republican’s been around a little longer than his Hunterdon County competitors, Freeholder Matt Holt and Freeholder Erik Peterson, and he’s punched more time at the local level, having served 11 years on the Hackettstown council and then an additional nine years as mayor before winning a seat on the Warren County Freeholder Board.

He spent 14 of those years in Hackettstown as a Democrat, and not surprisingly in this increasingly competitive GOP terrain heading toward Saturday’s special convention, that’s the first fact about DiMaio’s background his opponents’ surrogates highlight in casual conversation.

The first, and last.

“DiMaio, yeah. Good guy. He was a Democrat, you know? Was a Democrat for years up there in Hackettstown. You didn’t know that? Yeah, a DEM-O-CRAT. DiMaio, the Democrat.”

The candidate has a ready-made rejoinder in the face of what is by now a predictable, incessantline of attack.

“I started out as a Democrat,” he admits. “So did Ronald Reagan. I’m the true Ronald Reagan Republican conservative in the race.”

Even when he was a Democrat he insists he was more conservative than the Republicans in Hackettstown. As a freeholder seated on a three-member board, DiMaio helped reduce the county debt to nonexistent levels, he says.

If the joint county Republican Committee on Saturday sends DiMaio to Trenton, he promises to work to reduce state spending, return more money to the local level, reform the educational funding formula, scrap the current Council on Affordable Housing (COAH), and reform the Highlands Act.

“I understand what mayors go through every day,” DiMaio said. “I learned a grassroots, close-to-the-people kind of public service, and those values – plus the work ethic I learned from my father and grandfather – are what I would take to Trenton.”

One daughter graduated in May. A second, younger daughter is set to graduate.

“I’m at that point where I have the time to serve, I’ve been patient in public office, and I’ve learned from everyone I served with,” said DiMaio, who lost a bid for the Assembly in 2005. “I’ve learned so many different little things along the way. I served with (Mike) Doherty on the freeholder board. The mayor who was my predecessor, Pat Harper, had more courage than anyone I ever served with. When the police chief retired, she went outside the network and recruited a first class chief of police, who’s still serving to this day. She had courage. She knew what was right and she did it.

“To me, it’s maybe not one great thing that I did, but a thousand little things that hopefully added up to help people,” DiMaio added.

Whatever happens at Saturday’s convention, DiMaio’s guaranteed a place on the Hunterdon County organizational line, according to an agreement Hunterdon County GOP Chairman Henry Kuhl made with Warren County GOP Chairman Doug Steinhardt. Kuhl’s reasoning behind safeguarding a spot for DiMaio is to preserve organizational balance between the two counties in the 23rd District, to ensure representation for the less populous Warren, and to protect state Sen. Marcia Karrow (R-Raritan Twp.) against an off-the-line insurgent candidacy of Assemblyman Michael Doherty (R-Washington Twp), who is from Warren County. 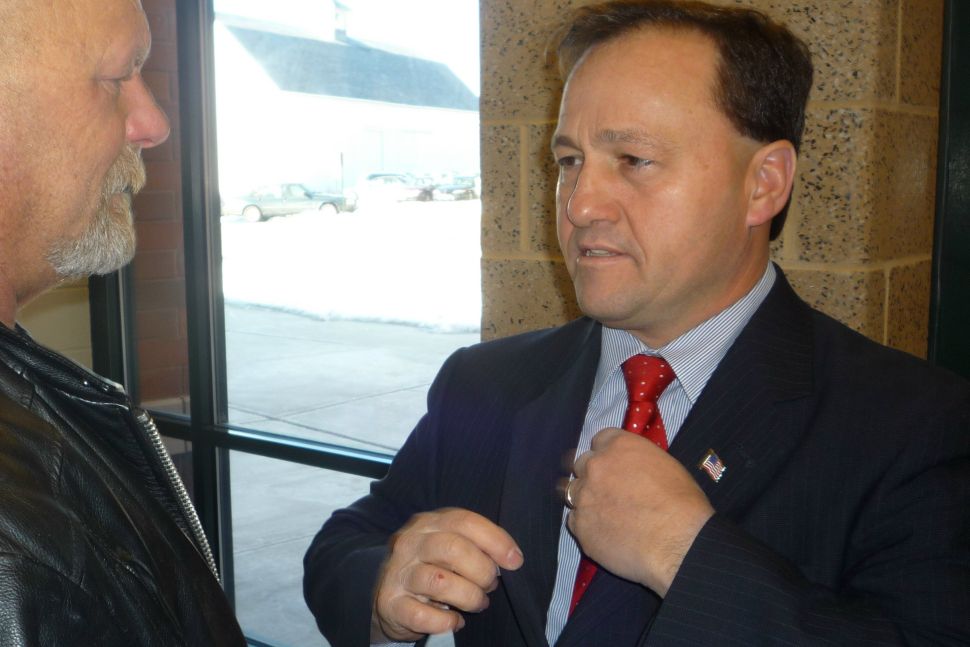