CLINTON – Freeholder Erik Peterson and Freeholder John DiMaio will meet on a second ballot, according to GOP counsel Mark Sheridan.

Freeholder Matt Holt is out.

"The reason it's taking so long is these are those newpaper trial voting machines," says former U.S. Rep. Dick Zimmer.

"There are still seven members from Hunterdon who have not yet voted," announced the chairman, towering above the crowd at the podium onstage.

He made the same exhortation a little later.

Then Warren County GOP Chairman Doug Steinhardt, Sheridanand Kuhl called the candidates up onto the stage and gave them the news.

There's some nervous muttering among DiMaio backers now. They had wanted the pro-choice Holt on a second ballot, but the conservative Petersonpresents a near mirror ideological image of their champion.

However – and this goes to the worry in the Peterson camp -Holt could tell his people to back DiMaio so that the two Hunterdon County candidates remain in contention as the district lurches toward a June Republican Primary and the likelihood that a second seat will be at stake.

With Sen. Marcia Karrow (R-Raritan Twp.) from Hunterdon at the top of the organization's ticket, it would be in Holt's interest to see DiMaio on the line.

That way hewould appear to survivetofight with fellow Hunterdon County Freeholder Holt for the third spot on the line – which would assuredly be for a Hunterdon, not Warren County, representative.

Of course,one consideration for Holt will be his reelection.

He's upagain this year onthe freehoder board. If his people put DiMaio over the top today, Kuhl can use that as justification to boot Holt off the line, either for freeholder or Assembly.

But ifHolt soldiers out his troops in favor of Peterson, then Kuhlwould have a good argument to back Holt's return to the board.

Hampton MayorRob Walton is waiting to run for freeholder. And remember… he nominated Peterson.

The voting lines stretchup the wings of the auditorium. 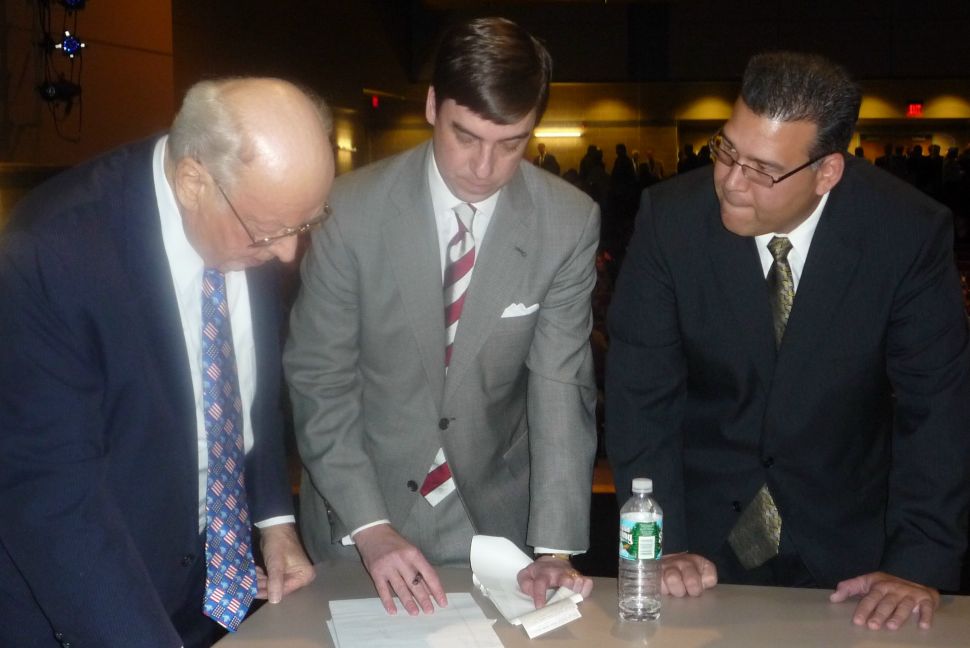