CAMDEN – Ensconsed in the trappings of Democratic Party power, hometown hero state Sen. Dana Redd (D-Camden), whose parents were the victims of a double homicide whenshe was eight years old,today announced her candidacy for mayor with a promise to bringa crime-beleagured city back to waterfront glory.

"Let's put an end to the petty, counter-productive bickering, no more fighting, ward against ward, black against Hispanic. I'm declaring it today, it is over," said Redd in anatmospherestill energized by President Barack Obama'sJan. 20th swearing-in and his call for national unity.

The 40-year old Camden native entered the race with the blessing if not official backing of incumbent Mayor Gwendolyn Faison, 82, who stood briefly onstage and appeared to be just bucked up enough to make some “Camden first” comments in the face of party leaders who respectfully acknowledged Faison’s service before firmly throwing whatever heft they have behind rising star Redd.

"I'm the mayor that made Camden work," an almost defiant-sounding Faison said. "I'm here today because the city is bigger than me. My heart is with Camden. …I am here to support anyone who will help the City of Camden. That is my statement."

She said she had intended todeclare her intentions regardingher political future at a Feb. 23rd press conference, and gently made it known that Redd's presser today pre-empted her own plans somewhat.

Thenshe headed through the crowd andfor the tent flap and was gone, boundfor what party spokespeople explained was "a previously scheduled event."

When asked later if she expects to run with the formal support of Faison, Redd said hopefully, "I'm working on it."

Redd’s longtime political ally and friend Andrews noted the significance of this Centreville location for Redd’s kickoff, a kind of crossroads between two Camdens: between the old Roosevelt Manor lately transformed from a Housing Authority breakdown into a safer and cleaner neighborhood, and the still down-on-its heels Branch Village project.

Applauding Redd’s efforts to reclaim Roosevelt Manor, Andrews said, “She’s about being impatient about those things that have to be done… for children, families and seniors.”

Redd and Booker go back a decade now, and the mayor of Newark – Redd’s “inspiration,” she later told the crowd – revved up the tent in bold, churchy tones as he introduced his contemporary and urban ally.

“In a time of fret and dread, what we need is Dana Redd,” Booker cried.

Camden proud, Redd said she stayed in the city she loves “even when they were selling drugs down the street from where I live,” holding to the belief instilled in her by her parents that one day the city would come back.

Honored, she said, to be part of the renaissance, she promised to redouble efforts to provide safe havens for youth by expanding public partnerships with Rowan and Rutgers universities and labor unions.

“Children,” said Redd, “Should not have to fear being recruited into gangs simply as a matter of survival.”

Party sources have named labor leader Jenkins as a possible state Senate successor to Redd, who would relinquish her 5th District seat to serve as mayor, but Jenkins told PolitickerNJ.com it won’t happen.

“I will not be a candidate for Dana’s senate seat, and no, I’m not interested,” said the councilman.

“It’s Dana’s day,” said the younger Norcross when asked if he is interested in the senate seat. “Look, you guys have been saying I was the next congressman, and there’s Congressman Rob Andrews, right there. Now I’m the next senator. Come on.”

Norcross acknowledged that he moved into the 5th district over a year ago.

Also unclear is whether anyone will emerge as a serious alternative to Redd in a contest for mayor that will likely be jammed with candidates – nearly all of whom with the exception of Redd are unlikely to have significant political backing.

Whatever the fine point deductions of the stats, crime-ravaged Camden diehards here today like Monsignor Michael J. Doyle, pastor of Sacred Heart Parish, celebrated Redd’s entrance into the race as a blessing to a city besieged.

He remembers the year when Redd’s parents were killed at age 31 and 32, and he remembers the late Mother Teresa of Calcutta visiting Camden that same year and blessing Redd.

“Oh, Lord,” said Doyle, “lift forth your spirit on this young Camden resident I’ve known since she was eight years old. Bless anyone in Camden who has lifted a hammer, a voice, or a vote.” 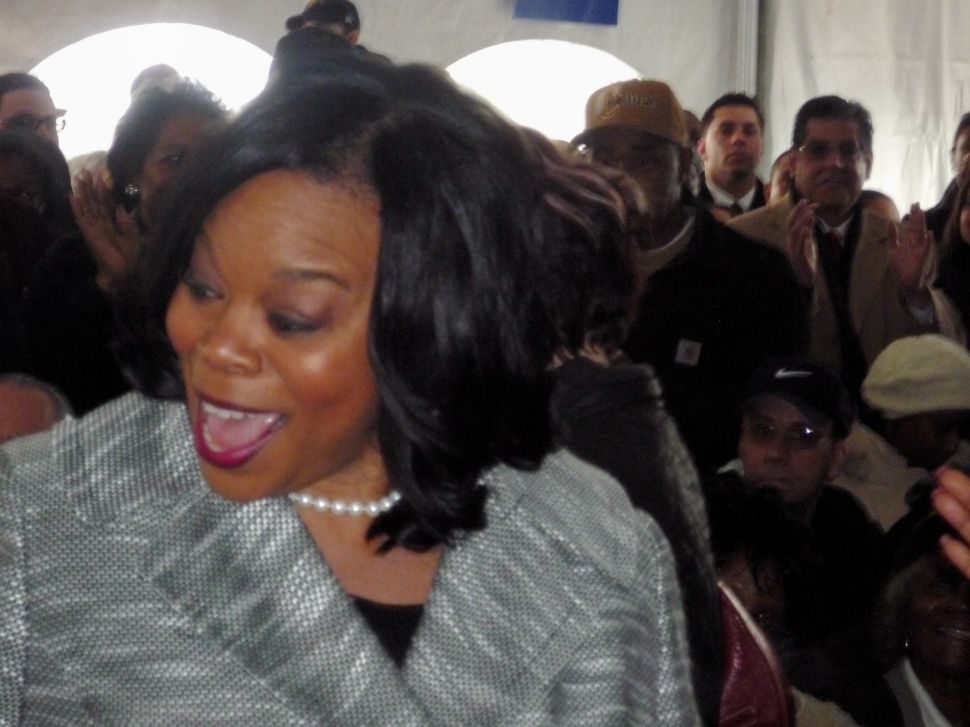