Fontana’s departure from the seat traditionally occupied by a Bridgewater resident opens up a possibility for Bridgewater Mayor Patricia Flannery, who’s well positioned to receive the Republican nomination. 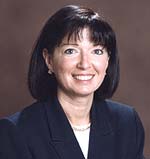