NEWARK – Television star Oprah Winfrey’s decision this month to drop a $500,000 gift on Steve Adubato’s North Ward Center effectively stamps out the fuse on a standoff between the North Ward Democratic leader and Winfrey confidante Mayor Cory Booker, in a resolution that underscores the political strengths of the two main combatants.

If Adubato, native Newarker and a grizzled guru now in his seventies, proved his relevance by waging a war in the streets and alleys he has known since childhood, Booker the Bergen County outsider turned Newark activist and statewide star, proved his manna from Heaven connections.

And the community won in the end, according to sources from both camps, as Adubato’s Blue Ribbon charter school, the Robert Treat Academy – whose students consistently rate higher math and science test scores than students in schools in all of urban New Jersey and all of Essex County – stands to get an unprecedented infusion of funds.

The contribution came with a back story.

For almost as long as Booker’s been in office, Adubato poked, prodded, cajoled, and chest-thumped in the face of the young star’s particular power, and now sources close to the North Ward leader say he intends to endorse the first term mayor for reelection next year.

It’s been an odd relationship.

Booker showed occasional irritation in the face of Adubato’s incessant throw-downs, blowing up at North Ward Councilman and Adubato ally Anibal Ramos once in council chambers, even dropping the “C” word on Ramos (rhymes with supped), and chafing at the presence of potential challenger Clifford Minor on a shared stage at a North Ward Center event.

But whether through some combination of meditation, restraint, concentration or simply internal knowledge of Adubato’s irrepressible kibitzing, Booker mostly traveled in a seeming ether of issues-centered calm, meeting with a smile the constant outpouring of local badmouthing concerning the mayor’s political acumen or lack thereof.

In short, he was getting schooled in a ground war with the old North War warrior. Even as he maintained his view that his only focus was crime reduction and the rest was Bloomfield Avenue bravado, Booker’s losses started piecemeal, then mounted, then snowballed.

And much of the trouble could be traced back to a phone line at the North Ward Center.

That race was arguably the one that sparked the downward spiral for the Booker empire, at least regarding its local political concerns, as an opportunistic Adubato and others saw that and started taking one bite after another out of the mayor’s weakening Newark kingdom.

The fight finally centered on control of the Central Ward, which is where Booker cut his teeth in the city as a young councilman.

At the height of his power, Mayor Sharpe James had controlled Newark’s three black wards: the West, the South and the Central. When he finally collapsed over the past three years under the weight of Booker’s advancing political forces and ultimately federal corruption charges, James left the ramparts of those three wards essentially unmanned, or at least leaderless.

With James gone, the Payne family promptly consolidated their power in the South, while Rice did the same in the West over the howls of Booker critics who said the mayor should have been able to finish off Rice – after all, he had beaten him in the mayor’s race.

Then Rice added to the perceived indignity when he snatched a freeholder seat away from Booker, who had tried to promote his political protégé from the South Ward, Terrance Bankston, only to watch the well-connected veteran senator propel his chief of staff, Rufus Johnson, ahead of the Newark mayor, of all people.

In the Central Ward, a revved up Adubato began to make incursions from his strengthened position in the North Ward.

It was a last-stand test for Booker, who had already shown his weakness in the South Ward by losing a county committee war to the Paynes and managed to blow a stealth campaign for county committee seats in the East Ward, which left local Democratic Party leader Joe Parlavecchio shaking his head in wonderment at the mayor’s clumsy and finally dismal on-the-ground efforts.

Sources close to an increasingly emboldened Adubato kept the word out there that the boss wanted to dump Assemblywoman Grace Spencer (D-Newark), Booker’s personal choice for the 29th district and an activist ally who’d gone to the wall for Booker in his mayoral campaigns.

In a show of independence, Spencer had apparently dismissed several of Adubato’s staff offerings in her first year in office, and Adubato figured if her boss, Booker, didn’t have her back, he would dismiss her, in yet another show of undeniable political force.

So for a while, Spencer went to Trenton everyday under an Adubato-generated cloud that she would be gone at the first opportunity, in the 2009 primary. The bosses were making moves – Adubato and Parlavecchio and the Paynes – to get her out of there and maybe even restore former Assemblyman Bill Payne (D-Newark) to his former seat of power.

They could do whatever they wanted. That was the attitude, for Spencer’s vulnerability went to the heart of the mayor’s office, where the street narrative remained the former Stanford football player’s inability to block and tackle in the roil of urban politics, and frankly his failure to protect his own.

Then Booker lost the Central Ward to Adubato when the boss’s right hand man, Dwight Brown, became the Democratic Party chairman with a victory over Booker deputy chief of staff Jermaine James.

“Pathetic,” was Adubato’s assessment of Booker’s losing efforts there before he crunched the phone down.

All the while, though, and in Booker’s considerable favor, it shouldn’t be forgotten that as Adubato continued to give the young mayor an old fashioned butt-kicking on Adubato’s terms, the mayor had jumped onboard the Obama bandwagon early and was running roughshod – in his own way – over the boss, who had felt the dual pressures of wife and daughters to back Sen. Hillary Clinton (D-N.Y.) only to have to endure – by slow degrees – the fatal collapse of Clinton’s presidential campaign.

While Booker lent his star power to the ever-growing – and ultimately winning – Obama movement, projecting inner sanctum confidence in the Democratic Party presidential candidate who gave Booker a from-the-stage stage shout-out in Jersey City, Adubato was grinding his teeth on the sidelines with every Clinton misstep.

But it finally still came back to Brick City for both men on Nov. 4th, and yet another Newark mano-a-mano, where Adubato adamantly fought the idea of Booker enjoying a hard-fought presidential victory by working with Rice and others to position Central Ward council candidate Charles Bell in the path of Booker’s local candidate, labor leader Eddie Osborne.

“Nov. 4th comes down to two men – Obama and Eddie Osborne,” he proclaimed.

But even as Obama romped, Adubato’s candidate insisted that the mayor go to bed on election night with the numbers 1-1 ingrained in his mind, as Bell defeated Osborne, handing Adubato yet another victory.

So that was the history leading up to the moment Booker, reveling in crime reduction, even more of a star than he was when Obama began his presidential campaign, and, in the opinion of most Newark insiders, one ring kiss away from acknowledging the older North Ward master’s political powers and removing themostinsistentobstacle to reelection, delighted as his friend Oprah Winfrey bestowed her gift on the K-8 Robert Treat Academy and apparently healed the fractured kingdom. 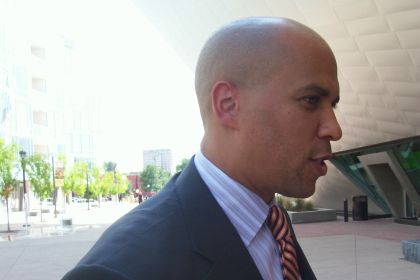