MOUNTAIN LAKES – They’ve seen other candidates in neighboring districts arrive at the brink of running and then back down with the awful idea of a bad economy turning even worse. For if there’s nobility in serving the public, there is also the catastrophic fear of accepting that service to the detriment of the more foundational forces of job and family.

What’s the good of circulating a glossy mailer advertising first-rate business credentials and a great looking family, when in fact the family sits at home with no food on the table because dad is out pouring the contents of their nest egg into his campaign, and a oncethriving but now unmanned business simultaneously goes belly up?

Yet as hard as it is to run, to pick up the phone and beg for money in a flat-lined economy, the four 25th District Republican primary candidates in pursuit of two seats– all attorneyswho fulfillat least some government contract work, some more than others- are going anyway, lousy economy be damned.

“We’re in the early stages of this campaign, and I’m in whether I raise $10 or $100,000,” said Randolph Councilman Gary Algeier, who intends to rely on writing columns and door-to-door campaigning probably more than fundraising.

Never good at raising money over the course of his 14-year career, Assemblyman Michael Patrick Carroll (R-Morris Township) every two years makes it happen with under $10,000, a hard scramble through the towns of his district to remind constituents he’s running again, minimal mail, a couple of events, his own unique style, and a pro-life, pro-gun, small government message that he owns in the 25th.

“I’m not exactly a shrinking violet,” said Carroll, a private practice lawyer who in addition serves as attorney for the Montville Planning Board. “Hopefully, my constituents know who I am. I’ve been out there criticizing Washington and Obama in my column and on TV. They know I have a general antipathy for big government. They know I have voted against all but one of the state budgets since I’ve held office, including Christie Whitman’s budgets. I’ve been out there at the forefront.

“This campaign is a little different than those of past years, because no one appears to be coming after me, but I have to make sure in an environment like this, not to disappear,” added Carroll, who like other elected officials in Morris County, can’t forget the shocking story of John Inglesino, a bankable star who lost reelection to the Freeholder Board three years ago after everyone figured he would walk back into office.

If the veteran Carroll has district-wide name ID, Algeier – who serves as part time public defender in Netcong in addition to his private practice legal work- possesses a conservative record as a local elected official in western Morris County, which he hopes counts for something with rank and file voters when he makes his case, particularly in small venue forums and face-to-face events.

The two other men in the race – both fulltime local government lawyers – are more likely to run full-fledged traditional campaigns in terms of mail, overall political ops, events and endorsements from elected officials who know Tony Bucco, Jr., either through his father or through junior’s legal work as municipal attorneyfor Roxbury and Netcong, and Morris County Freeholder Doug Cabana through his countywide presence over the course of a decade plus and lead dogcred on the issue of shared services. So far, Cabana and Tony Bucco have made an early statement that, like it or not, they’re going to depend in no small part on stepped-up fundraising to get their respective messages out there.

An unsuccessful candidate for the Assembly in 2003, Cabana hosted a breakfast buffet event last week with rising star senators Bill Baroni, Jennifer Beck and Sean Kean. So far, he’s raised about $15,000 for his campaign.

The municipal prosecutor knows it’s tough on people, especially now. A son of Irish-Americans from Paterson who moved to Boonton in 1959 because the mountain town was conveniently located on a public transit bus line, he keepsa framedcopy of a small dollar check he received early in his political career as a reminder of the sacrifices his supporters make for him.

“We’re having a fish and chips event next week,” said Cabana, who let the liquor flow at his kickoff event earlier this year at the Zeris Inn where much of the county’s GOP establishment flanked him at the podium.

Bucco, patriarch of a blended family of six children, is early finding fundraising for his own campaign to be a little on the order of a sustained nightmare, mitigated somewhat by his efforts to use his events as charity drives, and the goodwill of his supporters seated enthusiastically among balloons in a room dominated by the sign, “Bucco for Assembly.”

At his holiday time kickoff, supporters collected food for the homeless, and last night at his pasta dinner event at the Zeris Inn, guests contributed money to his campaign while also donating coats – again, for the homeless.

“They tell me I have to raise $100,000, and to do that while there are people struggling out there makes me think we need public financing of elections,” said Bucco. “To me, if you have a limited amount of money you’re able to spend, a candidate proves his worth in way by demonstrating wise use of his resources.”

Bucco stood in front of a room of about 100 people packed at tables and feeding on different variations of pasta, a mostly Roxbury and Netcong crowd that at one point in the evening included Carroll, taking about 20 minutes of contact time with constituents.

The young Bucco’s supporters, including his father, gave the candidate a standing ovation and he appeared embarrassed on top of the fundraising agony. Said Bucco at the podium amid the fanfare, “It pains me in these tough economic times to have to ask you for money.” 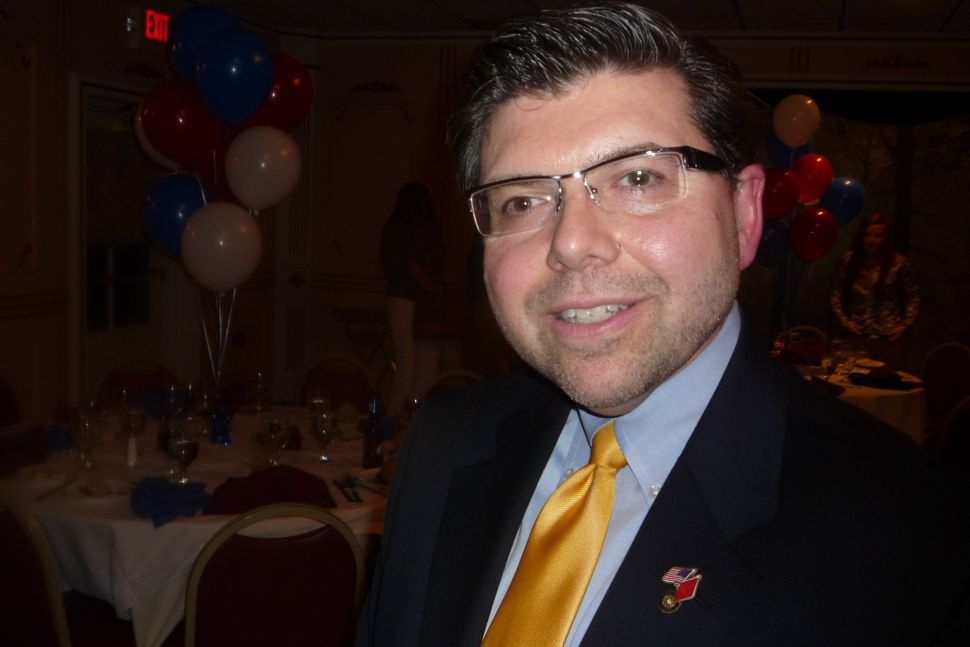