Gubernatorial candidate Christopher Christie dropped a major hint yesterday about his choice of a running mate if he wins the June primary: he said his Lieutenant Governor would chair the “New Jersey Partnership for Action,” leading an agency that will “create an effective infrastructure for economic growth.” If Christie intends to have his LG play a key role in the state’s economic recovery – not necessarily a bad idea – then it could mean that he does not intend to pick an LG candidate based on geographical, gender, racial, or ideological balance.

Could former Bergen County Executive William "Pat" Schuber come out of retirement to run for Lt. Governor? Schuber is a friend of the former U.S. Attorney and of his top advisor, William Palatucci. And while Schuber has been out of office for seven years — something that could be turned into a positive — he is likely to still have a following among independent voters in Bergen County that could be criticial to Christie's general election success.

Christie’s chief rival, Steven Lonegan, has let it be known that he will pick a running mate who matches his own ideology, without regard to any balancing of his ticket. 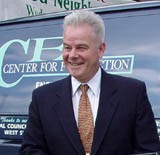