FRANKLIN – Kate Whitman, Republican Party municipal chair from Peapack-Gladstone and a veteran of last year's Republican Primary in the 7th Congressional District, is mulling a bid for Somerset County Freeholder, she told PolitickerNJ.com tonight at the annual Lincoln Day Dinner at the Imperia Banquet Hall.

But she hasn't yet discussed the issue with her husband, and she will do that before either talking to Chairman Dale Florio or deciding against another run.

"It would mean three screenings in three years," said Whitman, who had tried to land a freeholder seat in 2007 when Denise Coyle moved up to run successfully for the Assembly.

Whitmanlost that party committee battle only to bounce back a year later tocontend for the 7th Congressional District seat vacated by Mike Ferguson.

Meanwhile, as he stuck "Chris Christie" stickers on arriving guests tonight at the Imperia, County Chairman Floriosaid the only person who has communicated interest in screening for the freeholder seat is Bernards Councilman John Carpenter.

If he hasn't yet placed the phone call to Florio, Warren TownshipCommitteeman Victor Sordillo's name also surfaced as a potential screening candidate.

Another unlucky veteran of that 2007 screening process, Montgomery Committeeman Mark Caliguireis said to be mulling overa retry of his own.

As for Iraq War veteran Thomas Roughneen, yet one more former contender in the 7th District Congressional Primary, who ran an accelerated grassroots effort before going down in heavy defeat, "No, I don't think so," he chuckled as he pulled into the parking lot of the Imperia. "It's a rich man's game, and you can quote me on that.

"I can just imagine what my wife would do to me if I called her right now and told her I was running for office again," he added with a laugh. 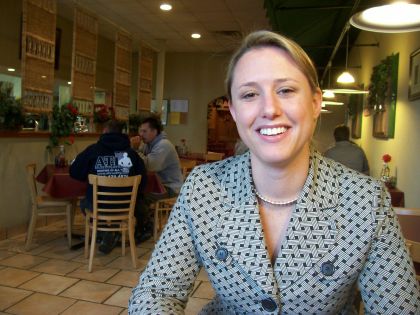