NORTH PLAINFIELD – It’s down to three men in the contest to succeed Somerset County Freeholder Director Rick Fontana, who sat in the audience at a local Republican Party screening here last night and observed the unfolding low-key drama.

On April 2nd, the full Somerset County Republican Committee will assess Bernards Committeeman John Carpenter, former prosecutor Tom Roughneen of Watchung, and Bridgewater Council President Pat Scaglione and decide who to back for the party nomination. Montgomery Township Committeeman Mark Caliguire dropped out of the race earlier this week.

“All I know is I’ll be dragging one of these guys around with me on the campaign trail,” said incumbent GOP Freeholder Deputy Director Jack Ciattarelli. “They’re three great guys.”

Sources say local tax-cutter and self-described “pragmatic environmentalist” Carpenter has the inside game with the party. Iraq War veteran Roughneen brings his experience as a government builder out of a ring binder in the Middle East. And Scaglione offers his credentials as a self-styled ahead-of the-curve councilman with a decade plus in local office.

“I first campaigned for an open space referendum when that wasn’t very popular, and it passed by just 50 votes,” said Scaglione, who noted that voters approved Bridgewater’s last open space question by an overwhelming majority.

After nearly pulling a Giuliani when his cellphone rang and he told the laughing audience, “my wife,” he also portrayed himself as a Somerset County diehard originally from North Plainfield who could draw votes on either side of Route 22.

“I am the one candidate who can bring a regional perspective,” Scaglione said.

Carpenter stirred the crowd when he bashed Gov. Jon Corzine, calling him “Governor Manana” owing to his deferred municipal pension payment offer, and when referring to his prosecutorial record, Roughneen said, “In Essex County, I’ve seen how government is not supposed to work.”

In Iraq, by contrast, Roughneen said he was inspired by the effort of Sunnis, Shias and Kurds to come together in the aftermath of Saddam Hussein to try to build an effective government in their ravaged country.

“Anyone who tells you otherwise doesn’t know what he’s talking about,” Roughneen said. 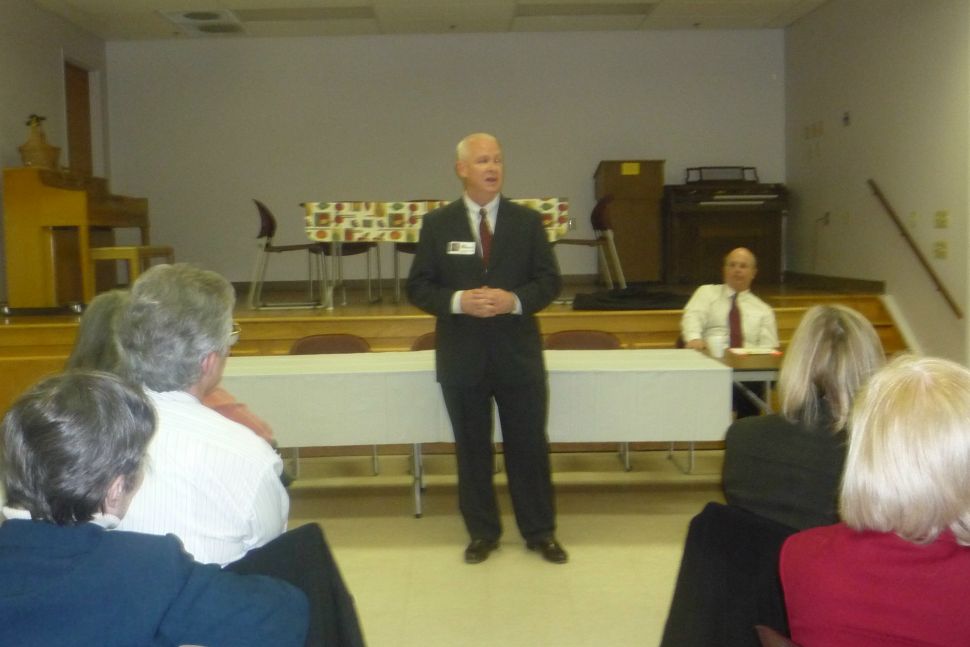