PASSAIC – Joe Kennedy wasn’t in the room but he likely would have marveled at the political challenge.

Quietly wrestling with the karma of what Jose Sandoval’s entry into his party means, Passaic County Democratic Party Chairman John Currie welcomed an opportunity Friday night to reflect on the larger dimensions of his party’s history as he stood beside U.S. Rep. Patrick J. Kennedy (D-R.I.).

“I remember when I learned of the death of President John F. Kennedy,” said Currie. “I was walking across the bridge over the falls in Paterson on my way to football practice.”

Still, there was no escaping the immediacy of local politics as the younger Kennedy stood next to Passaic Mayor Alex Blanco in the crowded living room of the parents of local Councilman Kenneth Lucianin.

The Lucianins annually host a fundraiser for the son of U.S. Sen. Edward Kennedy (D-Mass.), a Camelot offspring in his early forties who told the people here last night that he’s weathered his own substance abuse and bipolar demons to credibly undertake a fight to broaden healthcare coverage for those struggling with alcoholism and mental health issues.

Even as the young Kennedy spoke and welcomed praise from Assemblyman Thomas Giblin (D-Montclair) – “We can never begin to repay what the Kennedy family gave to our country,” – the battle of Passaic broiled.

“I was in the army, and I registered to become a Democrat because I was inspired by President Kennedy,” city supervisor Italian immigrant Vincent Capuana told PolitickerNJ.com last year as he and Blanco fought to become mayor in a special election to succeed jailed Mayor Sammy Rivera.

Blanco won with 3,859 votes, and now he and 3,656-vote-getter Capuana, who knows he has one shot left, will square off again in the May 12th contest for a full, four-year term. Of the other men who ran and lost in the mayor’s race last year, Capuana can claim Puerto Rican Councilman Joe Garcia as an ally, while Blanco has the backing of African American Carl Ellen.

“I like this young man Blanco because he wouldn’t know how to tell a lie – it’s just not in him,” Ellen said.

Then there’s Blanco’s fellow Dominican, real estate developer Sandoval, the city’s most famous current Republican who has exactly two days left in his party, according to his former campaign spokesperson Linda Ellerbe.

Despite his Kennedy-era Democratic Party credentials, Capuana remains on the outside of the organization that Currie operates here and has operated going back to the days when Republicans controlled Passaic and the chairman was just an erstwhile outsider leading a minority party.

So when Sandoval’s handlers issued a release Thursday announcing a Monday press conference featuring Currie and Sandoval, ostensibly for the chairman to welcome the three-time Republican loser (Assembly, Congress, Mayor) into the arms of his new party, some of Blanco’s supporters bristled.

The difficulty for Currie and the potential trouble for Blanco is that Sandoval apparently intends to back Capuana for mayor over Blanco, the man who has Currie’s support, the support of Assemblyman Gary Schaer (D-Passaic) and presumably every name Democrat in these parts all the way up to U.S. Sen. Robert Menendez (D-Hoboken), who attended Blanco’s swearing-in ceremony.

“You’ll have to ask Mr. Sandoval about that,” said Currie, who said he’s happy to have Sandoval in the party while unable to control who he backs in the mayor’s race.

According to Passaic sources, Sandoval had pushed hard for at least a freeholder seat in this cycle, and Currie couldn’t – or wouldn’t – provide him with the opportunity to snare one. If perhaps he has sustained the worst series of beatings on his way to becoming a Democrat, it’s not as though Sandoval is the first Passaic Republican to make the transition, as both Schaer and Blanco used to belong to the GOP.

Yet sources say Currie questions the wisdom of building him up too quickly, if at all. Notwithstanding his 2,846-vote finish in the mayoral election, Sandoval didn’t pose a grave danger in his Assembly or Congressional races. Certainly he wasn’t formidable enough for the chairman to now warrant passing over longstanding Democrats who have stood in line for Currie’s support.

If a handful of days remain before the April 6th filing deadline in which Sandoval could launch a surprise off the line primary campaign against Schaer and Assemblyman Fred Scalera (D-Nutley), evidently Currie doesn’t nurse a fear that Sandoval can turn this coming mayoral election and enable Capuana to beat Blanco, just as Sandoval’s tacit threat in negotiations to back Capuana if he couldn’t land a freeholder seat created no horror in Camp Blanco. “Ah, Sandoval,” was all the mayor would say about his former foe, the man he helped relegate to third place last November after joining forces with Schaer.

This election is no lock for Blanco.

Capuana’s forces are hopeful Garcia’s Puerto Rican votes and Sandoval’s Dominican votes transfer to their guy, splinter Blanco apart and add substantially to their base of non-Jewish whites and African Americans.

Even as his team operates happily under the proposition that endorsementsdon't historically transfer votes in Passaic politics – with the unimpeachable exception of a single population -Blanco has worked hard to build relations with the black community these last few months, welcoming as an ally longtime City Hall gadfly Jeffrey Dye and, of course, happy to be tight with Ellen. The Lucianin alliance keeps his non-Jewish white cred alive and, significantly, Schaer’s Orthodox Jewish community will field a base 2,000 voters on any given Election Day and remains the only completely reliable voting bloc in the city.

BothCapuana and Blancowill run to be the face for all of Passaic.

But the fact that Garcia, a Puerto Rican, and apparently Sandoval, a Dominican, will back Capuana means Blanco must – just in case – credibly argue that he’s capable of unifying Latinos – specifically, that he’s capable of reaching out to Puerto Ricans, the city’s largest group of voting Latinos – perhaps his most personal challenge as a politician at this stage of his young career.

In this regard, he is not too different from the Kennedy of 1947. In the face of an electorate attune to social custom at every turn and skeptical of any misstep should he not project unity for all Hispanics, Blanco in Passaic must be the Latino the same way Kennedy in the 11th District had to be the Irishman.

It was a leap for a lot of the old and streetwise Irish voters at mid 20th Century, who only went along because Kennedy’s father prevailed on John Curley to vacatehis congressionalseat.

In this case Capuana won’t step aside; and Blanco won’t have Joe Kennedy, but he does have Schaer, Currie, Lucianin, Paterson Mayor Jose "Joey" Torres, and some other friends in a powerful Democratic Party here, who’ve put their time in longer than Sandoval. 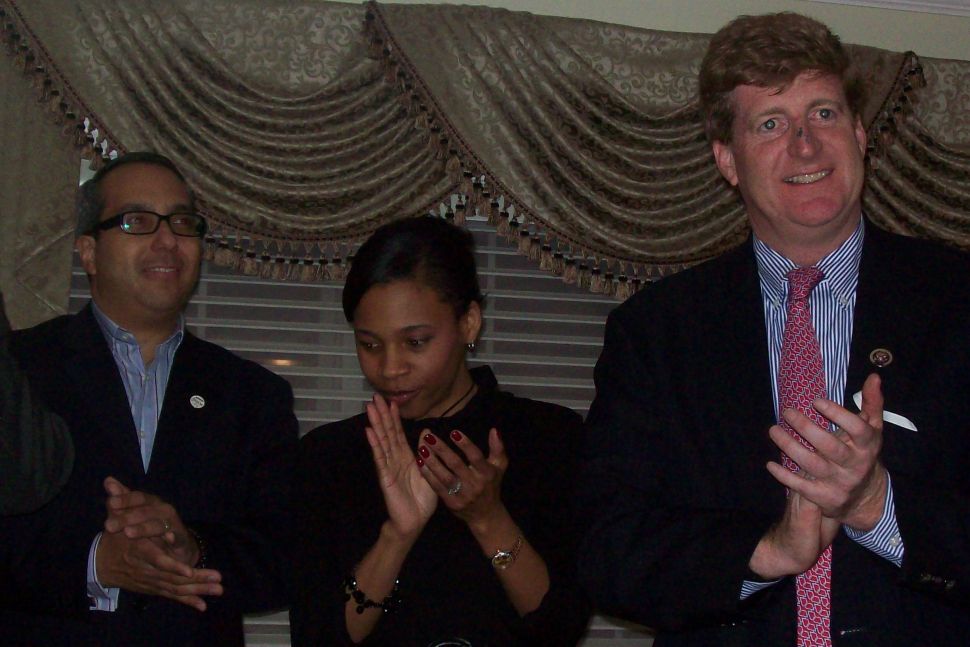