“Pete Cammarano will bring honesty and efficiency to government,” said the tousle-haired Kennedy, who repeated the signature argument of Cammarano’s mayoral campaign, which is that unlike his opponents – Councilwoman Dawn Zimmer and Councilwoman Beth Mason – Cammarano rejected a state takeover of Hoboken’s budget, which resulted in a 47% tax hike.

“He’s running with a team of fresh faces, and they’re going to change the way government works,” added Kennedy, the son of environmental lawyer Robert Kennedy II, and the grandson of Sen. Robert Kennedy (D-New York).

To political cynics in the room alert to any defects in the young Kennedy heir, his prepared script must have contained the resonance of an American trying to affect the manner of an Irish Shakespearean actor auditioning for a TV sitcom set in Jersey.

But in this River Street venue jammed with Democrats and familiar statewide faces still apparently instinctively eager for some suggestion of Camelot glam, there were the requisite gasps.

“You could close your eyes, open them, and think you were looking at Bobby Kennedy,” said at least one otherwise hardened party insider, loud enough for young Bobby to hear as he mixed. To see the scion’s less than excited reaction, one gets the sense he hears similar exclamations frequently, as attendant scribblers attempt to monitor his every move in comparison to past generations of his brood.

Brought in by pal Councilman Kenneth Lucianin of Passaic and fundraiser John Graham to boost Cammarano, Kennedy, a 23-year old Brown University grad who lives in Brooklyn and edits a website devoted to truth in reporting, in his turn at the microphone read pro-Cammarano remarks that carried more than the vague echo of what Bloomfield Councilwoman Janice Maly had intoned moments earlier.

The gist: Cammarano warned about the state takeover, predicting disaster for the city if councilmembers went that way, which, over his “no” vote, they did – and it did.

Kennedydelivered the words in a somewhat crowd-averse, eyes-averted style more reminiscent of Caroline Kennedy’s press episodes from earlier this year than vintage BFK. An environmentalist like his father who's involved in remidiation work in Sea Girt, according to Lucianin, his longer term professional passion is the film industry – not politics.

A pumped Cammarano – delighted by the turnout – embraced Kennedy and stood at the head of the bar with his running mates: Union City cop Angel Alicea, businessman Michael Novak and Board of Ed Prez Frances Rhodes-Kearns.

Cognizant of the dollars spread around the room at this $75-a-head open bar fundraiser, Cammarano downplayed his opponents as a pair of politically ham-handed millionaires.

“The thing about self-financed candidates is they do not win,” he said, before paying his respects to the governor as the exception while backhanding Republicans. 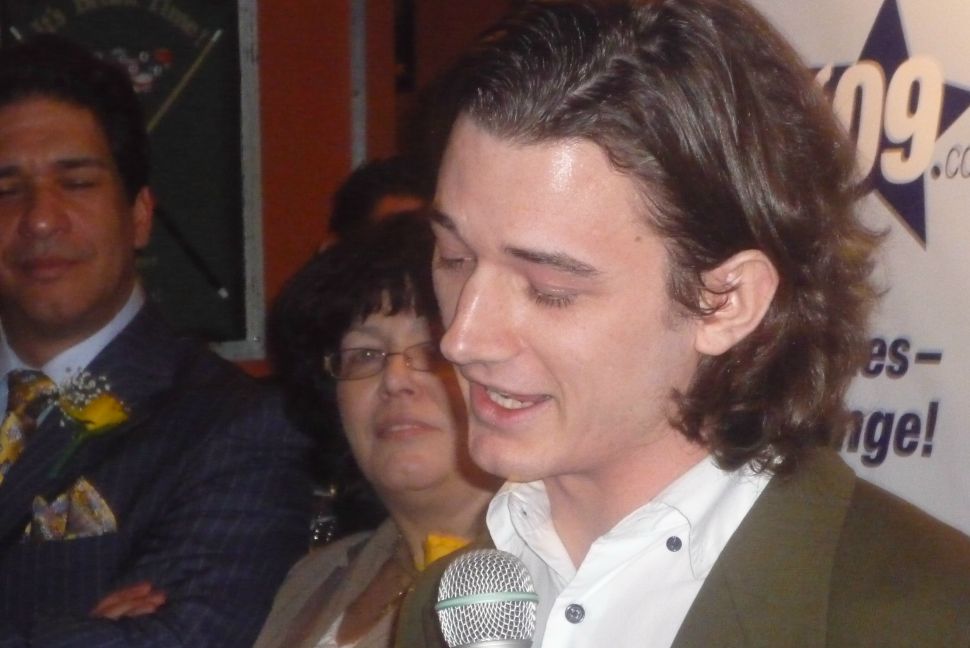