BERNARDS – The hazards of a candidate from some occupation other than government thrust into the upper echelons of public life might include a lack of media savvy, institutional knowledge or political instincts.

Of course, it would be highly preferable for that candidate for lieutenant governor to be a woman.

“I think if Chris is the Republican nominee, a woman business executive – and no, I don’t have any names at the moment, no one in mind, but I just think that would create a very strong Republican ticket,” said Florio, a 16-year veteran county chairman.

“Here you have Chris Christie with his law enforcement background, and you balance that with a woman who has executive experience in business,” Florio said. “I think it could be a compelling ticket.”

State Sen. Jennifer Beck (R-Red Bank) and Bergen County Clerk Kathe Donovan are two potential GOP candidates for lieutenant governor, either of whom would be a good choice, in Florio’s view.

But in addition to their names the GOP chair would like the party – and specifically Christie, if Christie becomes the nominee – to consider going beyond strictly the New Jersey political sphere – to the business world.

Florio thought vice presidential candidate Sarah Palin did a decent job of energizing the Republican base nationwide last year, and credits her with enhancing the competitiveness of the presidential showdown between Barack Obama and John McCain.

However, he would have preferred former Hewlitt-Packard chief Carly Fiorina, former eBay heavy Meg Whitman, or even Bain Capital exec and former Massachusetts Gov. Mitt Romney on that ticket with McCain – to build the war hero up where he was perceived to be weakest: on fiscal and economic matters. 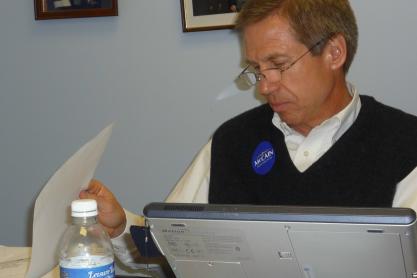