Bergen County freeholder candidate Chris Calabrese, who was considered a favorite to win the Bergen County Republican Organization's (BCRO) endorsement, has suddenly found his candidacy in jeopardy over a flyer he distributed to county committee members.

Calabrese lost his freeholder race last year by a relatively narrow margin, but he was the top vote getter of the three Republican candidates for those positions. He highlighted that fact in the flyer by comparing his vote totals to those of the party's other freeholder candidates over several past election cycles.

The controversy over the flyer centers on its lack of context — that it failed to take into account the much higher turnout in 2008 than in years when the other candidates ran.

Calabrese's critics charge that it's unfair to compare off-year elections like in 2007 to a historic presidential year, or even to compare 2008 to years when there was less interest in the presidential race.

Moreover, several of the candidates mentioned in the flyer –Dick Mola, Lisa Randall, Louis Tedesco Jr. and Paul Callan- won their races despite having totals that were lower than Calabrese's.

Fair Lawn Councilman Edward Trawinski, who was one of the former freeholder candidates mentioned in the piece, is actively working to win the party's endorsement for rivals John Driscoll, who ran unsuccessfully for assembly in District 38 last year, and Robert Harmensen, a councilman from Mahwah.

Trawinski, however, said that the flyer was only part of his problem with Calabrese's campaign.

"It was a combination of things. It was the flyer," he said, adding that it gave a "distorted picture."

"I'm pretty thick skinned and it doesn't bother me in and of itself, but there were also comments that came back to me that Chris made attacking Rob Hermansen and John Driscoll for being fathers of children."

Trawinski said that Calabrese told county committee members that he had more time and energy to commit to campaigning because, unlike his rivals, he did not have a family.

"I do want to make one thing clear: I will support and actively work for and help whoever the candidates are that the convention picks," he said. "But having a choice, I want to stand up for candidates who run on high principles and don't bash fellow Republicans."

Calabrese's allies, however, argue that the 33-year-old businessman does have the best shot at beating a Democrat, even if the flyer was not a smart move.

Republican consultant Thom Ammirato, who ran the BCRO's freeholder campaigns last year, worried that the intra-party squabble – notoriously common in the beleaguered party — was threatening to snatch defeat from the jaws of victory.

"You have an experienced county candidate who ran a very good campaign last year, raised a significant amount of money, has mastery of the issues, already has name ID, was endorsed by The Record, won more than 40 towns in Bergen – including South Bergen — and captured 48 percent of the vote when the top of the ticket lost significantly," he said.

"I think it comes down to basic marketing and common sense. If a company has invested $250,000 in a marketing campaign that was highly successful in a number of areas, would you think that company was smart to pull that product and introduce a totally new one that has no real positive track record?" 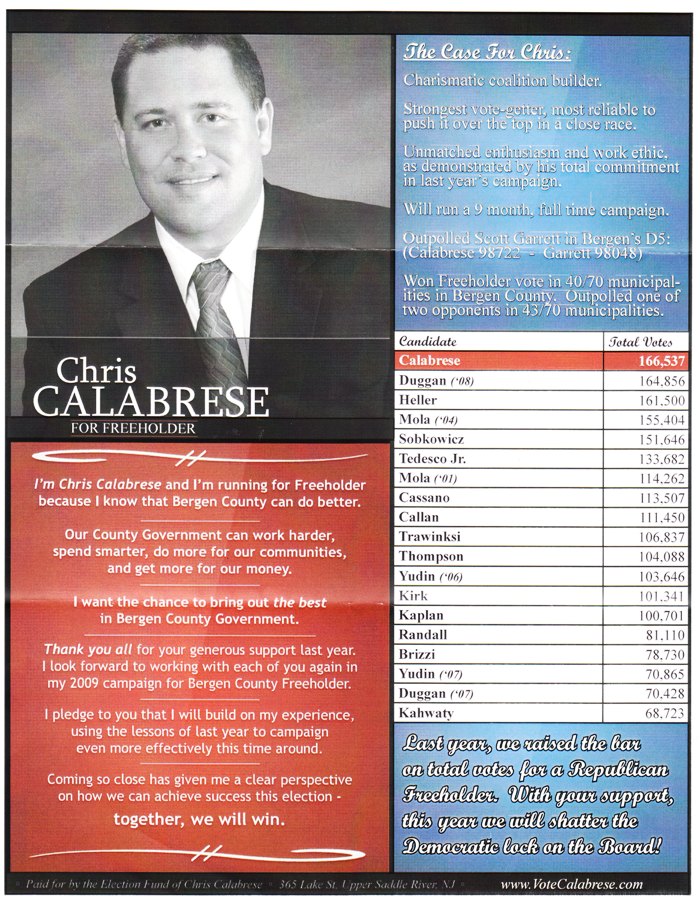