WEST ORANGE – Steve Lonegan left the Friendly Sons of St. Patrick dinner Tuesday night at the Mayfair in West Orange knowing the narrative gathering out there among the insiders – that he’s finished against Chris Christie, who keeps racking organizationalsupport in the lead up to the June Republican Primary.

But the movement conservative goes back to his fundamental reading of a gubernatorial contest between Trenton insiders embodied by Christie’s campaign versus new leadership embodied by him, maybe a rationalization to those who see the former U.S. Attorney as a legitimate Republican star and Lonegan as a bona fide long shot.

To Lonegan it’s not the campaign he would have conceived but the one he has now with two and a half months to go, and which he insists he will win.

“We’re working hard on the ground raising money we’re going non-stop,” he told PolitickerNJ.com. “I’m not competing in these things, these screenings and conventions. I’m not spending money on them. This is about message. Party lines are overrated. My strategy has been to set the agenda with my flat tax proposal, while the Christie camp has done nothing but speak in vague generalities. This message disparity will become more apparent.”

To date, the problem for Lonegan has been the Christie campaign’s relentless evasive action, especially frustrating for a Lonegan campaign that figured it could outscrap Christie if it could just turn the primary into a dogfight.

But so far there is no dogfight – just Christie in ascendency among organization Republicans.

“They are dodging me every step of the way,” Lonegan said of his chief rival’s campaign. “They’ll schedule and then cancel. They skipped Egg Harbor. They skipped Piscataway. Christie bailed on the Leadership Institute at Rutgers on Wednesday and rescheduled for Thursday morning. My people called and said we want to be there, too. As for a Somerset Republican event tomorrow (Wednesday) in Bernards, Christie’s people called and said he would be there to make a statement only.

Christie spokesman Bill Stepien says the campaign never committed to the Egg Harbor and Piscataway events, citing scheduling conflicts; and accepted preset formats in the cases of the other events.

The two Irish-Italian Republican politicians squared off in at least onehigher profile debate last month with NJNchief political correspondent Michael Aron,yet Lonegan wants more debate. “This guy will not go head-to-head with me,” he said. “It’s obvious their strategy is to raise his name ID in the primary.”

The former mayor of Bogota said he trusts Republican voters will appreciate the specificity of his ideas. In contrast to Christie’s comments that his job as a candidate is to critique Gov. Jon Corzine’s budget rather than present his own version, Lonegan said he has identified 20% in cuts (including state worker layoffs and the downsizing of state departments from 16 to ten) to get the budget down to $25 billion.

“They need to go out into the real world and get real jobs,” Lonegan said of those state workers he would ax from the state payroll. “They need to give up their jobs as party hacks and become productive members of society.

“There is a lot of similarity between the Christie and Corzine camps,” Lonegan added. “They don’t have a real handle on how government policies impact the economy. In the last eight years we have seen Paid Family Leave, an increase in taxes on small business, the millionaire’s tax, card check – a multitude of jobs killing initiatives.”

The candidate said he heard the governor’s comments Tuesday suggesting he would “rethink” eliminating the property tax deduction for taxpayers earning over $75,000, and Lonegan said rather than increase the tax on the high end of income earners to compensate, Corzine needs to cut real spending.

“When you’re talking about tacing up to ten percent on income – you hit that number ten and that is going to be devastating to people,” said Lonegan. “You’re going to see an accelerated exodus of high-income earners out of the state.”

If he can’t find the forum to engage Christie the way he would want, he intends at least to keep organizing. If it must be among those who count themselves farthest from the insiders, so be it – he figures he’s coming at it from the outside anyway.

Ideal, no, but “we intend to win,” Lonegan said. “There really is no other option.” 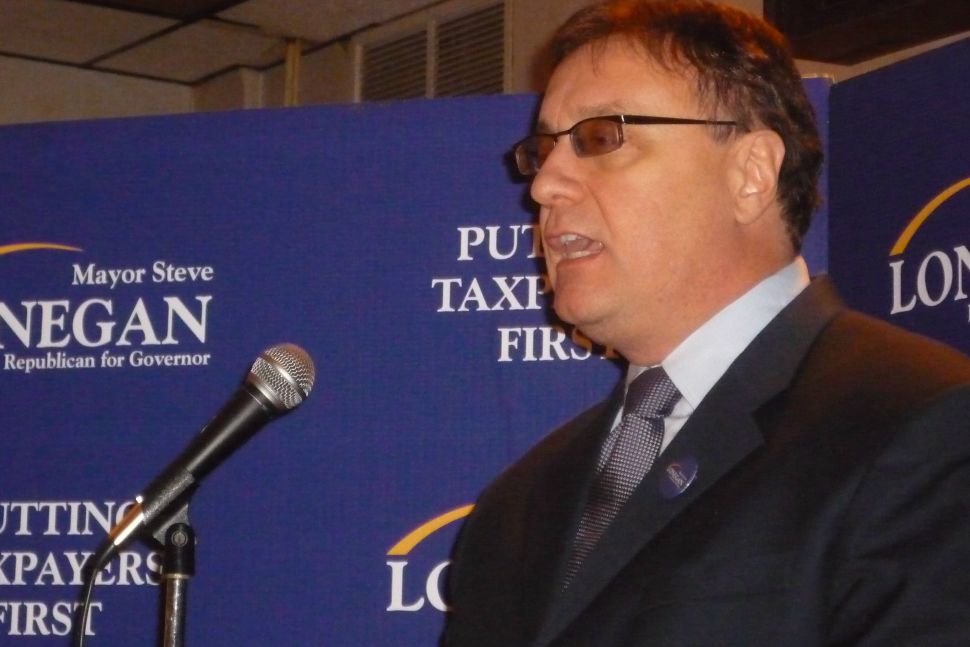