NORTH PLAINFIELD – The Republican candidates for governor not named Chris Christie or Brian D. Levine stood in front of a small crowd of North Plainfield Republicans Tuesday night and took two questions from the audience at the direction of municipal GOP chair Richard Blundin.

Campaign literature bearing the face of a grizzly bear and paying homage to Sarah Palin meant that South Brunswick inventor David Brown could not have been far to have distributed those materials, and there he was alongside former Bogota Mayor Steve Lonegan and Assemblyman Richard Merkt (R-Mendham).

Lonegan and Merkt each emphasized what they see as the problem of illegal immigration in New Jersey, and Brown liked what he heard from both of them.

“There are 300,000 residents in this state who are unemployed, and 500,000 illegals taking at least 300,000 jobs,” said Merkt. “It is a significant problem that people who are not legally allowed to be here are allowed to be here.”

Lonegan amplified that in his answer to a question about the State Unemployment Trust Fund.

“It was raided to fund Charity Care, 90% of which goes to illegal aliens,” said Lonegan. “We need to stop funding Charity Care through the Unemployment Trust Fund.”

The conservative candidates reaffirmed their commitment to abolishing the Council on Affordable Housing (COAH) to which Brown added, “I came up with a very unique slogan – ‘100 Great New Ideas for New Jersey’ – and Steve and Rick are doing that with COAH.”

Levine, the mayor of Franklin Township and another GOP gubernatorial candidate, presided at a council meeting in his hometown Tuesday evening where residents were expected to engage on the town tax assessment.

So he didn’t make it either. 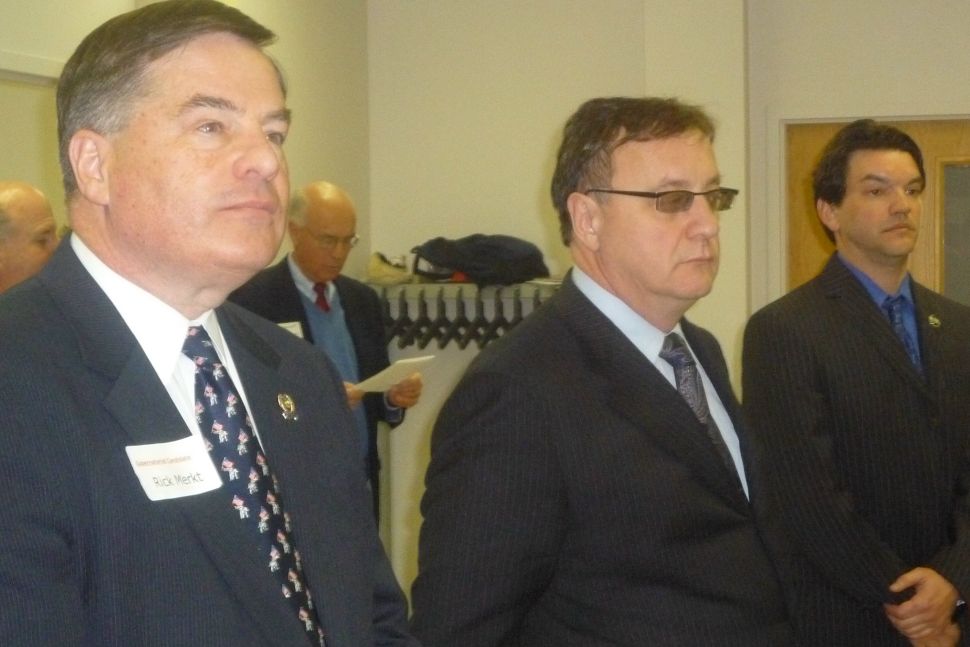