PERTH AMBOY – The rivers run into each other there and disgorge urb and burb remnants alike into the bay.

“Tell your friends not to be embarrassed if you can’t pay your mortgage,” she says, in English and Spanish. “If you wait two or three months, the situation will only be much worse.”

Her foreclosure information session runs nearly two hours and during that time few – if any – leave the standing-room-only auditorium.

“You have one of the more courageous individuals I have seen in public office,” Sires tells the crowd after embracing Diaz and recognizing her particular budget battles and her ongoing struggle to find tax revenues in the Abbott District city.

“I was mayor for 12 years. I had to lay off people, and that’s not easy. Some of the people I laid off were people I went to school with,” says the congressman.

A front-page Star-Ledger headline out there in sidewalk vending machines in this six ward city of 50,000 concerns the public trials of Assemblyman Joe Vas (D-Perth Amboy), the man Diaz routed last year in a grassroots campaign to become mayor after her taxes under Vas went up over 100% in two years.

But down by the city’s refurbished waterfront, a lifelong Perth Amboy guy in the Barge restaurant on the other side of the old Naval yard says he doesn’t like the timing of the Vas indictment two weeks in front of a special county convention.

“It’s called an election year and the mayor of South Amboy decided he wants to be an assemblyman,” the old-timer says of Mayor John T. O’Leary’s Democratic Party primary challenge of Vas with some party muscle behind him. “Come on. They’re trying to take pepper out of bird s**t with this indictment. There are perks when you’re mayor. I just don’t see anything there on Vas that should warrant this kind of action other than politics.”

“Every time I called his office, he helped,” says the man’s wife. “Look at this place. The waterfront. It’s beautiful. You couldn’t walk here before Joe Vas.”

“Best mayor we ever had,” says her husband as he throws on his coat.

Vas is accused of conspiring to steal about $5,000 in funds of Perth Amboy city funds to pay for personal purchases and expenses and of rigging a public lottery so his personal driver could buy a two-family home through a local affordable housing program.

Signaling their willingness to continue to cooperate with the Attorney General, the Diaz administration releases a terse reaction statement to the initial Vas news on Wednesday and over the coming days sticks to the public schedule without elaboration.

On Saturday evening, March 14th, the local Republican Club will honor the mayor at an event where Chris Christie, Republican frontrunner for governor and a former crime-busting U.S. Attorney, plans to attend the cocktail hour.

“She respects Christie for his work as U.S. Attorney, but by no means is she a supporter of his in the gubernatorial campaign,” says a source close to Diaz. “She’s with (Democratic Gov. Jon) Corzine. The invitation was offered last year.”

But if there is a political timing factor with the state AG’s officeeliminating Vas now so the Democratic Party can ensure he’s not the nominee and an insistent 19th District headline headache in a gubernatorial general election in which Corzine is vulnerable – it worked.

Middlesex County Democratic Organization Chairman Joe Spicuzzo holds a press conference at party HQ Friday morning and tells a group of reporters Vas won’t continue his bid for reelection. If they don’t believe him, Spicuzzo hands over the brief, typed March 12th letter from Vas himself to prove the famously stubborn former Perth Amboy mayor is indeed ending his run.

“In light of the events of the past few days and the unnecessary distraction which may result to the Democratic Party,” Vas wrote, “I regret very much to advise you that I wish to withdraw as a candidate for the democratic nomination for the Assembly in the 19th Legislative District. Thank you for your continued support.”

As for the assemblyman leaving office before his term ends at the end of this year, “That’s up to him,” says Spicuzzo as reporters face him at a round table in the back of a Metuchen office park. “The governor and speaker have called on him to resign. I would think any time there’s a feeling of corruption out there, it hurts. It hurts the party. It would be better for him to resign now, but that’s up to him and his lawyer.”

Spicuzzo denies a party fix for O’Leary to avoid the perils of the Democratic Party offering a sullied Assembly candidate in the event Vas had secured the nomination, but he won’t speculate on the AG’s timing.

“The contest between O’Leary and Vas was a little closer, depending on who you talked to,” says Spicuzzo. “I think Vas made a lot of enemies over the years. He said some things I didn’t like. People say a lot of things.”

Vas’s street allies blame powerful party members who don’t want Vas’s name on the November ticket, some of whom are only too eager to exact some revenge for past political clashes. But Jim Devine, who worked as a Diaz campaign consultant last year, says Spicuzzo’s right about Vas making enemies – at all levels.

“When I ran polls in Perth Amboy, a third liked Vas but just didn’t want him to be mayor anymore, a third liked him and wanted him to continue as mayor, and a third thought he was scum,” Devine says. “That third of people who didn’t like Vas locally was committed. I mean, this is a mayor who canceled the Puerto Rican day parade to settle a score with a political opponent who ran the parade. That was not a popular decision with the Puerto Rican community.

“Vas for years had a stellar record of stable taxes from solid management and shrewd budgeting but one-shot revenue deals like selling the watershed to the county for an infusion of $11 million one year, caught up to him after a while, and after 2006, taxpayers were looking at an $8 million increase,” adds Devine.

After suffering his 39% to 61% loss to Diaz, Vas re-secured the chairmanship of the Perth Amboy Democratic Party in what some observers believed was the beginning of a comeback and prep work for his run for the Assembly again.

Spicuzzo tells the press he advised Vas to resign as local party chair.

“The decisions Joe Vas makes now will impact his future political career – if he has a career,” says Spicuzzo. “I wouldn’t be surprised – if he’s not convicted – that he puts his name in again. The fact that we will be losing a minority member in that seat is a concern for me. But nobody from the Latino community has shown an interest in that seat right now.”

In the packed parish center of Our Lady of Fatima, Sires gives a nod to the larger framework of a crisis.

“I don’t have to tell you how difficult things are,” Sires tells the overflow crowd. “630,000 people in this country lost their jobs last month. Wall Street meltdown. Credit crunch. …If you think I like to spend billions to bail out the banks, you’ve got another thing coming.”

A man rises and in Spanish starts cross-examining Sires about why the U.S. government continues to ship jobs overseas. He’s animated, and the crowd starts murmuring. A cop inches up behind the man as Sires tries to untangle the question. The congressman waves him off, it’s ok.

When Diaz stands at the microphone, she goes local.

“I am very proud of my town,” she says. “My town is your town. What you’re paying in taxes goes to salaries, insurance, safety and security. That’s why we’re here today. We are here to help you, and I also need you to help me.”

After the event, she’s mobbed.

If there’s any thought of Vas, one can’t tell.In an adjoining packedchamber, a priest, not a politician, stands before another crowd, and leads a common prayer.

In a Latino bakery on Smith Street, a visitor scraping the last crumbs of cherry cobbler off a paper plate and washing it down with coffee catches the eye of a young woman behind the counter. When they make eye contact she gives him a look like, “Don’t even think about it, pal.”

So when he asks the question, it catches her off guard.

“What do you think of Joe Vas?”

There’s a newspaper vending machine on the sidewalk in front of the store filled with papers with a mug shot of the former mayor of 18 years on the front page beneath the hard luck headline and even with the mention of the title he held and some of the history, the woman shakes her head blankly as salsa rhythms flood the store. 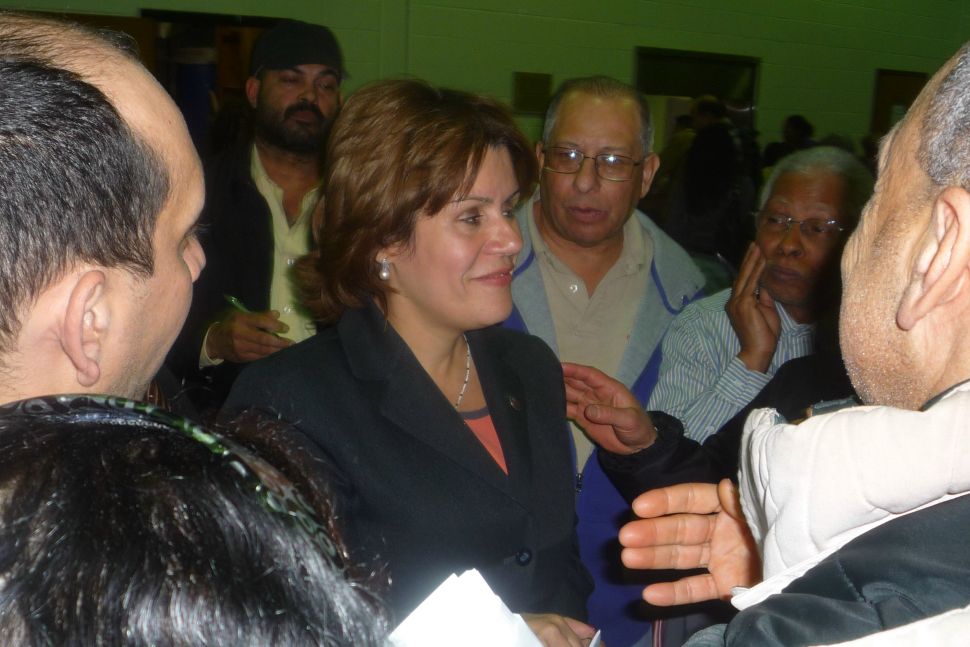