Assemblyman John Rooney (R-Northvale), the longest serving member of the state assembly, will not seek another term and has endorsed Washington Township Councilman Bob Schroeder to take his place.

Rooney, who has served in the lower house since 1983 and has been mulling retirement for over a year, made his decision official in a letter to fellow Bergen County Republicans dated March 2.

“I would like to thank you for all your past support in 14 election and re-election campaigns during my 26 years as your Assemblyman in District 39. It was truly appreciated,” he wrote. “This letter is to inform that I am withdrawing my name as a candidate for this office in the upcoming NERO convention.”

Rooney went on to write that Schroeder, a former Republican gubernatorial primary candidate who owns a military contracting business, has the support to fend off Democrats if they make another major play for the district, as they did in 2007.

“In the last election the Democrats spent three million dollars while we struggled to raise eight hundred thousand. Thankfully, Senator Cardinale raised six hundred thousand of that budget. However, since Gerry won a four year term, this time he is not on the ticket and the Democrats will likely be well financed again with Corzine’s deep pockets,” wrote Rooney. “To combat the Democrats this year we need an energetic and dedicated candidate who has always supported the Republican Party. The best example of this is Bob Schroeder.”

Rooney insisted that he is not retiring from politics and left the possibility of runs for other offices open.

“While the future is uncertain, let me assure you that I am not retiring from politics but have not yet decided whether to pursue local, county or state office options in the future,” he wrote.

Democrats are not expected to pour serious resources into a District 39 rematch, although attorney John Shahdanian and labor leader Michael McCarthy, who are the only candidates so far to seek the Democrats' endorsement to run in the district, have promised to run competitive campaigns. 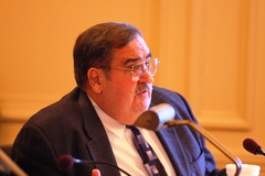