MANVILLE – If you have a score to settle in this old factory town – and this tradition goes back a while now but maybe it still applies – you meet the other guy under the tower, and it looked like some members of the Somerset County Democratic Committee planned on just such an encounter with Gov. Jon Corzine this morning at the VFW Hall where the tower stands on the other side of the train tracks.

The back-story buildup to the committee’s unanimous endorsement of Corzine came with an infusion of drama as party members here nursed some hurt feelings over the administration’s disinterest in interviewing their recommendation for a county prosecutor to succeed retiring veteran Wayne Forrest.

That left a dedicated contingent here feeling disrespected and wanting to make a statement, particularly if Corzine was going to be a no-show at the convention. Still others blamed the State Committee for not playing a more aggressive role in coordinating Assemblywoman Linda Stender’s (D-Fanwood) congressional campaign, and the tendency among machine Democrats in other counties to see Somerset as a write-off.

But the governor arrived here this morning in charged-up form, and that seemed to remove an edge of angst and diminish a desire to nominate, say, former Manville Mayor Angelo Corradino for governor, or some other local diehard who’s had to eat a lifetime of agony countywide in this Republican Party stronghold.

When no other than Wilson himself strode to the front of the room to nominate Corzine, there were some grins in the big room, because that’s when people knew the flare-up was over and Committee Chairwoman Peg Schaffer had made her point: We’ll be with you, governor, even unanimously – just don’t forget about us.

“There are today more registered Democrats than Republicans in Somerset County,” Wilson reminded the crowd.

After Joan Pritchard seconded Wilson’s motion, Schaffer seemed determined to publicly test the solid ground as she couldn’t resist a playful tone in asking the committee if there were any other nominations for governor.

A voice screamed to pass the motion and several others fairly fell over themselves seconding that motion and when Schaffer called for those in favor to say “Aye,” the “ayes” were especially strong, and the “nays” nil and so the Somerset Democrats – which don’t yet (and maybe won’t) have a full slate to compete against Assemblyman Pete Biondi (R-Hillsborough) and Assemblywoman Denise Coyle (R-Bernards) – had weathered their Corzine drama – at least for the moment.

Montgomery Mayor Cecilia Birge and North Plainfield Councilman Doug Singleterry will run for the Democrats against incumbent Freeholder Deputy Director Jack Ciaterrelli and a GOP running mate to be determined next week.

Now the governor went to the front of the room.

“We’re going to kick Christie’s ass all over the State of New Jersey!” Cryan had screamed moments earlier, jolting committee members upright in their chairs after several less than on-the-barricade performances. “I’m damned proud Somerset County went for Barack Obama in November and we turned the page on this idiot (George W. Bush) after eight and a half years.”

“I’m in a fighting mode,” roared the governor. “I’m thrilled to be in this VFW hall. We’ve done more for veterans – helping them with post traumatic stress disorder, establishing the World War II Memorial in Trenton. Making sure you recognize the people who actually protect you – that’s an American value.”

He foresook the podium, preferring to be an ambulatory front row presence for the roundtable contingent of committee members, some of whom held up cellphone cameras to capture scrapbook moments with the governor.

“Obama won by just shy of 10,000 votes in the fall,” cried Corzine, in a homage to the red county’s ability to go blue in the presidential contest, even if the Democrats here couldn’t win a freeholder seat and U.S. Rep. Leonard Lance (R-Clinton) stung Stender.

Hyping the everyman image, Corzine said, “I used to talk about being a banker. Now I talk about being a Marine. It seems to be more popular these days. If you don’t think I’m a fighter, then you don’t know me. You know, I fought (Hank) Paulson and (John) Thain when I was at Goldman Sachs. They didn’t have the right values then, at Goldman, and they didn’t have the right values after Goldman.”

Trickled out in a few past recent speeches, the amped of reference to his former Goldman colleagues contained the back to back blast of Paulson’shands-off-the-market efforts as Secreatry of the Treasury and Thain’s much publicized bullish defense of exeucutive bonuses depite the economic downturn.

From afar, Somerset County Republican Chairman Dale Florio doesn’t deny his rivals here their Saturday morning right to whoop it up over the governor’s arrival. But he does think they’ve thrown their best three-punch combination in Somerset. They had 2006 with Bob Menendez and Stender running on a seismic Bush backlash. Then they had the parks commission scandal in 2007. In 2008, they had the benefit of Obama at the top of the ticket.

“But our freeholder candidates still won comfortably,” said Florio. “This year with Corzine at the top of the ticket and his dismal record, you’ll see our numbers revert to form.”

Heading into his own April 2 convention where his party expects to back former U.S. Attorney Chris Chrisite to run against Corzine, Florio doesn’t get cocky when it comes to keeping an eye on this Schaffer-led team of Democrats.

For all their fighting words today, he just doesn’t think he’ll have to go so far as to take them under the Manville tower. 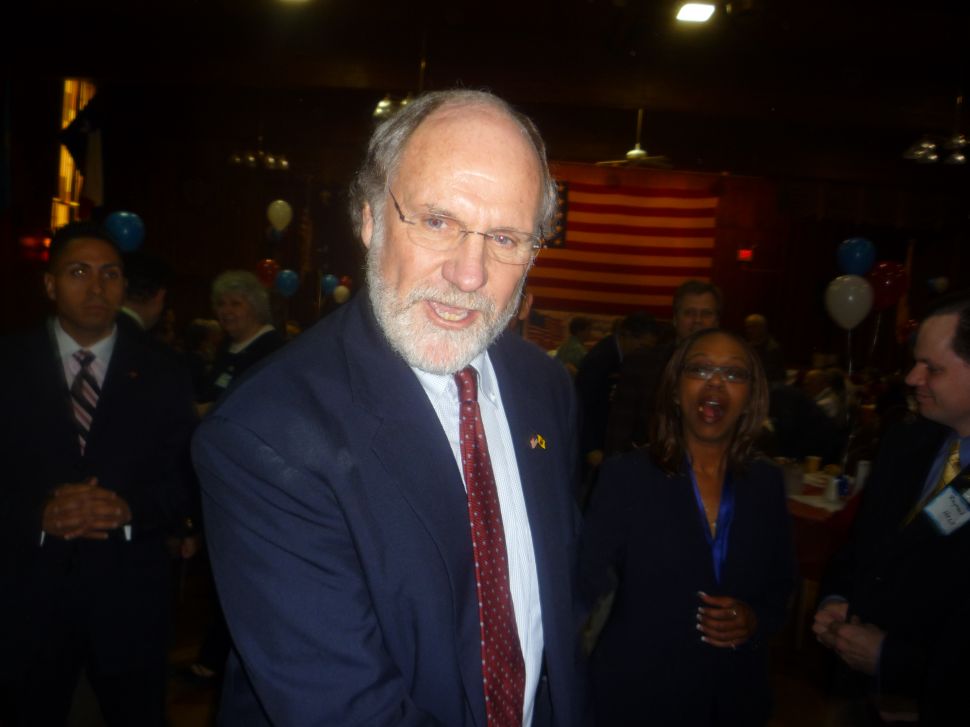