But if the 36th Legislative District remains a decided field of contention this cycle (as is the 1st District in New Jersey’s deep south), two other districts – the 2nd and the 14th – early identified by operatives in both parties as potential battlegrounds in their own right, at least for the moment do not appear to be marquee headline races.

Certainly that opens up the possibility for North Country Democrats and Republicans to expend more resources in the 36th, where Democrats enjoy a 2-1 edge but where the Dems must run with an unpopular leading man in Gov. Jon Corzine.

Yet it could also open up other regions, other terrain, formerly classified as green zones. Arguably chief among these, particularly given its bordering proximity to the 14th, is the 12th District, where Assemblyman Declan O’Scanlon (R-Little Silver) and Assemblywoman Caroline Casagrande (R-Colts Neck) seek reelection, and last night double-teamed at a town hall meeting in Manalapan.

It may have a meaning later.

Democrats insist 12 should be a target. They have a 10,000-vote registration edge here and a commitment from the Assembly Majority Office that if their candidates can raise $100,000 – $150,000, the PAC will kick in as much from its own coffers, according to operative Pat Politano.

Not a walk, no. But doable. Instead,Republicans see another fight, much more tangible and winnablethan what the Democrats claim to see as their opportunity in the 12th:retrieving what their rivals built here at the county level with Dem wins over the last three years.

“This is a change election,” said GOP operative Mark Duffy with the Assembly Minority Office. “Independents are angered by the direction the state is headed in. That’s why the Democrats are having trouble fielding candidates in those districts where we’re defending. Our freshman incumbents have done a lot of hard work being on the side of taxpayers. They’ve laid a good foundation. We’ve been more successful because of the issue environment. We have a governor who proposed a tax plan that initially included elimination of tax rebates – potentially lethal for any Democrat candidacy.”

This much is true: in the larger framework of the coming statewide contest, GOP gubernatorial frontrunner Chris Christie needs Bergen to defeat Corzine, and the Bergen-based 36th is exactly that prized chunk of territory he covets in order to strengthen his play for the sprawling, half-a-million-vote-strong county.

In addition to fierce, plugged-in candidates in the 36th, the Christie team enjoys other Bergen amenities, including the storyline of a public corruption trial, scheduled to begin in September, featuring former Bergen County Democratic Organization Chairman Joe Ferriero, the man who built the Democratic Party into a powerhouse in Bergen.

Moreover, many GOP insiders’ believe proven Republican vote-getter Bergen County Clerk Kathe Donovan is the favorite to run for lieutenant governor on a ticket with Christie, augmenting his Bergen ammunition.

Notwithstanding GOP angst in the 14th District these past several days as both the Mercer and Middlesex party organizations affirmed less-than barrel-chested candidates to challenge Assemblywoman Linda Greenstein (D-Plainsboro) and Assemblyman Wayne DeAngelo (D-Hamilton), deep background Republicans argue it’s better anyway to arm-up in 36 rather than get bogged in an organized labor war in the 14th.

Like the Bergen district in question, Democrats in 14 possess a 2-1 advantage over Republicans. But the terrain is different. Here the Democrats have at least one issue in their favor: Corzine’s decision to date not to fire state workers. Veteran workhorse Greenstein, chair of the Judiciary Committee, wins elections, a trend demonstrated most forcefully in 2007, when state Sen. Bill Baroni (R-Hamilton) buried his Democratic opponent at the top of the ticket, even as the assemblywoman defeated her closest GOP challenger – a hard-charging Hamilton Councilman Tom Goodwin – by 4,000 votes.

That same year, labor leader DeAngelo literally fielded an army of organized union support in the streets of the 14th – in both Mercer and Middlesex counties. The fact that the pro-union Baroni in his senate race commanded virtually the same support threw a ground-leveling wildcard into the race that wouldn’t have been there this time, unless the Republicans could have summoned another strong labor man to challenge DeAngelo.

Could a devious Republican on a Steve Sweeney stealth mission try to force an AFL-CIO versus state workers’ union battle? Maybe against another candidate, or in another district – but not here against DeAngelo, whose labor support in this union fortress is cemented on all asides.

Further complicating Republican chances in the 14th are Christie’s public statements that he would fire state workers, a hard-line message Corzine can attempt to twist into a weapon in the 14th, where he seems constantly to be fending off an all-out labor revolt, one that Democrats argue would likely be worse with Christie in office.

Not quite the size of GOP bewilderment in the 14th, Democratic Party rank and filers girding for a fight in the 2nd against Assemblyman Vince Polistina (R-Egg Harbor Township) and Assemblyman John Amodeo (R-Margate), experienced some twinge of disappointment when the party picked relative neophytes Jimmy Martinez and Reginald Floyd at the Atlantic County Democratic Convention last Sunday night.

As with the Republicans’ 14th District candidates, the pair could be swapped out prior to the April 6th filing deadline, and some South Jersey Democratic Party sources privately insist that will be the case.

But you could call it a tough case.

Yes, the number of registered Democrats outdistances Republicans in 2, but those numbers – 42,000 to 32,000 – are closer than they are in 36 or 14, and not especially comforting to the majority party with Corzine’s poll numbers low and popular Republican incumbents in gear to defend their turf.

Polistina is a rising GOP star here, and union crane operator Amodeo owns the backing of labor, much the same way DeAngelo owns it in the 14th for the other party.

The apparent concessions in 2 and 14 over the past two weeks caused the political establishment above 195 to lurch immediately northward to an all-consuming 36th.

Then came Monmouth County freeholder Barbara McMorrow's announcement last Thursday that she would not pursue reelection in order to address a health crisis.

Arguably the most popular freeholder in Monmouth, McMorrow was the Democrats’ long range patrol point person on the freeholder board, the first of their party three years ago to get elected in almost two decades, a retired school principal from Howell who sparked a streak of county-level wins by the Democrats that resulted in their securing the majority last year.

It was a major trifecta for the Democrats, and for Chairman Victor Scudiery, who’s served as the leader of his party through most of that dismal near 20-year period, where there were few celebrations, where even as recently as last year John McCain defeated Barack Obama by 11,000 votes, even as Obama carved out a 10,000-win in the GOP stronghold of Somerset.

McMorrow caused hand-wringing in her own party – enough to force State Chair Joe Cryan to go on the record with a growled pledge that regardless of the recommendations of panicked operatives on the ground, he would back her.

Cryan knew her value in this county where Obama inflated Democratic Party registration last year, but where 200,000 unaffiliated voters generally swing Republican even at the height of Bush world and evidenced most recently by McCain’s win in Monmouth over a high-volume charge for Obama led by minority-heavy shore towns like Neptune, Long Branch and Asbury Park.

Perceived as unbossed and independent – critical qualities here in Monmouth, where many Republicans are already quietly unnerved by Party Chair Joe Oxley’s employment at the law firm of Democratic Party bigshotDonald Scarinci – Freeholder Director McMorrow looked like the favorite for reelection, great news for Democrats intent on securing their majority.

Meanwhile, for weeks, underground Dems confirmed that Manalapan Mayor Michelle Roth – now in her second term in local office in the 12th District’s second most voter-rich town after Marlboro – would run for the Assembly in the 12th District against Casagrande and O'Scanlon.

Apparently the only obstacle preventing her formal announcement was the party’s failure – and this was a confession coming from all levels – state, county, local – to find Roth a suitable running mate.

Republicans watched gleefully as their counterparts seemed to exhaust their options for the Assembly race, and having averted the threat of Marlboro Mayor John Hornik when he said he wouldn’t challenge this year, O’Scanlon and Casagrande appeared to be creeping toward cruise control, particularly after McMorrow made her announcement.

Republican BlackBerrys started humming in anticipation of their confounded rivals’ switching Roth out of the Assembly race and into the freeholder contest to at the very least protect their Monmouth majority on the board.

What’s the use of one or two more warm bodies in the Assembly when county control is at stake?

But to date the Democrats have shown no indication that they intend to move Roth out of a 12th District Assembly race strategy, and remain determined to find her a running mate – either a ruse, or a real indication that Politano’s point about the Democrats taking the district seriously, is true.

Middletown Committeeman Sean Byrnes and Democratic Party stalwart Mike Beson, a former mayor of Neptune who chaired the John Edwards for President Campaign, submitted their names to the party to run for the freeholder seat McMorrow intends to vacate.

This on the heels of a year in which Freeholder Amy Mallet defeated former Red Bank Councilman John Curley with a combination of name ID built from her prior year’s Assembly run, enlivened handlers who exploited a disjointed Republican freeholders’ campaign in which Curley was perceived to run in part against his own establishment party, and – and this is key for the Democrats – high volume turnout among women voters in Manalapan and Marlboro.

“I know everyone praises Mr. Curley as this great, shoe leather candidate, but I’m sorry, in a county with 400,000 registered voters, you’re not going to win if you don’t have mail,” said Democratic Party spokesman Michael Mangan, energized by his rivals' decision to run Curley again. “Mr. Curley received his party’s backing on a second ballot, earning 36-27 votes. Clearly, they’re not even convinced he’s the right guy. Look, Dick Zimmer (in a failed statewide Senate bid) won the county by 15,000 votes, and Mr. Curley still couldn’t win.

“As a Democrat, I’m very happy to hear he’s their candidate,” Mangan added. “He spent a good part of last year bashing his running mate. I can’t for the life of me understand what the Republicans see in him, but as a Democratic strategist, I’m delighted.”

But as of today the Democrats are struggling to find and fieldcomplete slates in Monmouth. They've lost McMorrow. And although they say they are committed to running Roth on a competitive ticket in the 12th, the district’s competitive allure, if there is indeed a dearth of candidates here as sources say there are, contains none of the same luster Pio Costa and Diorio saw – and continue to see – in the 36th, which after all the drama everywhere else, Republicans affirm is definitely in play. 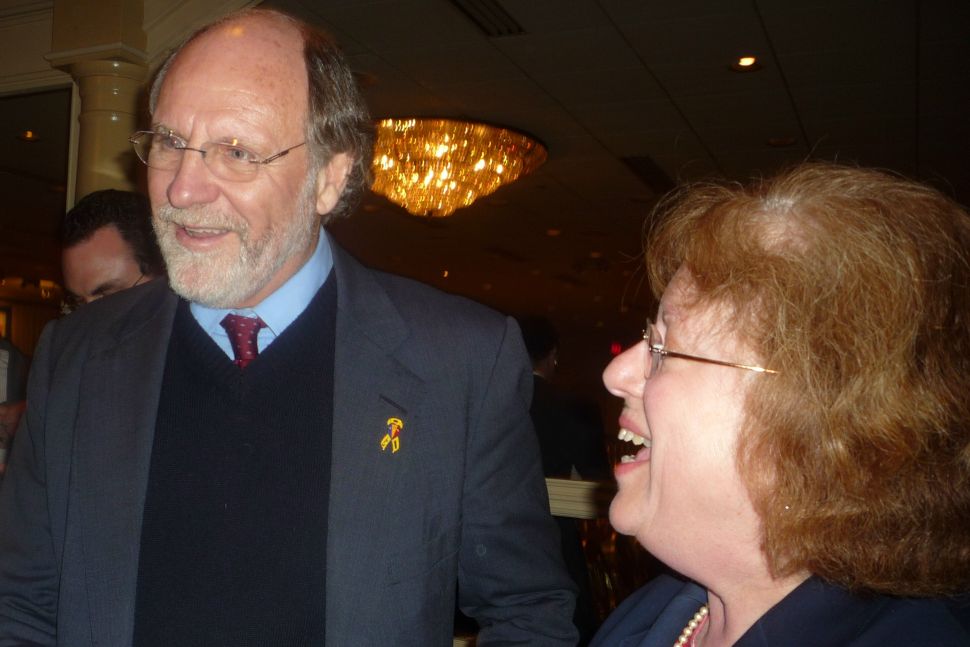