MIDDLETOWN – With his right flank protected as his campaign continues to club his chief gubernatorial rival in a new television ad, gubernatorial candidate Chris Christie tried to project GOP vanguard presence with a frontal attack on Gov. Jon Corzine at a longtime local business on Route 35 that is struggling to remain competitive.

“In the middle of a recession, he wants to raise income taxes, and take away the deductibility on property taxes,” Christie told the owners of Add on Pools, a 40-year old operation that clings to the same highway that once fed one of the country’s last drive-in-movie theaters up the road before it finally folded.

“He’s out of touch,” Christie said of the governor. “He wants universal pre-K. How is he going to pay for that? I don’t think he’s a bad guy. Just out of touch. He thinks everything’s run out of Trenton.”

Then he added, “How can Steve Lonegan be against government, as he says he is, when under his tax plan, 70% of the state is going to pay more money in income taxes?”

The slash at Lonegan notwithstanding, Christie opened up repeatedly and almost exclusively on Trenton and what he called Corzine’s “gimmicky” approach to budgeting. He also continued to thrum incredulously on State Treasurer David Rousseau’s comment that New Jerseyans aren’t overtaxed.

“Do you realize we’re giving a $998 million subsidy for Newark in one year? It’s not a resource issue. These schools have the resources. It’s an accountability issue,” said Christie, who supports charter schools and gave a nod to the Robert Treat Academy as a model of what can be done in urban education.

They specialize in pool fixtures here at Add on Pools, some of it higher-end stuff, but area construction has slowed and so store sales are down. If they didn’t own the 11 acres the store sits on, they would have been gone years ago.

Clusters of old neighborhoods crowd into one another in a blue collar buffer zone between the highway and the newer McMansions dominating big pieces of towns like Holmdel.

Although he sold a pro-business message heavy on tax cuts, deregulation and greater competition in the area of health care insurance to a small and receptive crowd, Christie also signaled his willingness to slap at a Republican sacred cow, as he echoed Corzine’s commonly reiterated point that local school district costs drive property taxes.

“Towns and school boards are not merging and undertaking necessary efficiencies to keep property taxes down,” Christie said. “I’ve said this from the beginning. I’ve been consistent. People feel as though they cannot live here anymore because of the taxes, and part of the solution is people must get tougher on their local elected officials. School costs are a real contributor. Scape-goating the cities doesn’t make any sense. The fact that graduation rates are down and children are not learning is a tragedy, and morally unacceptable.” 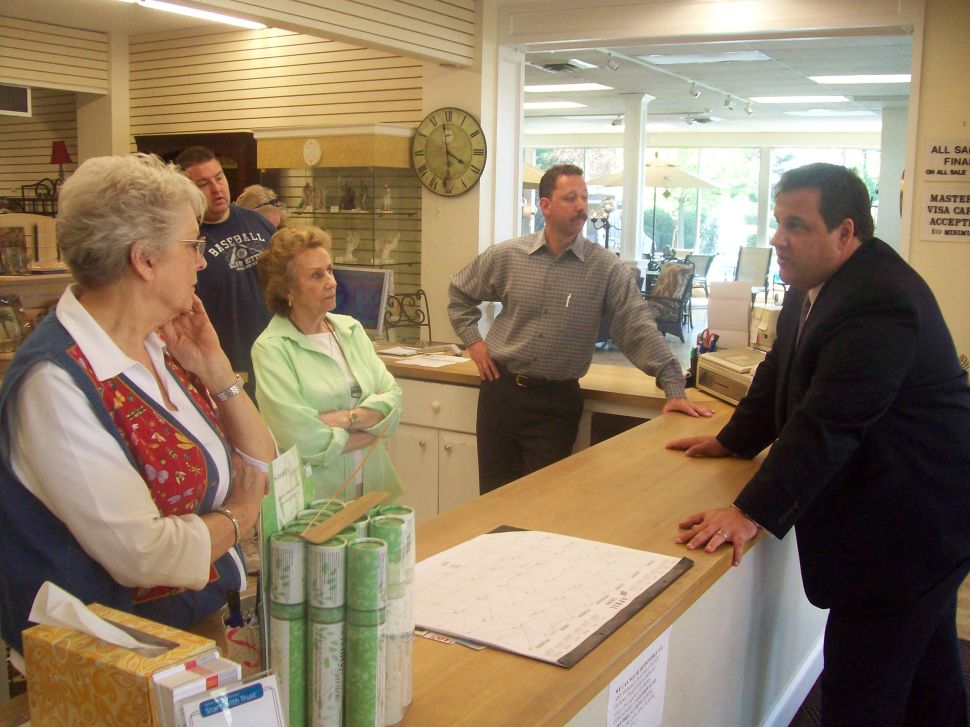