FLEMINGTON – Stung by his unsuccessful bid for the vacant 23rd District State Senate seat at a joint Warren-Hunterdon County Convention earlier this year, Assemblyman Mike Doherty (R-Washington Twp.) now mobilizes a counter-attack to the same GOP establishment that bucked him in moves not dissimilar from those of fellow movement conservative, former Bogota Mayor Steve Lonegan, who stood with Doherty today in a show of solidarity.

Beaten by state Sen. Marcia Karrow (R-Raritan Twp.), Doherty hopes to corral enough hinterlands party support to take revenge in Hunterdon and Warren as he renounces his own Assembly seat to try to move up and claim the state senate seat U.S. Rep. Leonard Lance (R-Clinton) left at the end of last year, and which Karrow now holds.

Then there’s gubernatorial candidate Lonegan, who between now and June 2nd works to shed the early campaign casualty image created when presumptive GOP frontrunner Chris Christie buried him in the GOP county conventions.

They have long backed each other, Lonegan and Doherty.

“This was the guy who stopped borrowing without voter approval and consequently incurred the wrath of his own party,” roared Doherty, standing on the steps of the Hunterdon County Courthouse with Lonegan and his 23rd District running mates, Assembly candidate Ed Smith and Freeholder candidate Jennifer McClurg. “He’s the guy that fought Gov. Jon Corzine’s toll roads scheme. Remember that, folks? That scheme where he wanted to sell our toll roads to his friends on Wall Street for $40 billion?”

When he spoke, flat tax advocate and fiscal and social conservative Lonegan tried to stem the fear among fellow members of his party that hard core conservatives can’t win a general election. He pointed to the 2007 defeat of the Corzine-backed embryonic stem cell stimulus ballot question as an example of the building overlap between New Jersey voters and the conservative movement.

“This is a conservative state, hungry for conservative leadership,” said Lonegan, who dismissed the likes of Dick Zimmer (2008) and Tom Kean, Jr. (2006) as nice guy moderates who couldn’t get it done because they didn’t dig in unequivocally with conservative positions.

“You see the fear in people when you talk about social issues,” Lonegan said. “We should remind people that this is a Judeo-Christian nation and we are endowed by our creator with certain inalienable rights. We need to right people of our 2nd Amendment rights and the sanctity of human life. Barack Obama ran in the Democrat Primary as a hard-left liberal and he ran in the general election as a hard left liberal by turning out his base voters for a leftwing agenda. He won. It’s time the Republicans ran on their principles.”

There were scattered hand claps in the plaza among the two handfuls of people who stood at the bottom of the steps where Lonegan’s makeshift podium loomed.

A fierce proponent of traditional marriage, Doherty reiterated his own view that the issue of marriage equality should go to the voters and not be decided in the halls of the Statehouse.

“Please, make it stop,” local businesswoman Joan Schaming pleaded when the candidates finished their remarks. “I have customers who come into my store all the time who just can’t take it anymore. This governor has to be defeated.”

Antonia Hollain of White House Station said Democratic machine politics drove her out of Elizabeth and now as she struggles to stay in Hunterdon County, she wants a conservative governor who can restore the economy with some sound business principles.

“My father didn’t flee a socialist country (Cuba) so we could live in one here,” said Hollain, a Lonegan-Doherty backer. 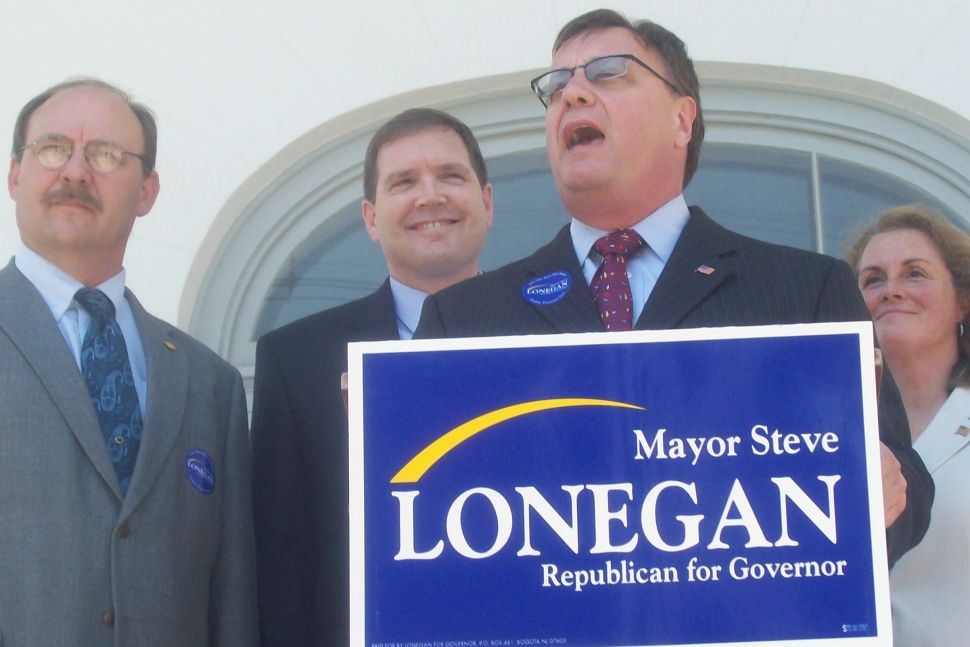