LONG HILL – Bullied by Union County in the 21st District, two men from neighboring Morris County entered the Republican Primary, but don’t seem to be able to get out of each other’s way as they try to mutually make the case that they’re bigger than Long Hill Township.

Not only are they from the same county and same town, but making things triply tough on Mayor George Vitureira and School Board member Bruce Meringolo is the fact that they’re running against the widow of Assemblyman Eric Munoz (R-Summit). The finer complexities of politics aside, it’s hard to get in a street fight with the next of kin of a beloved former lawmaker, and a nurse at that – and a woman on top of it.

Assemblyman Jon Bramnick (R-Westfield) is also in this race, and in a good place organization-wise, seeking reelection from the bigger Union County portion of the district with the backing of party leadership.

But Vitureira and Meringolo are committed, if not aligned. Morris County Republican chairman John Sette has endorsed Bramnick for reelection, and, from his own county stable, Vitureira over Meringolo.

Without those strategic advantages that derive from occupying a larger foothold in the district, they’re both running on the issues.

A commercial real estate agent, family man, and past president of the local Republican club, Meringolo says the contest is not about triangulation.

“Mayor Vitureira is good public servant who’s done a good job in this town,” he said. “I have nothing bad to say about him. My real focus is to try to raise the visibility of school funding raise, to raise voice and make noise about school funding.

“Nancy Munoz is a nice lady,” Meringolo added. “I met her once. No one denies her husband did a tremendous job. But when we give a billion dollars to Trenton in this district, and all we get back is less than three percent in state aid, it’s time for a change.”

For his part, Vitureira grimly gives a nod to the unfortunate political reality of running as a resident of a weaker portion of the district in question, but will not be deterred. As for Meringolo’s presence in the race, such is the reality of democracy, he says.

“Everybody’s entitled to run,” said the mayor. “The electorate casts the votes not the bosses.”

The Republican organizations have not yet established a date certain to fill the seat of Assemblyman Munoz, who died two weeks ago, but every indication is that Nancy Munoz will assume his seat as she pursues the Republican nomination on June 6th in the field with Bramnick, Vitureira and Meringolo. 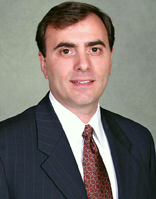