Monmouth County Sheriff Kim Guadagno, a former federal prosecutor, says she's not interested in running for Lt. Governor, but like many possible candidates stopped short of ruling it out entirely.

"I'm happy being Sheriff of Monmouth County," said Guadagno, who was in Somerville today to join ten other Republican Sheriff's who endorsed former U.S. Attorney Christopher Christie for the GOP gubernatorial nomination.

While Guadagno dismissed the idea that she could be considered for the number two slot on Christie's ticket, she would not deny that she would answer the call if she were asked.

Guadagno served as an Assistant U.S. Attorney and as an Assistant state Attorney General before winning election as a Monmouth Beach Commissioner. She was elected Sheriff in 2007, defeating Democrat Jack Hill, the Belmar Police Chief. 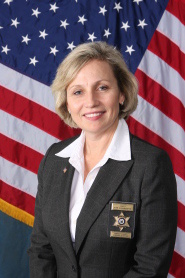