We lost something of a simpler world somewhere but never lost the toughness and in the vaudeville, piano banging styling he learned as a kid in his family’s Plaza Ballroom in Paterson, Floyd “Uncle Floyd” Vivino forged a lyrical New Jersey foundation for almost everything, including his blue collar, one leg up from hobo junction write-in candidacy for governor this year.

“This wasn’t my idea,” Vivino told PolitickerNJ.com. “I didn’t seek this out. It’s kind of like the same thing that happened to George Washington. He didn’t want to be president. He wanted to be a planter. Me, all I want is my puppets. But they want me.”

A father of six and resident of Wayne, the 57-year old performance act legend with the ubiquitous porkpie hat lost hisgig at Sirius radio in December and ever since has thrown his road act for all ages into overdrive, as always rolling out the ebonies and ivories to entertain Democrats and Republicans alike, pulling nonpartisan double duty for U.S. Rep. Bill Pascrell (D-Paterson) and Somerset County GOP Chairman Dale Florio.

“My father was an Italian construction worker and I grew up a Democrat, but I drifted away from all of that at one point and just focused on the person,” said Vivino. “I liked Ronald Reagan. I didn’t think Richard Nixon was as bad as Democrats said he was. Obama? I like him. At least he’s got that spark of hope that we’ve all been looking for.”

He doesn’t have much of an opinionabout either incumbent DemocraticGov. Jon Corzine or presumptive Republican frontrunner Chris Christie.

“I don’t know anything about the governor,” said the candidate. “All I know is he proposed this freeze on tax deductions, which wasn’t a good idea, considering we’re already paying $14,000 in property taxes.

“As for Christie,” he added, “I’ve never heard of her. Who? Oh, not Christie Whitman, the former governor. The former U.S. Attorney? Wouldn’t know. Maybe I met him at a banquet or something. Can’t remember.”

While he anticipates the major parties’ candidates chest pounding for New York and Philadelphia television media time, Vivino said he would conduct his own, ELEC-imposed under $1,200candidacy out of watering holes, sea shanties, bowling allies, roller rinks, Elks Clubs’ and Lucy the Elephant in Margate.

“As a write-in candidate I don’t have to worry about using media to promote myself,” said Vivino. “I don’t have to afford equal time to my competitors. I’d gladly debate them, but only if they would agree to a beer drinking contest before the debate. If they want to look at the faces of the people up close and touch the hands of people there at the bar who have been working hard, I would definitely debate them.”

For now, Vivino’s Garden State Jubilee ironically airs in Rockland, New York, but his producers, Nelson Page and Tom Myers, are trying to interest other radio stations in the throwback, unscripted Jack Benny-style variety show, which features Uncle Floyd’s surreal compositions and performances with a big dose of Jersey.

“A lot of people ask him to be governor; of course, many of them half jokingly, but some seriously,” said Myers, who helped promote Vivino’s write-in candidacy. “Like a lot of people, I grew up watching Uncle Floyd on television in the 1970s. I think he's yet to peak. I think with this recession, a lot of people identify with Uncle Floyd’s working class brand of entertainment.They have come back to him. If anything, his candidacy will get the real candidates to appeal to real people.”

As he proudly watches his own son head out on an Army hitch as a tank commander, Vivino has several pressing issues he wants to discuss on the campaign trail.

“I’m a fan of pigeons and we have to find funding to renovate their pigeon coops around the state. If you go to downtown Jersey City or Paterson sometimes you see only pigeons and no people. They need help. I think Trenton has ignored the pigeon issue for decades.”

He wants to pave over the Hudson River as a solution to the stalled ARC tunnel development and New York-New Jersey traffic jams. “Make it a straight shot for everyone,” he said.

Additional initiatives would include making the Parkway one way in a southern direction, building wind machines to blow the aroma of pine from South Jersey into the pressure-filled northern region of the state, and addressing the problem of frozen custard clogging the boardwalks.

An unabashed admirer of the survivor spirit of New Jerseyans, Vivino said he would create a lieutenant governor for every county and if something happened to him as governor he would hope that, according to the code of his home state, his 21 appointed LGs would fight it out for governor.

He would give the edge to his Passaic County lieutenant governor, retired boxing trainer Lou Duva.

“This was a guy who was thrown off a bus in an Army uniform in the 1950s for giving his seat to a black woman, who then beat up five guys who had a problem with that,” said Vivino. “I like that.

“I love the state,” Vivino added. “I love it, everything about it. There’s no place as diversified as we are. Every other state, something happens, they fall apart. Us? We made the sails for the Civil War ships, the cannonballs and Colt 45s. We’re self-sufficient. If we had to close our borders – and it was reported somewhere that I favor seceding from the union, not true – if we had to close our borders, we could defend and feed ourselves, with blueberries and cranberries alone, if it came to that. We’re a tough people, an immigrant people. People come to New Jersey from everywhere and they adapt. When I was a kid in Paterson and it snowed, you put a ratty chair out in front of your house to mark the spot where you park your car. And they still do that today. You put a chair out in the street when you dig out your car, and nobody touches that spot.” 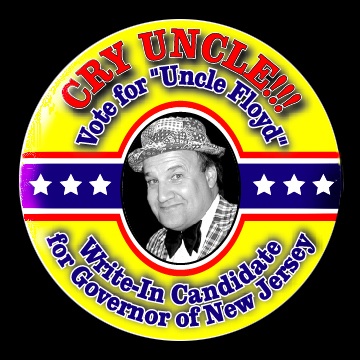