PLAINFIELD – Running as the New Democrat successor of the late Mayor Al McWilliams, 3rd Ward Councilman Adrian Mapp opened his campaign headquarters on Watchung Avenue Saturday and promised to end what he described as “a dictatorial form of government” in Union County’s Queen City, and to fairly represent all four wards.

“I will create an economic development plan that is not developer-driven, and develop an aggressive marketing plan to enhance Plainfield’s image,” said Mapp, standing at a podium in front of an American Flag hung from the ceiling. “With a transit village tax credit, the train station can be our linch pin for revitalization. I would also like to undertake a study of all brownfield structures and create retail store ratables where possible.”

A large concentration of those old structures stands in the 4th Ward, the city’s longtime poorest residential district and the epicenter of the 1967 Plainfield riots. When she first won election nearly four years ago with the establishment backing of Assemblyman Jerry Green (D-Plainfield) , Mayor Sharon Robinson-Briggs defeated then-incumbent Mayor Al McWilliams in the 4th, 868 to 698 votes.

As a candidate on the New Democrats’ ticket with Mapp last year, McWilliams’ daughter, At-Large Councilwoman Annie McWilliams, came back and crushed Robinson-Briggs ally Councilman Harold Gibson. But while she beat him decisively in the 4th Ward, (233 to 151 votes), voter turnout remained low there compared to Plainfield’s other three wards. In the more affluent, New Democrat-controlled 2nd Ward, where McWilliams lives, she buried Gibson, 738 to 270.

On Saturday, Mapp made a special appeal to the 4th.

“We cannot leave anybody behind,” said the former freeholder, a native of Barbados who along with his wife raised two daughters in this city. “We must move forward with all four wards.”

Touted by his allies as an egghead who will be able to make surgical decisions regarding the city’s budget, Mapp works as the chief financial officer for the City of Roselle. That town’s mayor, Garrett Smith, Mapp’s wife Emilia and New Democrat Assembly candidate Rick Smiley joined a crowd of about 50 people at the storefront-sized downtown HQ in support of Mapp, who’s challenging Mayor Robinson-Briggs in the June2nd Democratic Primary.

“You have a great man here,” Smith told Mapp’s allies. “You don’t get MBAs and CPAs everyday in this line, because of the dirt in politics, quality people don’t want to run. But you’ve got a gem, and he will be an awesome mayor.”

"During Sharon's tenure, she has cut the murder rate by 300% – from 15 to five – and stabilized taxes," Politano said. "Come on, this is a candidate (Mapp) who collects two public paychecks and wants to be somebody. He's going nowhere. When he was a councilman (during the McWilliams era), he didn't even know the 4th Ward existed. He wanted to make cuts to the police department as a so-called fiscal lconservative without considering the impact in the greatest areas of need."

There is a larger political context to the mayor's race here, as Green and Assemblywoman Linda Stender (D-Fanwood) face a 22nd District general election challenge from Republicans former Scotch Plains Mayor Martin Marks and his running mate, Bo Vastine. In the meantime, they will have to get through Smiley, 49, who heads the ticket in Plainfield that includes Mapp.

Employed by the City of Plainfield for 23 years as director of community relations among other jobs, Smiley is on leave from his job coordinating the opening of Headstart facilities, to focus on the campaign.

“The closing of Muhlenberg Hospital transcends Plainfield,” said Smiley, speaking to his signature campaign issue. “My message will get around. I’ve got a little time now to get my message out there.”

The New Democrats’ decision to not field a second assembly candidate indicates their focus on the mayor’s race. “I’m comfortable having Rick on the ticket,” said Mapp. “There is such a level of dissatisfaction in Plainfield and in the 22nd District. Every town in the legislative district was affected by the closing of the hospital.”

In the speech he gave on Saturday following a shorter address delivered by Smiley, Mapp invoked the idealism of Lincoln and Obama, and committed to embracing renewable energy, building the police department to a complement of 160 officers, and ensuring the federal census properly records Plainfield’s population over the 50,000 mark in order to land a coveted category to qualify for more inner city funding.

“Most importantly,” he said, “I will listen to you.”

On the battlefield of ward politics, the knock on Mapp is he’s too cerebral, but his allies repeatedly plugged his intellect and detail-oriented approach as irrefutable strengths. The well-spoken candidate himself referred to his hard background lest anyone confuse him with a silver spoon transplant.

“I was raised in a one-parent household in extreme poverty,” he said.

As the challenger reached the emotional high point of his speech, a car alarm went off in the adjoining alleyway. Undeterred, Mapp’s vocal chords competed momentarily before outlasting the distraction.

While the New Democrats possess the advantage of having just vaulted Mapp and McWilliams onto the council last year, they still face the money and machine edge enjoyed by the establishment, and a formidable opponent in the mayor.

New Democrat School Board Member Christian Estevez told the crowd, “That tired machine will recruit teenagers to work for them and those teenagers will take their money and dump their pamphlets in the gutter. But we’ll be out there working for every vote.” 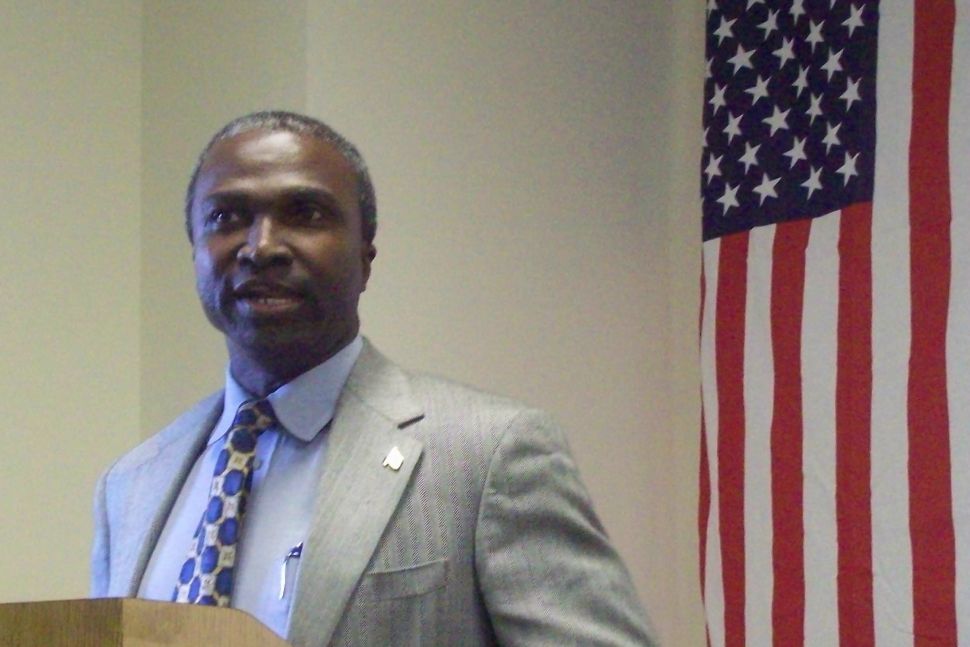