TRENTON – Denouncing the two major parties as hand-in-hand contributors to New Jersey’s fiscal crisis and arguing that only an independent can make the necessary changes, former EPA regional administrator Chris Daggett launched his independent campaign for governor in the Statehouse Annex this afternoon.

“Let’s tell the truth,” said Daggett, a former Republican, who served as deputy chief of staff to Gov. Thomas Kean and as commissioner of the Department of Environmental Protection Agency (DPA). “New Jersey state spending isn’t just state revenue, but also federal funds, and dedicated and revolving funds that include, for example, fees and open space and transportation trust fund spending. Total New Jersey state spending was actually $47.5 billion last year, and it is projected to grow to $48.3 billion next year – the largest amount of money spent by any state government in New Jersey history."

Offering himself as a manager with no special interest baggage and a record of experience in working with groups coming at issues from divergent angles, the mild-mannered Daggett committed to harnessing all levels of government and the private sector in common cause to make New Jersey an affordable and environmentally sound state in which to live.

He refused to simply scapegoat Trenton.

“The biggest rise in government spending is taking place not in the state government, but at the local level,” said Daggett, 59, of Bernards Township. “How can school boards and municipal governments continue to give out 4 percent annual salary raises when the citizens of their towns are losing their jobs and taking unpaid furloughs and pay cuts?

“We have met the enemy and it is our political parties,” Daggett added. “The parties hide behind the mantra of ‘home rule’ not only because they believe it is too difficult politically to reduce the ruinous property taxes that are biggest obstacle to New Jersey’s economic growth, but because those property taxes fund their patronage machines. We – the people of New Jersey – have to start taking control of our government and living within our means.”

Engaged in an effort to raise $360,000 to qualify for public campaign financing and the overall $3.6 million he needs to get his name on the ballot, Daggett praised President Barack Obama’s 2008 campaign, including Obama’s small dollar donation drive, while panning as “inherently unfair” the politics of incumbent Democratic Gov. Jon Corzine, who he said was again attempting to “buy an election.”

Assuming he can qualify for public funds, Daggett said he absolutely intends to remain in the race until the end.

His roots and record as an environmental administrator broughtSierra Club Executive Director Jeff Tittel and New Jersey Environmental Federation Director David Pringle to today's press conference, where they quietly sang his praises if refrained from endorsing him outright.

“We have 20,000 contaminated sites that need to be cleaned up,” state Sen. Kevin O’Toole (R-Cedar Grove) reminded the commissioner. “How are we going to clean those up to make New Jersey competitive without short-changing the environment?”

Mauriello praised the work Daggett had done in his role as chairman of a governor’s commission assigned to make the DEP more efficient. He told O’Toole that his office is in the process of implementing the Daggett commission’s advice.

“Gov. Corzine’s record on the environment has been mixed,” Daggett said later. “But in the end, he hasn’t taken leadership on the open space issue.” 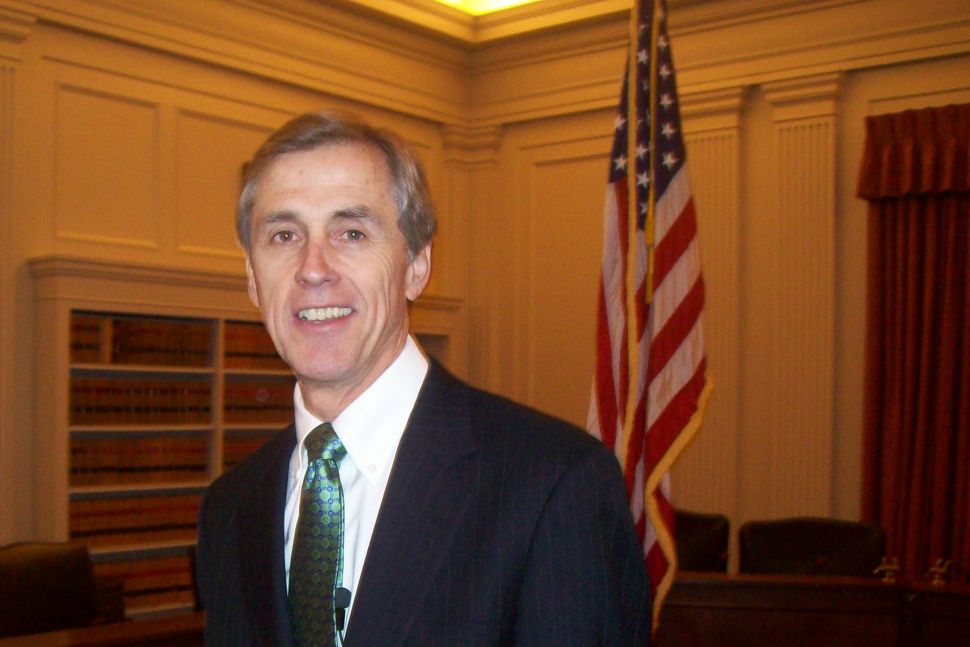