Nancy Munoz defeated Long Hill School Board member Bruce Meringolo and Long Hill Mayor George Vitureira respectively by a vote of 174 to 34 to 16.

The win came with a back story of some gritted teeth, and a few sets of those were still clearly on edge as members of the county committee filed into tonight’s special convention here at L’Affair on Route 22, and appeared little mollified by state Sen. Tom Kean’s (R-Westfield) observation that county chairmen from Morris and Essex and Somerset had not arrived “as yet.”

The truth was they weren’t there, and they weren’t going to be there – no chairman used to playing the leading man would be able to bear the inevitable loss coming in here – not as long as Union County chairman Phil Morin, who holds the bulk of power in the Union County-heavy 21st District, hadfinally and firmlygone and backed the widow of Munoz.

That crucial support played havoc with the ambitions of at least two rival candidates – Meringolo and Vitureira, both from Morris County and both from Long Hill Township – who filed their peititions to get on the primary ballot and who arrived tonight prepared to deliver impassioned speeches to an audience already all out for Munoz – and did, to Morin’s quiet consternation and to the committee’s ultimate resounding rejection of both of them.

Six-year veteran Bramnick nominated Munoz after both he and Kean paid tribute to her husband, a surgeon at the University of Medicine and Dentistry of New Jersey who died last month after undergoing heart surgery.

Blunting in advance the assault that would come when both Meringolo and Vitureira presented themselves as the most “qualified” and most “experienced” of the candidates seeking the late assemblyman’s seat, Munoz noted her work as a clinical nurse specialist who was primed to continue her husband’s work on healthcare issues.

She laid out her party credentials.

There were whoops at the end in the crowd of 228 committee people.

Vitureira would say later that he found the process anti-democratic, and if he would give at least one verbal tweak of Morin as he gripped the podium prior to his speech, Meringolo in enemy territory here went on a ten-minute jag heavy on irony, slowly turning solemn nods of agreement and fair play huzzahs when he hit the requisite Republican high notes in the first minute of his speech into grim and surly “get him off the stage” body language as his speech wore on – and on.

The local school board member and real estate agent said he would like to find a more equitable way to distribute education dollars. He wants to scrap the Council on Affordable Housing (COAH).

Every new topic came with the promise that it would be the last – even as he pursued yet another topic afresh.

Some groans ensued as they realized Meringolo was intent on making a statement.

“When someone is anointed, that circumvents democracy,” Meringolo said finally.

And shortly thereafter, he was done.

An unsmiling Morin went to the podium. Apparently the chairman didn’t like the comment about subverting democracy.

“I should point out that when Assemblyman Bramnick made his speech in 2003, the speech was a minute and a half and he overwhelmingly won,” Morin chastised Meringolo as the latter crossed the carpet back to his seat.

Up next, and up last, Vitureira went to the podium with a four minute speech he would later say he had to cut down from eight minutes and he corrected Morin with an edge in his voice on the pronunciation of his name and steeled up to project pride as the son of a Uruguayan immigrant running for the Assembly even as his voice also carried some tone of resignation to his predicament as a man from a smaller portion of the legislative district running against the wife of a beloved late Assemblyman.

The first thing those who entered the banquet hall had seen earlier in the evening was a sign that read: “Nancy Munoz."

Vitureira tried. Lawyer for ten years in Newark; the state is “out of control”; the state “has a lot of programs we have to get rid of”; we reduced the workforce in Long Hill, we need to reduce the state workforce. State government is too large.”

After a while, a couple of Union County heads rolled sluggishly on necks. As Vitureira spoke, Nancy Munoz looked riveted. Much of the rest of the room fidgeted.

“I will support the next Republican governor in getting rid of COAH,” Vitureira railed. “I can be a good team member. I’ve been fighting in the trenches as a mayor to save our taxpayers’ money. The governor and the Democrats are not fulfilling their financial responsibilities. As a fiscal conservative, I share your values.”

A little later the contest was over, the votes retrieved from the wooden boxes and counted, and Kean stoodat the front of the room between Bramnick and Nancy Munoz, who said she was honored. 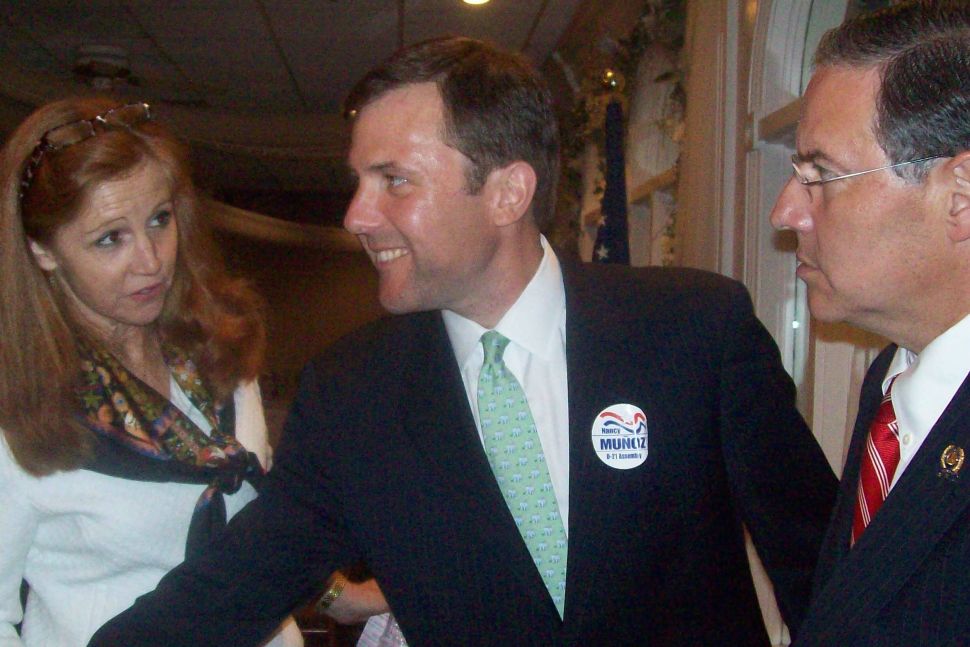