EDISON – When a candidate few have heard of suddenly appears in a mayoral race that features two already entrenched sides, an observer’s jaded assessment might be that such a candidate is certainly someone’s stalking horse.

But union carpenter William "Willie" Araujo says he’s just a concerned taxpaying father of two who’s doing what any citizen entrusted with this form of government would do given a chance.

“I’m running because I wanted to make a difference,” said Araujo, who recounted the classic wife and kitchen table type conservation that went, in his words, from small to serious when he heard the question, “Why don’t you run for mayor?,” and decided it wasn’t a bad idea.

Propelled into the Democratic Primary, “I’m an honest guy,” said the 38-year old mayoral candidate, a Portuguese American who was born and raised in the Down Neck section of Newark and has raised his family in Edison.

Both the campaigns of Mayor Jun Choi and Councilwoman Antonia “Toni” Ricigliano say they have no reason to believe Araujo is anything other than what he says he is: a genuine nice guy looking to be more involved in his town and take a crack and lowering taxes.

“When I heard he was campaigning, I placed a call to him, and I met with him at the Plaza Diner,” said Ricigliano. “He came from church, impeccably dressed. I thought he seems like a very nice young man – very idealistic. Our ideas are very much the same. I told him, I think you’re going to take votes from me. He was very well-spoken and seems to have town’s best interests at heart.”

Ricigliano asked Araujo to back her and he seemed receptive.

“I sat down with (local Democratic Party Chair) Doc Paterniti,” said Araujo. “He’s a really brilliant guy for his age. He said if I would have come to him before the committee screening on March 6, I might have had a place. Toni Ricigliano said, ‘I would have picked you as a candidate to run.’”

But soon after their diner meeting, “I told her I’m going to run. I respect Jun Choi and I respect Toni Ricigliano. The only beef I have is taxes recently haven’t been controlled as they have in other years.”

"This is what happened with Choi," said Ricigliano. "He didn't have any experience – just a short time onthe committee."

The Choi team said Araujo’s presence in the Democratic Primary came as a surprise.

“We certainly have had no conversations with him,” said campaign spokesman Mike Barfield. “If people want to run, we’d never discourage that.”

Barfield said he does not believe Araujo inures necessarily to the benefit of either Choi or Ricigliano. Choi is the incumbent who maintains high visibility on his town, and Ricigliano is a well-known Edison diehard.

“I actually got blisters on my feet from knocking on doors,” said Araujo, who said he's not going to spend more than $1,000 on his campaign. “I’m not a shield for Jun Choi or Toni Ricigliano. I won’t campaign strategically to benefit one candidate or the other. I’m in to win. I’ll do one district at a time. I want to go there with a fresh and open mind. I’m running alone because I don’t want to pressure anybody on the council. I don’t want to have people on there I control. If there’s a tie, I’ll break it. I got people telling me I’ll hurt Choi, others telling me I’ll hurt Ricigliano. All it is, is I’m running. I can’t back down.” 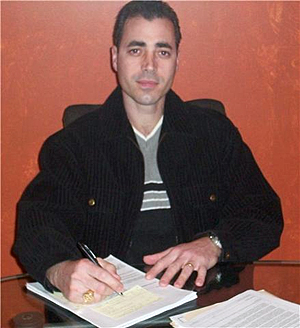