TRENTON – Notwithstanding an 11th hour campaign effort to woo the African American community through church leadership contacts, the quiet terror in some Democratic Party circles that Gov. Jon Corzine’s candidacy has stalled irredeemably and creates little barriers-breaking hoopla in urban cities, prompted Trenton Mayor Doug Palmer today to defend the governor and call for an end to the negative back chatter, even as state Sen. Ronald Rice (D-Newark), chair of the Legislative Black Caucus, maintained his resistance.

Palmer said there is much the governor must accomplish to be viable in urban New Jersey in a close contest, but he’s confident about Corzine’s ability to get it done between now and Election Day.

“Certainly he’s down in the polls because of the economy and on top of the economy everyday there is a story about the public employees’ furloughs and that’s hurting his base – the unions and families – and so he’s suffering a double whammy, but if you’re going to be behind, now is the time to be behind,” said the veteran mayor, a short-list candidate for lieutenant governor.

“Democrats need to stop whining and wringing their hands and saying what they don’t like about the governor and get behind him,” said Palmer, as today’s Quinnipiac University Poll shows Corzine trailing Republican gubernatorial frontrunner Chris Christie by7 points. “This is the worst time to be a CEO of a corporation. People are distrustful of government – and for legitimate reasons.”

If they intend to win, Corzine needs to reach more urgently out to mayors and connect with their political organizations, said Palmer. There are also some practical big and small-view policy measures he needs to undertake, too, such as reducing driving surcharges and fines – which Palmer says are devastating the poor – and more aggressively and tangibly directing federal stimulus dollars to the state’s urban areas.

Finally, Palmer said the governor needs to express one vision for New Jersey that builds on the essential and diverse political strengths of the Democratic Party, which are blatantly not there on the Republican side, in his view. Rather than assuming he has his urban base while running to appease suburban white voters, Corzine needs to hone and amplify a metro economic message, said the mayor.

“Gov. Corzine is not the most charismatic person, but he’s strong and courageous,” argued Palmer. “The Republican Party seems to have been the party of ‘no’ and extremism, and when you look at this state and see the opportunity for metro economies to grow, Democrats are better positioned to say why it’s important to build cities and help reduce sprawl. If you can build Trenton you don’t have to build more suburban sprawl. Democrats have shown a willingness to try to invest that way. Strong cities are good for all of New Jersey, and that’s how the issue needs to be framed.

People don’t want to continue to fight Planning Boards and school taxes, they want to believe they can see a Trenton, an East Orange or Newark come back. If Trenton is strong economically, Hamilton is stronger. Corzine can lead because of this vision. It’s a tremendous opportunity.”

If only it were that easy, says Rice, who from his vantage point within the Statehouse says Corzine’s troubles within his own party are directly related to the governor’s failure to resolve longstanding issues between the building and trades unions on the one side and minorities and women on the other.

Newark Mayor Cory Booker heralds Corzine’s work in the cities as the “great, untold story” of his tenure, but Rice the West Ward-rooted veteran targets Corzine for what he sees as the same transgression he sees Booker commit: namely the acceptance of old guard structures that stand in the way of people power.

“I intend to meet with the governor as chairman of the Legislative Black Caucus, as everybody, including Stevie Wonder can see women and minorities aren’t participating,” said Rice. “If you can’t bring people to the table, you shouldn’t be in office in the first place. What I’m saying is we have to be included in the process and the governor needs to monitor and enforce relationships with labor. I’m supposed to go out there and rally for him, but where’s the message? Where’s the hope? You see all the contracts Kramer gets in this state, but you never see any African American workers on their work sites. I want to see the rules enforced by way of executive order.”

Rice has repeatedly made it clear he wants Corzine to select an African American as his running mate and says Corzine need not look any further than his own cabinet and Michellene Davis to tap the imagination of 12% of New Jersey’s population.

“An African American woman would send a very powerful message,” said the senator. “We got behind Menendez because we had to break that glass ceiling at the top – that Latino glass ceiling. We did that. Now we need to do that on the African American side. All this talk about the Steve Sweeneys and those folks, I can’t live with the politics of that. I’m not sure that’s in the best interest of New Jersey. You know (Republican contender Chris) Christie’s going to have a woman. You need someone to push back. You need someone who can bark just as much as a Beck.”

As for Christie’s candidacy, Rice dismissed whatever merits the former U.S. Attorney may try to sell in the general election – if he gets there.

“I don’t like double standards, ok,” said Rice, but whole-hearted support for Corzine is no given, he maintained.

Apparently not as interested in delving into the reasons why Corzine can’t generate love in his own party, Assemblywoman Grace Spencer (D-Newark) assumed the point position this week with an attack on Christie’s refusal to refund taxpayer matching funds and campaign contributions he received from partners in the same Roseland Law Firm which Christie as U.S. Attorney awarded a multi-million dollar no-bid monitoring contract.

"No-bid contracts cannot be given out in order to receive favors in return,” said Spencer. “In this case, the recipients of the no-bid contract contributed the maximum campaign contributions and then threw a fundraiser to solicit contributions from others as well. This is pay-to-play. It's the kind of practice Christie condemned and investigated as U.S. Attorney, and now he is engaged in the same sordid practice. It's hypocritical, and it's corrupt. …We are waiting for him to put our taxpayer money where his mouth is. He's a big talker; let's see if he's a real doer."

Even though they’re coming from different angles on the issue, at the very least Palmer and Rice agree there’s much Corzine needs to do in order to resoundingly convince urban voters he should return for a second term as governor. 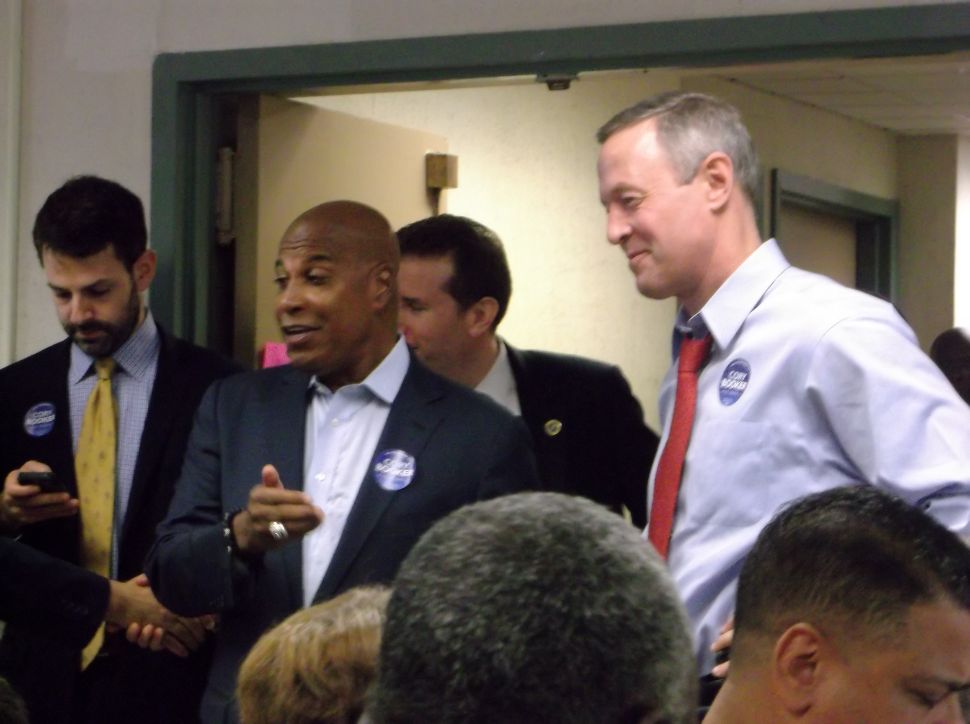