“Never,” the former mayor of Glen Ridge told PolitickerNJ.com in a phone conversation this afternoon. “Anybody who’s ever played chess with me knows I wouldn’t do that.”

But the fact that Bergmanson was laid off at his job as a computer engineer at right around the time he tried to launch his gubernatorial campaign deprived him of what he now says would have been the seed money necessary to get traction in his unlikely effort to take down Corzine.

“The response to my campaign has been universally positive, except for party hacks like (State Party Chairman) Joe Cryan,” said Bergmanson. “I’ve gone to a lot of forums. I’ll go to any forum with anyone, and I got criticism from my own supporters when I spoke at the Trenton tea party but the way I see it, it was an opportunity to discuss our issues. Of course, Corzine hasn’t been at any of them. This guy is beyond arrogant and, sadly, the system sponsors arrogance.”

Although he defers sharply with GOP grassroots candidate Steve Lonegan on social issues, Bergmanson admitted he couldn’t help but be impressed by Lonegan’s organizational ability.

“Any of the people in the race would be a better governor than Corzine, including Uncle Floyd,” said Bergmanson, who’s especially annoyed with the governor because Bergmanson says Corzine promised a constitutional convention if the special session failed.

“It never happened,” said the outlander Democrat. “It’s hard to not take it personally, although the overriding issue is he’s destroying the state. We need someone who’s a bit of a hard ass to do that job, and he’s not. I’m disappointed in the campaign I’ve run. I had hoped to have a lot more money in hand, maybe not $340,000.” 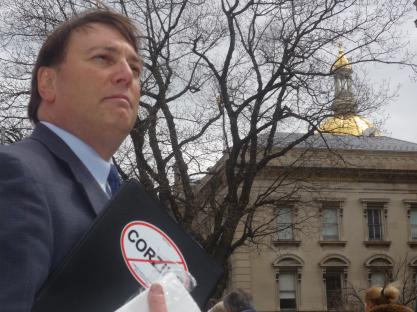