MT. ARLINGTON – Establishment buzz portends at last – and again! – the political demise of veteran Assemblyman Michael Patrick Carroll (R-Morris Twp.) in this cycle as he runs against the son of a Republican workhorse and a popular freeholder, and yet at this 25th Legislative District candidates’ forum tonight, it’s Carroll who injects theatrical pizzazz into a roomful of local GOP diehards, crumbling stiff upper lips into broad grins.

Eschewing the microphone after back-to-back podium performances by Tony Bucco, Jr., and Freeholder Doug Cabana in front of the Mt. Arlington Republican Club, Carroll strides across the dance floor and drives his heels with dramatic impact – equal parts Patrick Henry, Cicero and flamenco- as heprojects his voice from the far side of the banquet room.

“Most new ideas are bad ideas,” he announces, bearing down on Bucco, who has just promised the room he intends to take “fresh” ideas to Trenton.

“We don’t have to look for new ideas we’ve had them from hundreds of years,” Carroll thunders. “We just have to go back to what works.”

Apparently drawing a parallel between what he’s just identified – in his opinion – as Bucco’s empty rhetoric with last year’s presidential campaign of Barack Obama, Carroll quickly works in another oratorical jab.

“How has all this hope and change worked out for you, ladies and gentlemen?” he says, twirling on his heel and striding back across the floor with courtroom panache, staring out behind a beard and bright yellow pro-life tie at an audience of 60 people that includes gubernatorial candidates former Bogota Mayor Steve Lonegan and Assemblyman Richard Merkt (R-Mendham) (Kinnelon GOP chair Larry Casha doubles for former U.S. Attorney Chris Christie).

Offering himself as a fierce Catholic libertarian to the perpetual consternation of those in his party who want him to write bills that attempt to do more than change the name of Clinton Township to Reagan Township, Carroll zeros in on Merkt.

“One person comes close to my record to voting no and there he sits,” says Carroll, pointing at his longtime district-mate and setting off a wave of appreciative handclaps in recognition of Merkt’s 12-year service as he prepares to retire at the end of this term. “We’ve burned out the red light in Trenton.”

Identifying the prospects in the gubernatorial race, “Whether it’s Steve or Chris or Rick, I will be re-elected to serve with a resurgent Republican majority and this time affect reforms we clearly need,” Carroll announces. “California – a solid blue state – just opposed every single tax increase. You know, we should have that right – initiative and referendum, a direct say. I want initiative and referendum. Cuts taxes and spending and cuts the Highlands Act.”

Now just beyond the front door of this hall lies Lake Hopatcong, shining a deep blue in the middle of dark hills that jut all around it and commanding the center of local concerns in this sporting season. It’s lower than usual, a situation caused in part by the Department of Environmental Protection’s (DEP) decision to drain too much and in part by a lack of rainfall.

Seizing on that undercurrent of discontent, Carroll tries to hit another conservative power chord with another double broadside at Obama and Gov. Jon Corzine.

“You look at our former director of the Department of Environmental Protection – Lisa Jackson,” he says, whom he later explains once made a comment to the effect that the residents around the lake are wealthy enough to pay for its upkeep themselves. “Her rank incompetence there promoted her up to EPA commissioner.”

Moments later, it’s over. He gives a fist pump and retreats to the buffet table.

“If you want to be a statesman, you have to be able to compromise,” complains Morris County GOP Chair John Sette in a telephone interview. “I don’t know how a guy who has as many kids as Michael has can demonstrate an inability to compromise to the degree that he does. He’s a wonderful guy, a brilliant guy, but I like Doug and Tony – and that’s just one man’s opinion.”

In the milling around portion of the event, Carroll doubles down on Bucco by referring to a state-funded project the candidate’s senator father tried to pass years ago, over Carroll’s objection.

“I don’t want pork in my district,” Carroll says.

Operating with bigger campaign warchests than the veteran assemblyman as everyone braces for the air war that has not yet begun, Bucco and Cabana take a much more sedate approach in their respective presentations.

“The number one issue is property tax reform,” says Cabana, selling himself as the steady hand with proven countywide cred. “The freeholder board has cut $2 million out of the county budget. You’ll see reduction on county portion of taxes. It’s not much, but it’s a start.”

“We have been taxed and regulated to death,” Bucco tells the crowd. “That is completely unacceptable. I am prepared to go to Trenton with fresh conservative ideas.”

Later, someone gushes about the rhetorical merits of Carroll’s speech and meets a stony rank and file Republican stare attached to a curt off-the-record assessment – “This was a much more animated Michael than usual; he’s scared” – even as several Mt. Arlington Republicans go up to personally congratulate Carroll in the emptying room. 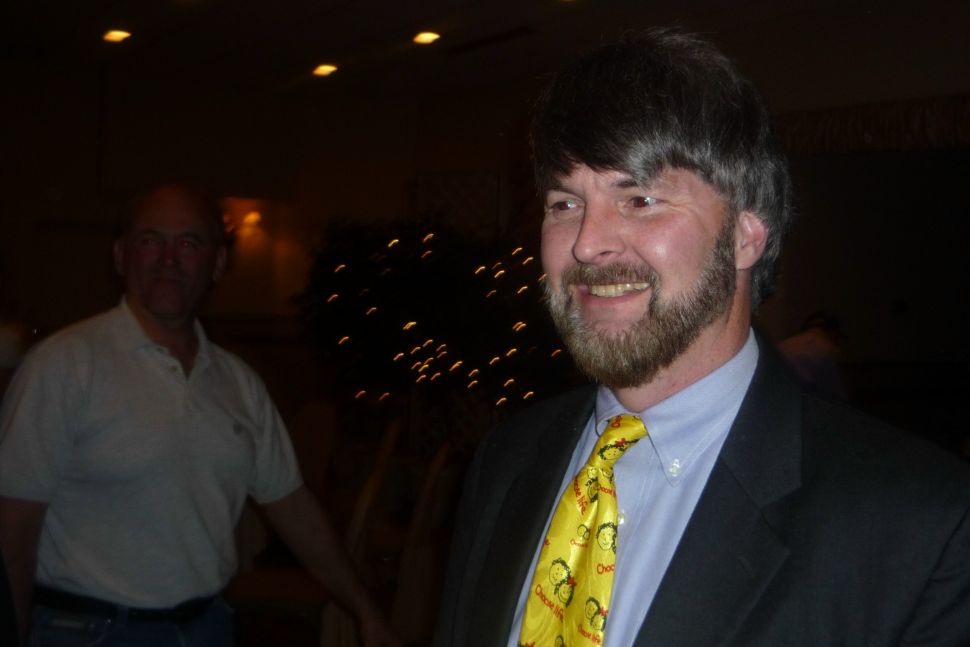