CRANFORD – A day after Mitt Romney gripped a podium and celebrated Chris Christie, the latter was back to the 2008 presidential candidate who by virtue of geography or resume has most frequently and fervently championed the GOP frontrunner for governor.

The appearance with former New York Mayor Rudy Giuliani at a table beside firefighters in the station house on Springfield Avenue occurred as Democrats fired off a press release savaging Christie for daring to promise the eradication of patronage jobs from Trenton while old chum and former Morris County Freeholder John Inglesino nurses a state pension for a $3,000 part-time gig he as a consultant for state Sen. Joe Pennacchio (R-Montville).

“It’s for the two of them to work out, it’s not for me to get into what they know I’m going to change when I’m governor,” said Christie of Inglesino and Pennacchio.

From afar, state Sen. Joe Vitale (D-Woodbridge) demanded that Christie get Pennacchio and Inglesino to produce a “work product,” making public exactly what work Inglesino fulfills in his capacity as a Pennacchio aide de camp.

“Until the Democrats clean their house, they shouldn’t be doing anything with ours,” said Christie, who appeared here today with state Sen. Thomas Kean (R-Westfield), Assemblyman Jon Bramnick (R-Westfield), Cranford Mayor David W. Robinson and Union County GOP Chair Phil Morin. “I’d like to see the work products released of all aides in Trenton, including those who work for Senator Vitale.”

Vitale later said, "I'll be happy to produce the work products of my staff in detail. Christie should demand the same of Pennachio, though it seems Christie has a secret plan he wont tell anyone about until he becomes Governor."

In this town where Christie and his wife lived for three years in the early stages of their marriage and where Christie practiced law for 17 years, former DA Giuliani’s presence in the fire bay with the chief of police standing near the in-house first responders decked in their dress blues as they kicked around pension issues with Christie, underscored the law enforcement/public safety focus of Christie’s own background as a crimebuster.

“I won’t cut your pensions,” Christie promised the firemen. “We need to make sure your pensions are protected.”

He then reaffirmed his vow to chop political patrons out of the pension system.

“I think you’re a priority,” the mayor told the brace of firemen seated at one of two tables pushed together into an L-shape with the engines looming.

After their discussion, the firefighters and politicians spilled onto the concrete apron above the trout-stocked waters of the Rahway River and posed for pictures before Giuliani and Christie bolted for the next leg of the campaign tour. 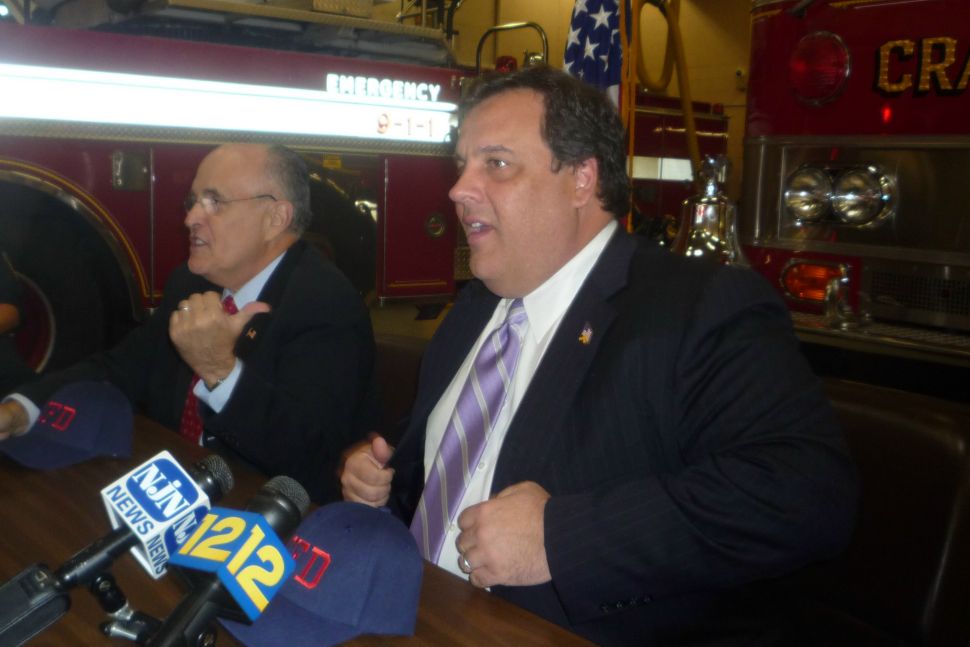