He took a seat.

The two men had shared a stage at Newark’s North Ward Center, and now they were once again in close proximity with the potential for their general election showdown building as Corzine rattled off what he argued were his achievements of particular interest to the Latino community before a receptive crowd of LLANJ members.

Moments later, Christie would seemingly bash Corzine in his absence and make his own case for why Latinos should consider his candidacy, basing his argument in part on his record of choosing minorities for jobs at the U.S. Attorney’s Office and on his commitment to dramatic public education reform.

A progressive, activist outfit founded to shape the next generation of Latino leaders, LLANJ’s core members are irritated with Christie for his lurch rightward during the Republican Primary, including his tough nut stances against in-state tuition and driver’s licenses for undocumented workers and their families. That coupled with Corzine’s abiding good relations with LLANJ and his nomination of the group’s near legendary president, attorney Martin Perez, to the board of the Schools Development Authority, make the former U.S. Attorney a long-shot for the group’s affection. There were stifled moans at the prospect of an in-the-flesh split-screen Republican-Democratic presentation with the news that Christie would accompany Corzine on the scene.

But Perez gave the Republican credit just for showing up, and Christie tried to make the most of his moment in a battle cry speech to the biggest political organization of a Jersey demographic hovering near 14% of the state’s population. The frontrunner for the GOP gubernatorial nomination clearly penetrated sections of the crowd here at Trayes Hall on the Douglass Campus and left a variety of emotions jangling in his wake.

“Anyone who says the educational system serves every child is either naïve or deceitful,” exclaimed Christie. “…You should not stand for a politician who will give you platitudes while presiding over an entire generation of second class citizens.”

In her earlier introduction of the governor, Assemblywoman Nellie Pou (D-Paterson) trumpeted Corzine as the man who appointed five Hispanic Superior Court judges, the state’s first Latina as a county prosecutor, and Robert Menendez to the U.S. Senate seat Corzine vacated to run for governor.

“Diversity makes our state stronger state and it’s quite evident Gov. Corzine knows this,” said Pou. “Hopefully this partnership will continue throughout the years and we will be the stronger for it.”

Corzine made his own case.

“We took a child welfare state that was last in the nation and made it the very best,” the governor said. “If a child doesn’t have health, he or she doesn’t have the ability to be successful. We believe in healthcare for every child, and that’s why we fought for the State Children’s Health Insurance Program.

“America has always had an open door for immigrants,” he added. “All of us have come from a different place and we need to encourage that welcoming.”

When Corzine mentioned that he had been an original sponsor of the Dream Act while he served as a member of the U.S. Senate, the crowd applauded.

News headlines gave the Democratic incumbent yet another opportunity to nail a motherload of claps, in contrast to Christie, who had twittered earlier in the evening that Sonia Sotomayor wouldn’t be his choice for the U.S. Supreme Court, denouncing as racist some of her statements.

Corzine in front of the crowd seized on President Barack Obama’s choice as a great moment.

“Si, se puede,” he cried, footnoting Cesar Chavez. “Yes, she can and yes, she will be. She is prepared and qualified and ready to go. It also helps that she went to Princeton. …I am certain her nomination will be expedited and moved this summer.”

Howls of happiness rained, and at the end of it the governor received a standing ovation, with Christie, chummed up at a table that included Monmouth County Prosecutor Luis Valentin, among the first to lift himself out of his chair.

“Goodnight, everybody,” called Corzine, hurrying through a side door. In his remarks, he had made just one reference to his would-be rival, seeing him on the other side of the dance floor, and pledging to work across the aisle.

Now it was Christie’s turn.

Master of Ceremonies Dr. Frank Argote-Freyre offered up the GOP gubernatorial candidate as a “crime fighter extraordinaire, and Perez gave Christie his own drum roll by reminding the audience that the former U.S. Attorney’s aggressive lock down of corrupt politicians cleared a path for up-and-comers like Perth Amboy Mayor Wilda Diaz and Assemblywoman Annette Quijano (D-Elizabeth).

“He’s probably one of the best U.S. Attorneys in the nation,” Perez said.

Christie alighted onstage and told the crowd that when he became U.S. Attorney, it was “the whitest, malest office I have ever seen.”

One of those people was Valentin, who Christie recommended to then-Gov. Richard Codey for a job as county prosecutor. Due for appointment as prosecutor of Passaic County, Camilla Valdez is another example.

Some heads jerked to attention too when Christie reminded people of the tongue lashing he gave Morristown Mayor Donald Cresitello on the issue of illegal immigration.

“When I saw demagoguery, I spoke out against it,” said Christie of Cresitello’s demand of a stepped-up federal response to undocumented workers in his hometown.

“His exploitation of certain issues was that of a demagogue, and I called him on it, and I wear as a badge of honor that I called Don Cresitello what he is,” the former U.S. Attorney said of the mayor who’s waging a hard-boiled re-election campaign.

Christie fielded some boos as he finished. A few chairs screeched as their occupants rose to applaud.

Introduced by Argote-Freyre as the “Jorge Washington” of LLANJ, who built the seedlings of the operation out of bar conversations a decade ago, Perez thanked Corzine for his support and was careful to note, “We have supported him, too.”

But when the podium where Corzine and then Christie had stood disappeared and both candidates were gone and Ray Rodriguez y Swing Sabroso took the stage, their rhythms buried all political subtlety, demagoguery and eloquence alike as half the room mobbed the dance floor. 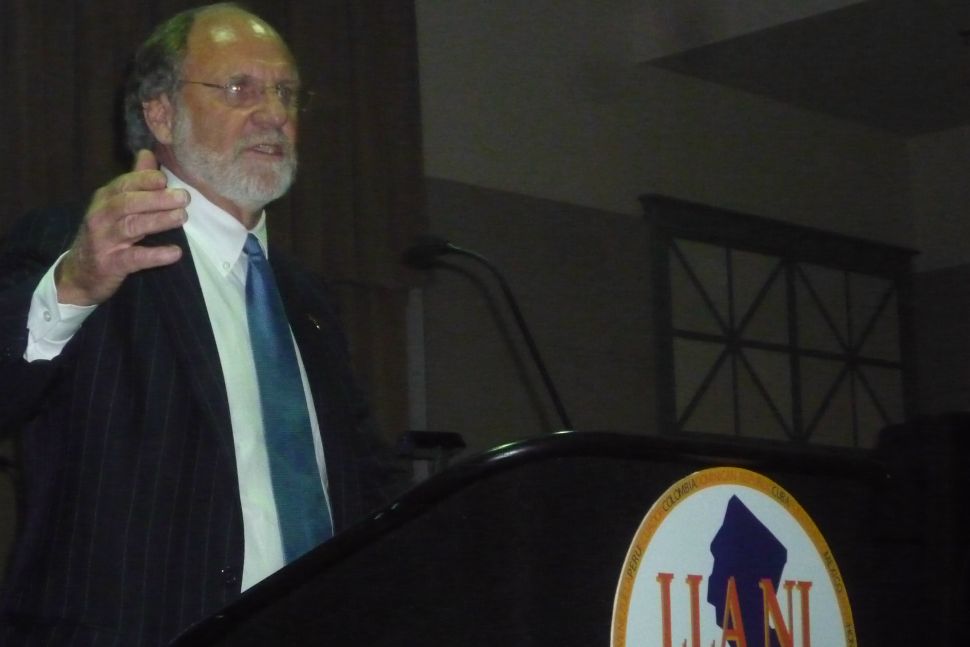