MIDDLETOWN -A familiarblack bus pulled onto the street next to Bachstadt's Tavern and when Chris Christie and his family entered, the gravitas soundtrack kicked in with the bass lines heavy and a real bagpiper marching and trying to make himself heard and the accompanying cheers sustained and suggestive of imminent establishment victory.

Still, after state Sen. Joe Kyrillos (R-Middletown) handed Christie the microphone, the frontrunner for the Republican nomination for governor focused the crowd on the next 72 hours.

Christie intends to bulk up his troop strength to finish anti-establishment movement conservative Steve Lonegan in this coming Tuesday's election. "We've got to get the voters out," Christie said. "If we get our voters out, we're going to have a big victory on Tuesday."

In this Bayshore watering hole that backs up nearly to the salt water, there were no angry words for Lonegan, no final oratorical elbow slams at a man who two weeks ago trailed Christie by 23 points, according to Quinnipiac. On this leg of the campaign's statewide last weekend journey between Parsippany and Wall, the former mayor of Bogota felt like the former 2009 candidate for governor as Christie trained his and the audience's sights on the Democrats and their incumbent governor.

"Who runs our party, us, or Jon Corzine?" Christie demanded.

Christie said he wants to ship Corzine back to Illinois, moments after Kyrillos had urged the crowd to send the governor back to Wall Street.

All the people need, Christie added, "is a leader willing to speak to them, who speaks their language and gives them a government that looks like them: toughand hard-working."

The former U.S. Attorney worked in a criticism of primary rival Assemblyman Richard Merkt (R-Mendham), who in the debates questioned Christie's ability to accomplish anything with a Democratic majority in the legislature.

"I turned to him and said, 'Boy, I'm glad Ronald Reagan didn't feel that way when he was staring at Tip O'Neill," Christie said.

Apparently affronted by Corzine's behavior at a Latino leadership gala dinner last night, the candidate who frequently over the course of this primary left abruptly in the middle or before his rival Republicans spoke, fumed, "He insisted on speaking first, and left before I started. If you nominate me on Tuesday, he's not going to be able to run away from me anymore."

Throughout the campaign, Lonegan complained that Christie was dodging him. He celebrated the opportunity to finallydebate the frontrunner on television and radio, but Merkt's presence in two of those encounters left Lonegan once again battling for attention as opposed to landing steadily on his chief rival.

Resigned to being an underdog until the end, Lonegan campaign strategist Rick Shaftan asked of Christie's Middetown event, "How many people there were elected officials?" adding, "we hardly have any," banking on anti-establishment anger.

In a parking lot in East Brunswick, Shaftan popped the trunkof a minivan and unloaded a stack of copies of "New Jersey Republican News" for late distribution on Saturday, a Lonegan campaign print mediavessel. The May issue shows a front page picture of Rudy Giuliani and the caption, "the 'conservatives' voting for Christie."

But Christie made the argument in the debates that Lonegan had sought the same organizational support Christie sought, only Christie succeeded in securing that support, which only deepened an impression of Lonegan as the outsider; and today, with Lonegan stirring his grassroots organizers and Christie in Bachstadt's and elsewhere embracing party officials and other recognizable GOP faces, the divide was evident with hours to go. 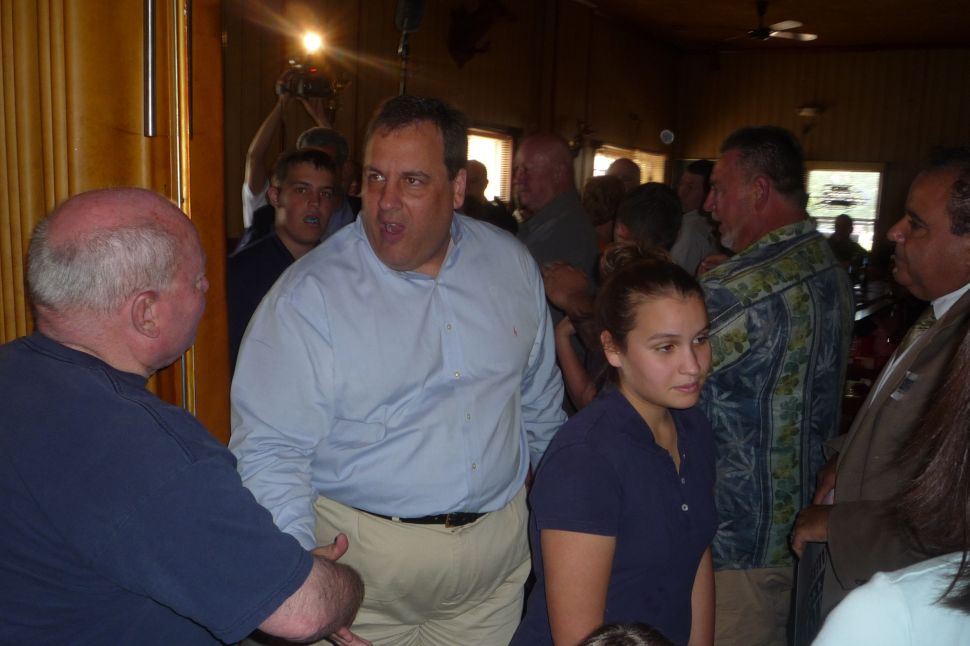