HOBOKEN – With two hours to go and the candidates working it as the ferries and trains arrive under the Clock Tower overloaded with potential voters, a storm comes up suddenly and threatens to short circuit the final lap of this campaign.

People walk with their hands over their eyes to protect themselves from the dust kicked into the air and it’s shocking to anyone who never thought bad weather would be a factor, even if everything else would be in play.

Whoever planned to go vote on the way home surely now has only an overriding desire to get indoors as fast as possible and to stay there, but then a few minutes later, the threat of a storm is over, and everyone reverts to the earlier get-out-the-vote game plan.

2nd Ward Councilwoman Beth Mason campaigns near the ferry. Mike Novak, a candidate for the city council on a slate with At-Large Councilman Peter Cammarano, works a street corner in the 4th Ward.

Early numbers show the 4th Ward generating the most votes. Stands to reason. It’s Councilwoman Dawn Zimmer’s ward and home to some of her most devoted backers. But she never won the ward resoundingly back in 2007, when she needed two runoffs to finally defeat incumbent Councilman Chris Campos. Nearly 50% of the ward contains the projects and Latino neighborhoods where Cammarano, Mason and their respective teams (with Angel Alicea for Cammarano and Raul Morales for Mason) have competed for the affections of those voters who never loved Zimmer.

Cammarano worked that scene overtime today. People said they saw him over at the Housing Authority for extended periods of time.

Mason expects to do well in the 1st Ward, where Councilwoman Terry Castellano backs her, in the 2nd, which is her home ward, and in the 3rd, home base of Councilman Michael Russo and his allies.

“I’ve been in the 3rd Ward all day,” says Russo. “It’s looking good for us. We’re still optimistic that we can win on a first ballot.”

Zimmer greets voters as they get off the PATH trains. She’s accompanied by her husband, their two boys, and her parents, who are down here from New Hampshire. Insiders say Zimmer has some traction in the 5th Ward, where her ally, Councilman Peter Cunningham, is working on her behalf. But Cammarano lives there. As an at-large councilman, he’s everywhere.

Still, voter turnout is low, with one fifth of Hoboken’s total voter population going to the polls as of 2 p.m., and if anyone’s going to vote, he or she has to move now, because right now, even though the winds have died, here comes the rain. 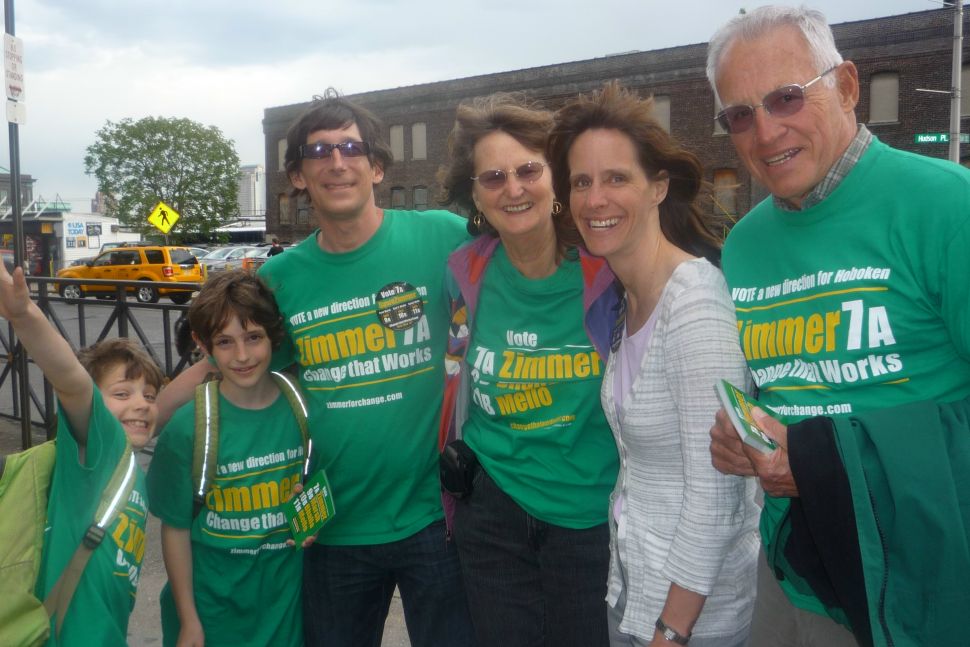