HACKETTSTOWN – Each of the anti-gay marriage, pro-gun, pro-life Republican candidates in the 23rd District Assembly race tried to run to the right of the other two in a radio debate on WRNJ this week, separately railing against taxing and spending in Trenton, while parting company on the gubernatorial contest.

Warren County-based businessman DiMaio beat Hunterdon-based attorney Peterson at a joint Warren-Hunterdon County convention in February. Then they teamed up with Karrow under the auspices of Chris Christie’s gubernatorial campaign.

Like Doherty, Smith, a businessman and Doherty’s chief-of-staff, has been actively campaigning for Lonegan.

DiMaio and Peterson defended Christie as the candidate with the best general election prospects.

“Gov. Corzine is self-funding to whatever level he needs, so we need a candidate who has an advantage (to fight that),” said Peterson. “Based on the polls right now, Chris Christie has been consistently ahead of Jon Corzine from the very beginning, by as many as ten points. His name I.D. as a corruption-busting U.S. Attorney gives him an advantage. He has the best opportunity to beat Jon Corzine. Because of the money advantage, you need a big lead.”

“It’s so important this year that we replace Gov. Corzine,” said DiMaio, who pointed to Democrats’ primary timed efforts targeting Christie in a television advertisement. “…Why is this Mid-Atlantic Leadership fund trying to tear Chris down? Because they know he can beat this governor.”

Smith argued the advantages of Lonegan based on the movement conservative’s promise to deliver dramatic change.

“We have to get a template out there to do something different,” said Smith, who celebrated Lonegan’s flat tax proposal and his vow to slash state government by 20%. 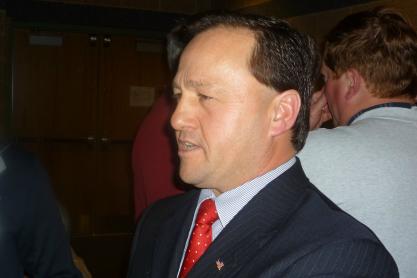