RARITAN TWP. – Assemblyman Mike Doherty (R-Washington Twp.) swings onto a road that must have been full blown farm country ten years ago that now has that creeping suburban bedroom community feeling to it among some last standing barns and cornrows.

“The only people who care where you’re from are the party insiders,” says the Essex County native, who moved out here to God’s country following his service in the U.S. Army. His eyes dart from the list of registered Republicans back to the road as his sedan slices through the rain, bumps over the lip of yet another driveway and rolls to a stop behind a two-car garage.

Doherty knows all about the party insiders, having beaten his head against their structures in several elections, won, and lost in heart-breaking fashion on that bitter afternoon in mid-January.

So, he’s going directly to the voters. “I’ve always done it this way,” he announces.

Doherty the self-styled principled interloper and staunch Irish Catholic, Reagan conservative, Jacksonian Republican, pro-life populist conservative and proud veteran attributes the beat-down native daughter state Sen. Marcia Karrow (R-Raritan Twp.) laid on him at the Hunterdon-Warren County convention to her connections: the fact that her father was a county committeeman for 50 years, to the close ties between Karrow and Hunterdon County GOP Chairman Henry Kuhl, and his own running afoul of the Chamberlain clan in his own Warren County portion of the district.

“Because I backed Pat Kolb over the Chamberlain’s son for county clerk, a lot of these guys circled back to expunge me,” he says.

When the county committee vote came down that day, a shell-shocked Doherty stood front and center, posture perfect, as reporters and well-wishers mobbed Karrow, the victor, and he vowed to follow through with his word to run, to hell with the consequences – “wild horses couldn’t keep me out of that primary,” he said – and now he’s one week removed from Election Day and the prospect of moving up against a monolith or getting bumped.

If it’s the end for the patent attorney who first ran for office in 1999 as part of a same-party uprising against Gov. Christie Todd Whitman, one of his devoted allies, state Sen. Kevin O’Toole (R-Cedar Grove) proclaims that at least his old pal with eight years of experience in the Assembly will have gone down fighting, which is kind of the way he came to politics to begin with: right winging it or to hell with it.

“Mike’s not the kind of guy to put in 30-40 years of compromise before getting wheeled out of Trenton or dragged out in a body bag, for that matter,” said O’Toole in the lead up to Doherty’s losing convention effort.

But if Doherty’s grim re-entrenchment against the machinery of his party looked gutsy in January, his prime-time surfacing at the side of Steve Lonegan, 23 points down in the polls to Karrow running mate establishment Republican Chris Christie, according to last week’s Quinnipiac University numbers – along with the Karrow campaign’s attempt to depict him as a Ron Paul oddball who supported “surrender in Iraq,” of all things, make his decision to gut it out look close to political suicide.

Or just one more reason to keep it revved up on his unlikely way to beating Karrow, which is, of course, the way Doherty reads the terrain.

“This decision of Marcia’s to target my support of Ron Paul (who voted against the 2002 resolution authorizing the use of force in Iraq) is sort of despicable,” says Doherty, backing down a driveway and cruising through Karrow’s hometown of Raritan Township on Tuesday evening on another nightly door-to-door campaign swing.

“I don’t agree with Ron Paul on every issue,” Doherty adds. “I think our family service (himself a veteran with three sons in three branches of the armed forces, including a Marine who just returned from his tour in Iraq) speaks for itself, but Ron Paul correctly predicted this financial crisis we’re in, and as a veteran who loves his country, he understands that without a declaration of war, you’re not supposed to commit troops to foreign soil. It’s disingenuous to take those issues in a vacuum.”

Doherty chafes at the Karrow campaign’s decision to release a mail piece and robocall, both calling into question Doherty’s patriotism on Memorial Day.

“It’s ridiculous,” he says. “How about attacking me on the issues? Of course, she can’ do it. I’m the pro-life conservative in the district. When Marcia was on the freeholder board, taxes went up 65.87%. When I was on the board, taxes went up 1.37%, well below the rate of inflation. I’m the only guy in this race who was endorsed by New Jersey Right to Life.”

Lonegan immediately condemned Karrow’s two-pronged Memorial Day assault, going right into Christie’s wheelhouse in fact with a press conference staged outside the frontrunner’s campaign headquarters. Doherty liked that – Lonegan sticking up for him.

He’s only too happy to stick by Lonegan.

“Lonegan’s been out there leading the conservative fight for ten years,” he says. “I’m proud of the Lonegan effort. Quite frankly, there haven’t been enough Republicans who have been truly conservative. That’s why I’m going to win, and if I don’t, so what? At least I stood up for what I thought was right. I believe in loyalty, and I believe Steve Lonegan would make the dramatic changes we need in New Jersey.”

Doherty drives past the Kuhl egg processing plant, and it’s one more reminder – for all the new development – of the district’s farming foundation that wilted under Doherty’s full-throated bark-out-to-the-troops delivery at the convention and instead embraced Karrow’s hay bale appeal.

“I always beat her in her hometown, and I intend to do it again,” says Doherty, grabbing another stack of mailers with his picture from West Point graduation on them and running up to the door of another house in the rain. 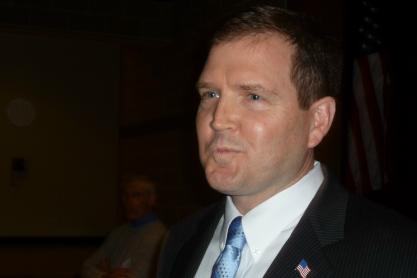