At the “go” signal from the League of Women Voters moderator, Dougherty comes right out of his chair and starts wailing on Cresitello: the town has a leadership problem and decisions are being made for personal gain, not for the good of the town.

“My vision as mayor includes you,” Dougherty, a 50-year old chief engineer at the Prudential Center, tells the crowd. “As mayor, I will listen to Morristown. As President Kennedy said, ‘Change is the law of life.’”

Cresitello, 63, a contractor seeking his second straight term in office, hammers right back when he goes to the podium. The mayor has said throughout this contest that his challenger doesn’t have the “business acumen” to run a complex town like this one.

“I am qualified to be your mayor because of my experience,” he says. Forty-five years in private business. Over 30 years in government.”

He proudly fronts the budgets he’s presented over the last three years and in the face of grumbling criticism out there that he’s sitting on the forthcoming document because bad news is imminent. That’s not the case, he insists. After presiding over tax increases of zero, zero and 1.7%, Cresitello says he estimates this year’s fiscal budget will require a two to four percent tax increase.

The place is packed. A crowd that earlier gathered for the City Council debate has settled in here and studies the two men seated on other end of the long table on the stage at the front of the room.

But Dougherty gnaws on Cresitello’s crowning achievement: the town’s supposed fiscal health in the midst of a recession.

“Where’s the budget?” the challenger wants to know. “It’s hard to talk about the budget. They lost those tax appeals. They have to wait for tax appeals. It would have been much more helpful to a candidate running had we had the budget to look at it and to know the real numbers we’ll be facing next year. I think we’re looking at something much bigger than a two to four percent tax increase.”

“I understand the global economy,” he says. “Morristown like other municipalities is facing a shortfall. There is no possible way to know about the tax appeal, which was being handled by a supporter of one of my opponents, who I fired by the way for excessive costs. If you don’t understand that, you shouldn’t be running for mayor.”

The next question coming out of the audience is a direct slam at Cresitello and his controversial advocacy of deputizing local police officers to fight an influx of undocumented workers: would you focus on trying to implement federal laws while failing to fulfill your local responsibilities?

“All municipal officers have the inherent authority to enforce federal law,” the mayor shrugs, then fields the second part of the double blast line of questioning from the moderator when she asks him if he intends to seek a raise. This is another cringe question for Cresitello as he unsuccessfully sought a raise on at least two occasions.

“I do not intend to ask for an increase in my salary over the next four years,” he says.

Dougherty pulls his punch, taking the opportunity only to note that Cresitello jeered at petitioners who sought at the time to block his salary hike.

His attitude “goes to the core of what I’m running on: respecting citizens’ input, and respecting how their voices are heard.” Moments later, Dougherty recounts his walks through the streets of Morristown while campaigning, and pokes Cresitello when he describes listening to a resident who told him that it had been a long time since he saw an elected official in the neighborhood.

“You make proposals when you’re mayor,” he says. “When there was opposition to the public works garage in the 2nd Ward, I decided to relocate it in Hanover Township. …Morristown is on the move. It’s one of the few towns that has a solar project. Donald Cresitello has been invited to speak at Princeton, Yale and Drew because people beyond Morristown understand what I bring to Morristown, because of years of training!

“And I intend to continue to serve the people of Morristown,” he adds. “My cellphone is on 24 hours a day.”

“Today, I believe we need a change,” he says. “For months I have met with hundreds of residents. What they appreciate most is being heard. People should believe in their government and not feel intimidated to speak their mind. Mayor Cresitello forgets, it’s not about him. It’s not about me.”

The packed house gives Dougherty a roaring applause of approval over a League member who opens her mouth to issue a stern warning in vain as the event ends amid a shower of whoops and Dougherty crosses the stage to shake the hand of a subdued looking Cresitello. 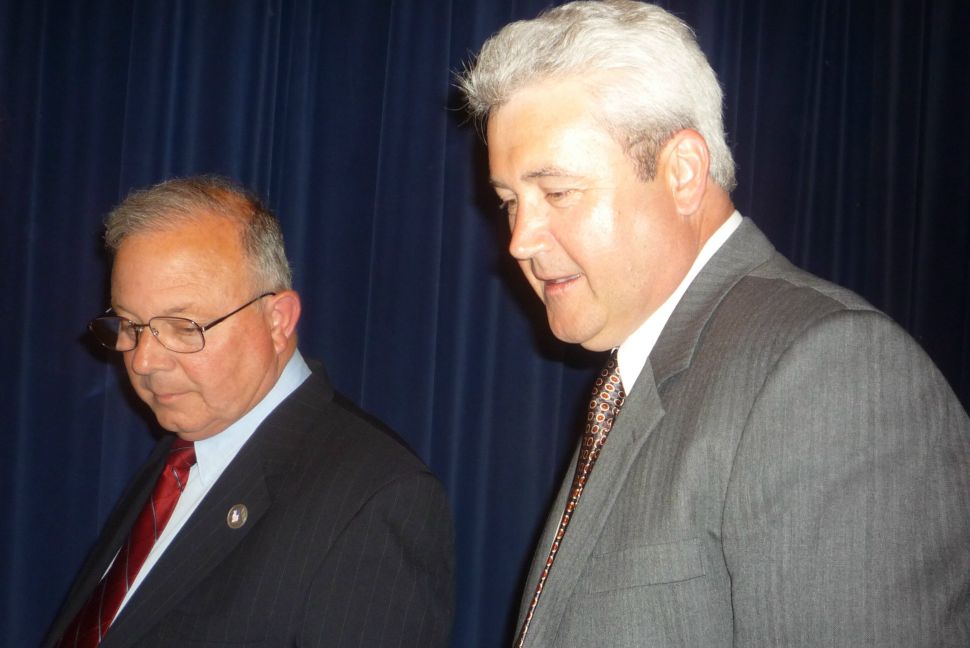