“No disrespect to the City Council, but I believe I can accomplish more where I am now than on the City Council,” said Coutinho. “I have no interest in running for the council. I have zero interest. I’ll be fully supportive of the Booker Team next year.”

“Al is very supportive of me,” Pantoliano said. “He has said in the past that the city would suffer if I were not the councilman. As for Cory, I’ve supported him over the years, and we have a great dialogue and friendship. If he can’t support me because of certain political realities, I understand, but I am trying to win his support.”

Booker is already on record in support of the same team he ran with in 2006 (minus former Councilwoman Dana Rone), including Amador. East Ward Democratic leader Joseph Parlavecchio, Coutinho’s political mentor, said Amador has his full support for re-election to a fourth term.

And Coutinho has publicly endorsed Amador.

“I just had a meeting with the mayor,” Amador said. “We talked for about ten minutes about 2010. Based on the most recent poll, he said the two of are probably the strongest candidates, and that nothing has changed between us. Most elected officials are realists and there is a level of trust I have built with the community. Mr. Pantoliano is a nonentity trying to become an entity. Of couse, everybody’s entitled to run.”

Despite the obvious establishment obstacles, Pantoliano said, “I will do my due diligence to make certain a successful is possible, but all factors are pointing toward a green light.”

Coutinho didn’t deny that he and Amador have experienced friction lately on issues relating to the expansion of the East Ward Democratic Committee and Pantoliano’s role within the organization (Coutinho wants him to have one at the very least, while Amador doesn't want to contribute to legitimating him); and the handling of special events, namely the Portuguese Day Parade, which has long been organized by Coutinho’s father, Bernadino.

None ofthat can crumble their connection, sayboth men.

“I disagree with the councilman on some internal issues, but my goal is to keep the east as unified as possible so we can be a meaningful political entity citywide,” said Coutinho.

“The way I could be most effective is to be at highest level possible, which right now is the Assembly,” the assemblyman added. “I have helped get two schools built in the east ward, I am working on prisoner re-entry issues and tax issues, and I want to continue to stay focused. I want Newark to spend less time fighting with itself and more time addressing the problems of our city. The issues with Councilman Amador are resolvable issues.”

With Booker poised for re-election to a second term, most insiders see North Ward Councilman Anibal Ramos as a potential establishment mayoral candidate in four years if Booker decides to run for governor.

Coutinho won’t deny his own interest in the mayor’s job.

“Down the road, if significant opportunities arrive, I’d entertain that, yes,” he said, “but as of now, my goal is to help the Booker Team, in part by developing and expanding my relationship with Gov. Jon Corzine on behalf of the City of Newark. If the conditions were there at some point, I can’t say I wouldn’t be disinterested, but I’m not making any strategic moves in that direction, and nobody has talked to me about that.” 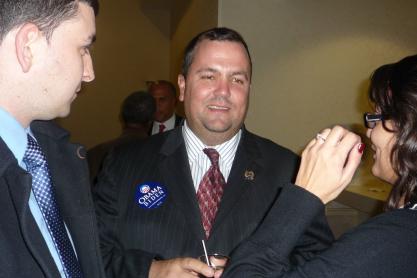