In one of the hardest fought campaigns of the season, a once sleepy-eyed contest has boiled over into a leafy warzone as Mayor Donald Cresitello seeks re-election against Zoning Board Chairman Tim Dougherty in the heart of Morris County.

A 63-year old political animal who told the public he only intended to serve one term as Morristown's chief executive, then sheepishly couldn’t say no to the chance to pursue a second, Cresitello has proudly presided over three straight budgets in which he raised taxes zero, zero, and 1.7%. There’s also a lot of ongoing private sector development in Morristown, providing a striking contrast to much of the rest of the country.

On the downside, Cresitello tried to give himself a raise on several occasions, getting banged up by his own council in the process. He also couldn’t resist an opportunity to run for higher office, jumping quixotically onto a stage in the Democratic Senate Primary last year in a showing that earned him ten percent of the primary vote. And arguably most infamously, he cracked down on undocumented worker stacking in town while leaning rightwardly into the open arms of CNN curmudgeon Lou Dobbs, who fed the mayor national news coverage. Dougherty’s targeting that episode wherever he can, banking on progessives’ resistance to Cresitello on that front in particular in a Democratic Party Primary.

The knock on Dougherty, 50, though, chief engineer at the Prudential Center in Newark, is he hasn’t found a coherent, powerful argument for why the voters should fireCresitello. He thought Cresitello would step graciously aside and allow him to be the unimpeded Democratic nominee for mayor, but when it didn’t happen, the best argument Dougherty could summon against his friend turned foe – at least for the next six days – is that Cresitello lacks transparency.

When he finally fixed on that message coming out of the corner of his opponent, Cresitello went into overdrive to take Dougherty apart as a credible deliverer of that critique, savaging Dougherty with mail and street gossip about his opponent’s efforts to redo his home without obtaining the necessary permits.

Dougherty hit back yesterday, standing on a porch with supporters and announcing his decision to file an ethics complaint against Cresitello with the State Inspector General’s Office. The challenger asserts that the mayor improperly ordered a code enforcement officer onto his property without homeowner approval.

Cresitello is working what he senses is another soft underbelly of Dougherty’s campaign: the latter’s ties to former Mayor Jay Delaney, arguing that Dougherty as a councilman never tried to squarely stare down the Republican mayor, and offering himself as the kind of guy who makes enemies, yes, but makes things run in the process. One of his recent mailers shows a picture of bowl of spinach with the caption that the tough to choke down green vegetable is good for you – just like Cresitello.

The down-ballot alliances of the candidates prove another interesting dimension in this contest. Dougherty’s hooked up with At-Large Councilwoman Michelle Harris-King, an African-American who has a solid base of support in her own 2nd Ward as well as township-wide allies who prize her feisty resistance to Cresitello. Even her opponents say that even in her position off the line, the 12-year veteran’s likely to pull the most voters among the council candidates.

Then there’s At-Large Councilman John Cryan, cousin of the State Party Chairman and scion of the Newark Cryans who for three generations have specialized in a New Jersey cross-section of politics, law enforcement and ale house proprietorship. The young Cryan’s allied with Cresitello.

While they’re working out of the same headquarters, they’re not running a joined-at-the-hip campaign effort. Cryan’s name appears on lawn signs with At-Large Councilman Anthony Cattano, but not with Cresitello, although the councilman insists the complete slate signs will be up as early as this week.

Now Cryan knew it was coming, and this past weekend indeed it did: the youtube video that shows him striding into a local tavern, confronting a guy and appearing to initiate a fight. The incident occurred days into Cryan’s first term as an elected official and last week he groaned apologetically, “I screwed up.”

The mayoral candidates will meet for their first – and only –debate tomorrow night. 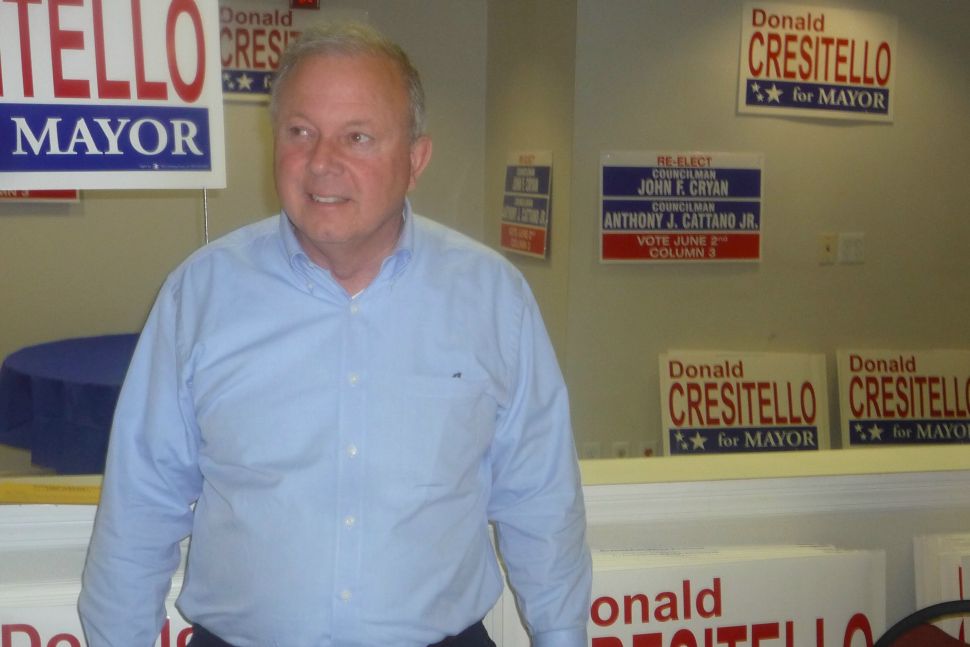