“My opponent has embraced a tax plan that would raise taxes on 70 percent of the people in this state and in my district,” Karrow said. “The median income in my district is about $32,000 per year. People making $32,000 a year will have a tax increase under the plan Mr. Doherty has embraced, in addition to losing their rebates. I don’t how they will survive in this state.”

Doherty stood by Lonegan, particularly when he highlighted his own commitment to revamping Abbott Schools funding and, in his own words, taking on what he described as New Jersey’s activist judiciary.

Given room to wade into each answer in this hour long debate that took place in a little radio station on the outskirts of Hackettstown on the side of Highway 46, Doherty mostly tried to run to Karrow’s right issue by issue.

“The Department of Environmental Protection (DEP) is literally on a war footing with business in the State of New Jersey,” said the assemblyman, who vowed to stay on the pro-business, deregulation fight he’s waged for seven years in Trenton.

“I’m happy to report I voted no on 103 taxes during my time in the legislature,” he boasted.

“This government is totally attached to a spending philosophy,” said the newest member off the Senate Budget Committee. “We need to cut spending. There is serious spending still in this budget that has stifled the growth of this economy (including a zoo in Cumberland County, she targeted). Gov. Jon Corzine has done nothing but grow government.”

But she also repeatedly worked in some digs on Doherty, bragging that as the mayor of Raritan Township in 1998, she worked conservative issues “long before Doherty thought about running for office in Warren County, I’m not even sure Mr. Doherty was living here yet,” and branded her challenger as “completely ineffective,” especially on farmland preservation and Garden State Trust Fund issues – critical in this rural district.

Striking his own contrast with Karrow, Doherty said he wants to expand the Lance Amendment (no state borrowing without voter approval) to include county and municipal government.

“My opponent clearly disagrees with this concept, she does not think local residents or a county or town should approve these discretionary projects like the library, town hall or police headquarters,” Doherty said. 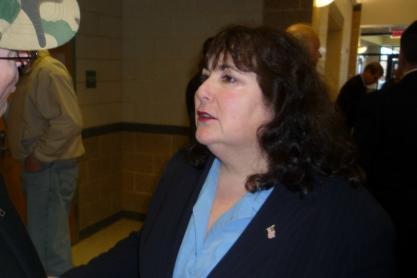