Led to the front of the room by an aide, former Bogota Mayor Steve Lonegan spent several moments groping for the microphone before confessing to the small crowd, “I’m severely visually impaired. I can’t see anyone in front of me, so if anyone wants to flip me the bird, go right ahead. When I was 14, I was diagnosed with retinitis pigmentosa.”

Down 23 points to former U.S. Attorney Chris Christie in the latest Quinnipiac University poll, Team Lonegan insisted their candidate has crumpled up his speech before on the trail, in Toms River, for example, to talk about his blindness, a subject he usually avoids.

“It depends on the mood he gets from his audience,” said campaign strategist Rick Shaftan, who described Lonegan’s Wednesday evening departure from the script as spontaneous.

“Sitting in a doctor’s office, I was told would go blind by the age of 30,” Lonegan told the Mt. Arlington crowd of about 60 people. “My dad died unexpectedly at work, and so we moved in with my grandparents.”

He described how he refused to surrender to becoming a basket weaver at a vocational training school, received inspiration from oil magnate John Paul Getty and Sun Tzu’s “The Art of War,” and transformed himself from showroom salesman into self-made millionaire with his own cabinet-making store, remaining at all times an ardent enemy of big government.

From there he vaulted into his usual stump speech about what he would do as governor. His speech followed one delivered by retiring Assemblyman Richard Merkt (R-Mendham), who earlier sat and watched three men vie for two 25th District Legislative seats, one of which Merkt will vacate at the end of this year.

“It’s been painful watching Dick Codey run circles around his own governor,” said Merkt, trumpeting himself as the only candidate in the race with Statehouse experience – in contrast to Corzine, for example; and descrying state borrowing practiced in confounding bipartisan fashion – in his view – by Gov. Christie Todd Whitman, Gov. Donald DiFrancesco, Gov. Jim McGreevey and Gov. Jon Corzine.

“Chris apologizes for not being here, but any one of the candidates in the Republican Primary would be a whole helluva lot better than what we have down there right now,” he said. “It’s too important that we have a Republican in the governor’s office next year. We need a Republican governor with a veto pen.” 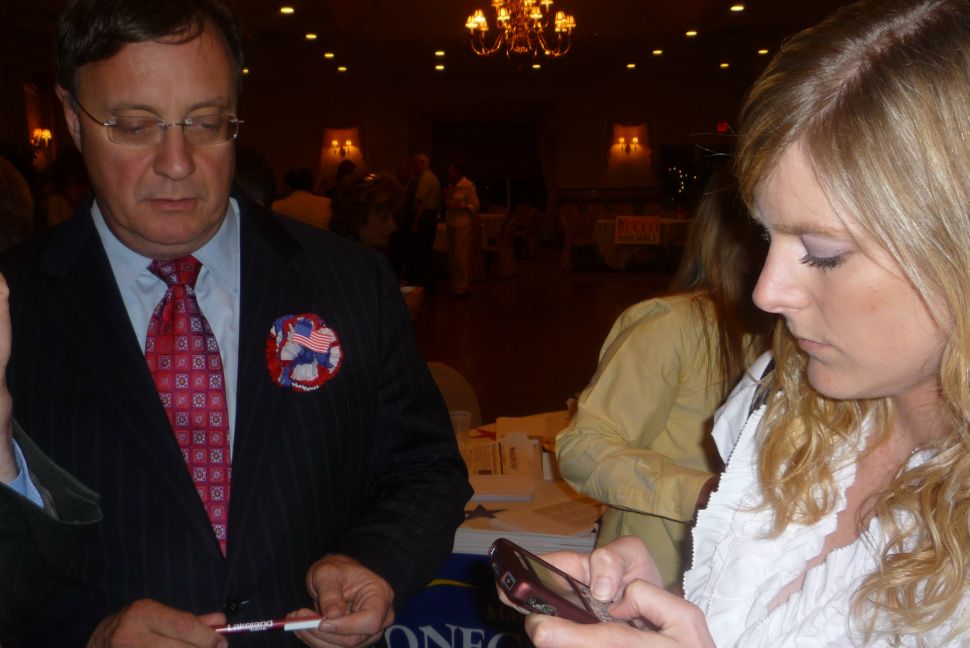