WESTFIELD – The commuters sprint across the rain-spattered parking lot toward the east bound platform and many of them skirt past Bruce Meringolo’s entreaty to stop and meet GOP gubernatorial candidate Steve Longman, but a few slow down and engage the man under the red and white umbrella.

The movement conservative and grassroots organizer who with just one weekend left is fighting frontrunner Chris Christie for his party’s nomination bristles when he hears an accounting of Christie’s latest radio ad. Broadcasting steadily on Millennium radio this morning, the spot amplifies the establishment Republican’s complaint about Lonegan’s flat tax plan, accompanied by the particular condemnation of how the plan would impact rookie cops and firefighters and new teachers.

“And what about two years from now, when that cop is moving up the pay scale and making $60,000?” Lonegan wants to know. “Under my plan, he’ll see a savings. As they move up the income bracket, they will receive tax cuts. For a single person at $43,000, he or she will start to see a savings.”

There are some Lonegan partisans there in the spitting rain. One woman, a “Dump Corzine” button affixed to her yellow raincoat, is infuriated over the Christie campaign’s repeated use of the70% figure to characterize what it calls that bulk of taxpayers who would get hammered with tax hikes under Lonegan’s plan.

“It’s just a manufactured number,” affirms Lonegan, who jokes that in the face of a battery of Mitt Romney and Brett Schundler robo calls on behalf of the Christie camp, he may be forced to retaliate with his mother.

An Associated Press story that broke this week about Christie confidante John Inglesino nursing a politically connected pension leaves Lonegan shaking his head and saying only, “It demonstrates more of the same, and frankly, it’s really disturbing.”

Asked if he symbolically chose ground zero of the Bramick-Senate Minority Leader Thomas Kean (R-Westfield) fortress here in Westfield to kickstart his campaign’s final drive to Tuesday, Lonegan says no. “I’m here because nearly 100% of the taxpayers of Westfield under my plan would get a tax cut,” he says. “My tax plan would benefit Westfield terrifically.”

Another stampede of people breaks from the parking lot for the platform.

“Are you going to New York?” Lonegan asks one woman who pauses to speak to the candidate.

“No, I’m actually here to meet you,” says Susan Judge, who proceeds to tell the candidate about how she and her extended family can barely afford to live here under the weight of property taxes.

A man finally breaks away from a conversation with Lonegan.

“I’m actually a Democrat,” explains Tony LaPorta. “I’m open to all the candidates. I do think if Lonegan were to win on Tuesday…”

“When he does win,” a hovering Lonegan ally corrects.

“…it would be a better campaign for the people of New Jersey,” LaPorta continues. “I think Corzine and Lonegan would offer the best debate of ideas and give the people a true contrast and opportunity to judge fundamental differences.”

He stands near the platform for another wave, another two waves, then Lonegan himself makes a break for the sedan with a Lonegan sign plastered on the driver’s side door, bound for Hackettstown. 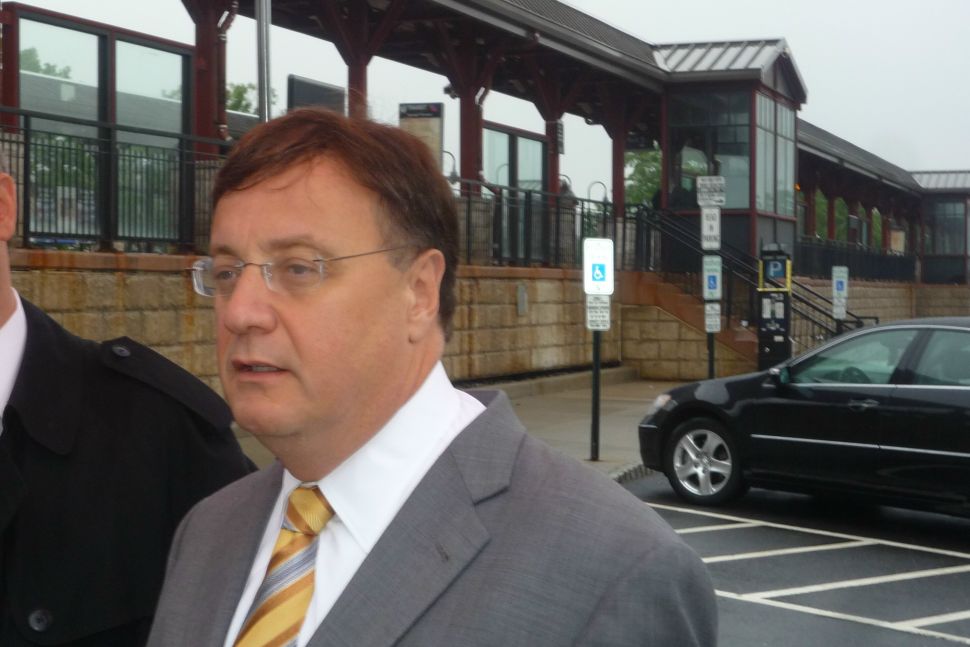