FLEMINGTON – You don’t have to look beyond a stuffed trophy on the wall at the Croton Rod and Gun Club to know they mean business here, as it’s not just the bear head but a torso, arms and paws jutting out of the paneling over the bar and baseball caps and one straw cowboy hat perched on a delighted audience member who claps again as gubernatorial candidate Steve Lonegan tears into another subject.

“In my first four years, two judges will retire and two will be up for confirmation,” says Lonegan, who promises he won’t reconfirm the two who presumably will try to remain on the Supreme Court bench. “I will be appointing the four most conservative judges New Jersey’s ever seen.”

The crowd of about 60 people at this scheduled Hunterdon County meet-and-greet applauds heartily.

The former mayor of Bogota running for governor as the hard-line conservative says as governor he would require each judge to go before the voters every six years. “We’ll keep them in check that way,” he says over the growing applause.

Standing with him up at the front of the room next to an American Flag and a dartboard are Assemblyman Michael Doherty (R-Washington Twp.), primary candidate for state senate in the 23rd District; Doherty’s chief-of-staff Ed Smith, his Assembly running mate; and Jennifer McClurg, their freeholder candidate.

“You know, Mike’s right,” Lonegan says. “This whole global warming thing is a sham. It’s false science designed to drive manufacturing out of this country.”

“Just like the liberals have driven their agenda, we’ll push back the other way,” declares the candidate, who right now straddles time between his debate last night with GOP gubernatorial rival Chris Christie and their other televised encounter, which they tape this coming Saturday.

“Right now the people running the state are a bunch of socialists – ‘workers of the world unite’,” Lonegan says. “That’s the message. We’re up against a shift away from free market capitalism to socialism.”

His wife’s a teacher – and lest that provoke any sudden mood-killing groans, Lonegan hastens to add that she’s the handgun-trained sharpshooter in the family. With the audience warmed by that fact, he admits – full disclosure – that his daughter too is a teacher.

But as governor he will not back down from the unions and he will not hesitate to get rid of the “dead wood” hiding behind tenure with their feet up on the desks, because as things now stand, “you can’t recognize and reward productivity.”

“I love refineries,” he adds with a smile. “They reek of jobs.”

Doherty jumps in at this point and takes the proffered microphone from Lonegan.

“There are tremendous oil fields off our coast just waiting there and saying, ‘come and get us,’” argues the state senate candidate, who’s running against Sen. Marcia Karrow (R-Raritan Twp.) as the anti-establishment candidate. “It’s almost like an evil force descending on America right now wearing the jacket of environmentalists.”

“We’re losing OBGYNs left and right,” he says. “It’s getting to the point where you have to fly to India to have a baby. I just hope they’re still a citizen when they come back.”

Roused by a question about undocumented workers, Doherty criticizes Christie.

“The other candidate – it’s questionable if he’s going to enforce our immigration laws,” says Doherty, referring to Christie’s statement as U.S. Attorney that undocumented workers are not guilty of a criminal offense. “We have to turn that around or we’re going to lose our country.”

“Liberals treat illegal aliens like they’re a canonized group,” he says. “They say, ‘We need them to cut our grass and do manual labor and take care of the elderly, and do those jobs Americans won’t do.’ Well, I’ll tell you, I must be a freak or something, because I worked my way through college cutting grass…”

The cheers nearly bring people out of their chairs.

“…and washing dishes and then after that, I built houses,” Lonegan yells. “I’ll tell you this, if we can put young Americans in Humvees and put them in harm’s way, and you know there’s no job they won’t do for us – then there’s no job Americans shouldn’t be willing to do.”

He may not be back to this rural outcropping on the western edge of Flemington with three weeks remaining before the primary, he tells his supporters.

So he tells them again – and by way of motivation – the story of his arrest last year in Middle Township when he protested the governor’s toll roads plan on school property, and the police arrested him, and his voice shakes as he appeals to a fighting spirit lost somewhere and says when they cuffed him and left him there for an hour and a half, they interfered with the rights of an American, a proud one – and the wrong one. And the crowd unleashes one last burst of emotion at the Croton Rod and Gun Club. 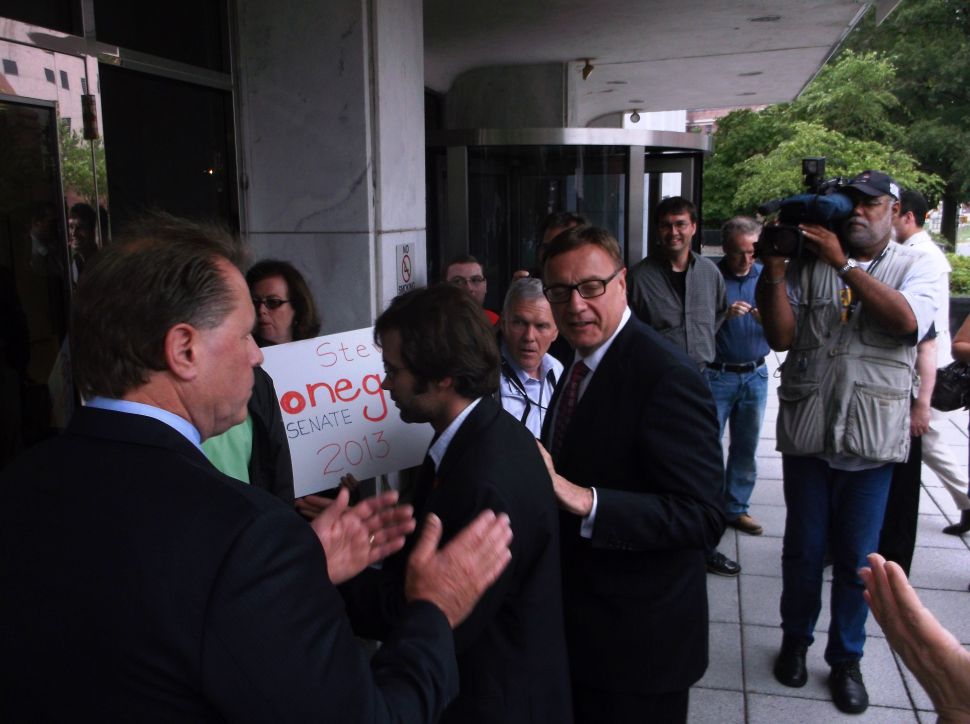